The citizens of Zimbabwe are calling for an end to the predatory, rapacious and brutal military regime that has thrown their country into despair and misery

Zimbabweans plan to take to the streets on 31 July to protest against state corruption. Economic conditions are dire, with inflation surging to 737.3% in June alone and civil liberties tentatively restored after Mugabe’s ousting, are being systematically trampled on again. Economic mismanagement reached new heights when the ruling party shut down the securities exchange and mobile money transactions on which up to 90% of Zimbabwe’s citizens rely. Formal sector employment has all but dried up.

The ruling party, Zanu-PF, has been in power since 1980 and has indicated that it will respond ruthlessly to protest. It is also trying to pre-empt matters by peddling the conspiracy theory – a favourite authoritarian tactic – that the demonstrations are a western-funded plot to amplify the spread of COVID-19 in Zimbabwe.

The pandemic is also a useful smokescreen behind which to shut cities down and abandon the rule of law entirely. Changes to the 2013 constitution, aimed at introducing restrictions on the right of assembly, are being smuggled in under the guise of lockdown restrictions, along with extensive looting of donor funds. The ruling party remains ruthless against dissent.

Emmerson Mnangagwa, the incumbent autocrat, came to power through a military coup in 2017, upending the rule of Robert Mugabe, which had lasted for 37 years. Promising to introduce a ‘New Dispensation’ that would bring an end to the latest spiral of economic dislocation and oppression, it became apparent that the 93-year old (at the time) intended to rule for life. As eminent historian Martin Meredith put it:

‘Although prone to falling asleep in meetings and afflicted by memory lapses, he still clung to power with the same determination and ruthlessness that had marked his political career from the start.’

Mugabe had consolidated his corrupted and authoritarian rule over time as challengers arose. Very few autocrats that have been in power for that long succumb to internal coups, though. They tend to either die in office (ill health) or are eliminated by external forces. Mugabe’s strategic mistake, however, was to position his wife, Grace, and her upstart coalition (the ‘G40’ faction), in positions of power ahead of military loyalists (the ‘Lacoste’ faction). He fired his Vice President – Mnangagwa – who had been his chief enforcer and a key player in the security establishment since the beginning. Together, Mnangagwa and the army generals then launched a coup that they all claimed was not a coup, placing Mugabe under house arrest. For six days, Mugabe threw the country into confusion by accepting and refusing to step down at the same time. Eventually he departed and Mnangagwa took control. After rigging the elections in 2018, he became the state president – another autocrat subverting ‘democratic’ institutions to advance authoritarian ends.

In the same year, Angolan autocrat José Eduardo dos Santos also succumbed to an internal coup (after 38 years), making a similar strategic mistake of placing his children in positions of power and influence ahead of established loyalists like Manuel Vicente. João Lourenço then came to power as the new head of the MPLA. In both instances, defying the odds, the loyalists ousted the embedded ruler to preserve their own access to power and rents.

Princeton scholar Milan Svolik has built an elegant game-theory model to show why some rulers stay in office for decades, while others last only a few months. He argues that the focus in the academic literature on the role of popular opposition in overthrowing authoritarian rule may be misplaced, as it fails to account for the majority of autocrat removals from office.

In the model, autocrats have two options at any given moment. First, they can comply, which is to maintain the status quo – a delicate power-sharing arrangement within the ruling party. They refrain from grabbing power for themselves. Second, they can divert, accumulating more power at the expense of the power held by other members of the ruling coalition. In response, other members either launch a coup or accept the power grab.

‘Successful’ autocrats divert regularly and often in the early years of their rule, co-opting potential threats to their aspirations through incentivising loyalty, thereby minimising the probability of a coup being launched by remaining insiders.

‘Successful’ autocrats divert regularly and often in the early years of their rule, co-opting potential threats to their aspirations through incentivising loyalty, thereby minimising the probability of a coup being launched by remaining insiders.

Both dos Santos and Mugabe did this effectively, using a combination of violence and co-optation, cementing power by incentivising loyalty through patronage. Rent distribution was calculated to maintain sufficient regime support from those who mattered. Threats were minimised through ‘musical chairs’ – shifting plumb positions regularly enough to avoid new seats of power from arising. The effects have been devastating for the citizens of Angola and Zimbabwe respectively.

In the latter, the military takeover essentially continued the regime of Mugabe loyalists at the expense of the G-40 faction. How long will Mnangagwa last as chief crocodile of the Lacoste faction? It seems unlikely that he will be ousted in the near future by his own party or the army, despite extensive rumours that he is not in charge. Mnangagwa’s capacity for ruthless violence is not in dispute. He was integrally involved in the Gukurahandi of the early 1980s and has orchestrated repeated election violence. He has also likely masterminded the strategy of dividing the opposition, leaving the Movement for Democratic Change in tatters after a brief spell of governmental participation from 2008 to 2013.

Mnangagwa appointed the late Perence Shiri (who died on 28 July 2020) and Constantino Chiwenga – army generals who were instrumental in ousting Mugabe – to his cabinet. While many Zimbabweans believe that Chiwenga is the real power behind the throne, manipulating Mnangagwa to ensure that the military stay fat, that doesn’t suggest that a credible coup attempt is nigh. However, Mnangagwa has not made any diversionary moves to eliminate internal opposition to his aspirations except perhaps for retiring four senior generals with links to Chiwenga while the latter was in India receiving treatment for an undisclosed illness.

What will the demonstrations on 31 July achieve? It remains hard to tell. Nonetheless, it’s extremely important that they go ahead and that the world stands in unity with the citizens of Zimbabwe. They are calling for an end to the predatory, rapacious and brutal military regime that has thrown their country into despair and misery. Every global citizen should support them. 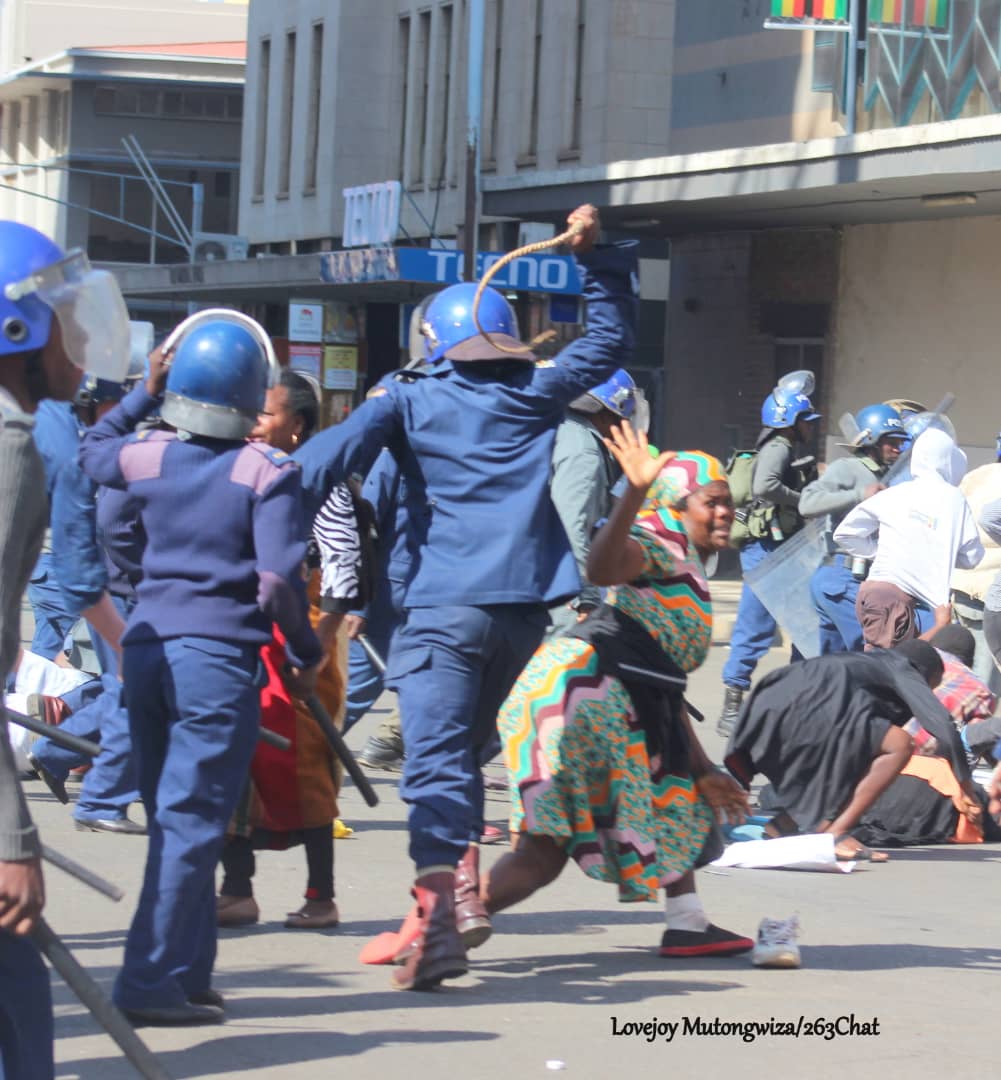 Dr Ross Harvey is the director of research and programmes at Good Governance Africa, and a senior research associate at the Institute for the Future of Knowledge at the University of Johannesburg.

Professor Chris Alden teaches at the London School of Economics and Political Science (LSE) and co-director of the Global South Unit at LSE IDEAS, as well as serving as a senior research associate, South African Institute of International Affairs (SAIIA).