Professor Milan Vojnovic is a Chair in Data Science in the Department of Statistics, London School and Economics & Political Science.  With the publication of Contest Theory, we took the opportunity to interview the author to find out more about his book and how it relates to his career.

What piqued your interest in the topic of contest theory?

I got really interested in this topic around the time when crowdsourcing services started to gain a wider popularity in the internet online services. For instance, online labour platforms that use rank-based compensation schemes such as TopCoder; a popular online platform for competition-based software development. I was driven by intellectual curiosity to try to understand how online workers choose which projects to work on and how much effort to invest in their chosen projects. This decision-making is based on available information such as how one’s skills match different project requirements and stand in comparison with other online workers. I appreciated that game theory would provide me with a good framework to model rational user behavior using a set of first principles and to study the properties of outcomes in strategic equilibrium. I was also driven by a need for a unified treatment of various statistical methods for inference of individual skills based on observed contest outcomes.

What kind of readers would benefit from Contest Theory and what is the key message you hope readers will take away?

I think that the book is unique in providing a comprehensive coverage of contest theory developed in the areas of economics, computer science and statistics. This includes different kinds of strategic games that model contests and their equilibrium outcomes, statistical models of contest outcomes, and methods for inference of individual skills. The kind of readers who would benefit from the book include those who are interested in learning underlying mathematical foundations, for example in order to pursue further research in the area, and those who are more interested to learn various models of contests to apply them on data. I hope that readers would appreciate that contest theory contains rather elegant and insightful theory, which offers plenty of hypotheses about user behavior waiting to be tested on data.

What application scenarios can be studied using contest theory?

There are numerous traditional application scenarios that have been studied in economic literature, such as rent-seeking and promotion tournaments in firms. A classic example of a rent-seeking activity is political lobbying where companies use their capital to contribute to politicians who influence the laws and regulations that govern industry and how government subsidies are distributed within the industry. For example, presidential campaign donations, like in the recent US presidential election, may well have an underlying rent-seeking objective. In firms, rank-based compensation schemes have been widely used in different industries. These schemes sometimes create incentives that are misaligned with a firm’s objective; for example, for a number of years Microsoft used a stack ranking system for employee performance review, but eventually abandoned it to promote the teamwork culture and focus on the customers.

There are also numerous application scenarios in the context of various resource allocation problems and internet online services. For example, contest theory has been used to study allocation of computer and communication network resources, such as processor duty cycles, storage, and network bandwidth. It has also been widely used in the context of internet online services, such as online labour platforms and online Q&A services, which incentivise user contributions by monetary rewards or some sort of credits based on relative individual performance.

Can you touch on how your experiences working at Microsoft Research helped to shape the contents of this book?

It helped me to develop an appreciation of formulating and studying mathematical models that are motivated by real-world applications and trying to derive practical implications from theoretical results. It gave me an opportunity to work on several projects related to the topic of the book, in collaboration with some truly brilliant colleagues and students. For example, one of the projects resulted in one of the first models of crowdsourcing services as a system of simultaneous all-pay auctions. I have also been inspired by some prominent work of my colleagues on the design of skill rating systems for online gaming systems.

How does your current position of professor in data science relate to the topic of the book?
Data science is an interdisciplinary field that includes a wide range of scientific methods for learning from data. Contest theory can be seen as a subset of these scientific methods, including game theory as a mathematical framework to reason about strategic data sources and statistical models and methods for ranking data. I am in the fortunate situation of being affiliated with an institution for which understanding user behavior and “To Know the Causes of Things” is very much at the centre of their focus.

To find out more about Contest Theory, visit http://bit.ly/contesttheory. 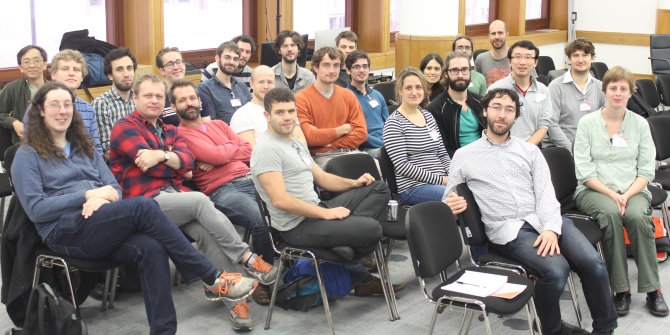