Last Friday, the MEC, in collaboration with Future Shorts, screened nine short films from (and about) the Middle East with differing narrative structures, cultural codes and ideologies. The screening, part of the Centre’s conversation21 art festival (generously funded by the LSE Annual Fund), offered a cinematic journey and shed light on a cultural imaginary that was produced in, or inspired by, Egypt, Palestine, Israel, Kabul and Iran. The films were produced between 2000 and 2012, and they belong to different genres (documentaries; music video; animated shorts and short drama) with a length that ranged from two to 14 minutes.

The screening started with Collision, a two-minute animated short by Max Hattler (2005) – an ingenious visual spectacle in which the artist constructs and deconstructs, morphs and reproduces abstract patterns of American and Islamic connotations. The six shorts which followed combined a few witty scripts, some beautiful cinematography and narratives with underlying socio-political subtext. The show also included two music videos that became a subject of debate during the discussion afterwards. In fact, at least in the past three decades, music video clips have formed a significant part of short films production. Today, they continue to occupy a unique role in popular imagination.

In this context, Bad Girls, recording artist M.I.A’s 2010 music video, was presented as an example of a highly popular short in the Middle East and beyond. However, it is worth mentioning that there is a risk when representation is used (or misused) to emphasize an alternative (yet equally distorted) depiction of Middle Eastern women. M.I.A.’s intentions to support Saudi Women’s driving rights in Bad Girls are certainly plausible; the problem is how were these intentions visualized and produced in the film? The other more important question is: What if this superfluous new interpretation incidentally replaced the old stereotype with a new, and even more bizarre or anecdotal, one? On another note, some of the short films that were screened are truly remarkable: Café Regular’s dialogue, Tolya’s heartbreaking and poignant story, and Babak Anvari’s account of dictatorships in Two & Two.

Café Regular (2012) by Ritesh Batra captivated the audience with its clever script. Two protagonists, Alaa and Mai, encounter a crisis in their relationship. Their conversation unfolds to reveal the absurd reality that many young Egyptian couples face today. May’s unexpected suggestion, to have sexual intercourse before marriage, discloses the taboos and contradictions as she deals with perceptions of her own body and sexuality on the one hand, and her religious inherited beliefs, on the other. The conversation also cleverly and subtly evokes some of the socio-cultural problems related to the impact of housing unaffordability in Egypt, marital break-up and separation anxiety. Yet one thing is puzzling: In post-revolution Egypt, Cairo’s café is almost empty! This is a film that challenges the stereotype and raises more questions than answers.

Tolya (2008) by Radeon Brodsky is a genuine tale of love, intimacy, longing and belonging. Documenting the daily story of a migrant worker from Belarus, Tolya’s cinematic approach and filmic narrative also depicts the delicate nature of human beings, their economic hardship as well as their resilience and struggle for survival. The events take place nearby the labor camps in Israel. On Women’s Day, the absence of women is made visible through the conversations amongst workers and their answers to the filmmaker’s question. Tolya’s subsequent attempts to call his wife and wish her a happy Women’s Day fail because his tooth loss prevents him from speaking loud and communicating his affections to her. Throughout this documentary, the audience is invited to reconstruct the imaginative landscape of Tolya’s hometown through his sensorial explanation of his house, his unspoken desire for his wife, and his memories of his old neighborhood. At the end, the audience is invited to witness a heartbreaking depiction of Tolya’s intimate yet muffled phone-conversation with his wife as he starts to playfully meow with a familiar sound to make her laugh.

The night ended with Two & Two (2010) – an intense nine-minute film by Babak Anvari in which the director makes reference to societies governed by authoritarian regimes and the systematic construction of a subjectivity that is passive and docile. Through its framing, color tones and the control of light, Anvari successfully evokes sites of control and surveillance. Adopting a child’s point of view, the filmmaker privileges a camera perspective of ‘looking-up’ to construct his filmic narrative – emphasizing teen’s confrontation with authority and ‘the Other’; the school becomes a site for authority in a setting that looks more like a prison than a classroom; the subjects are filmed in a gloomy sterile and controlled space. The high window barely allows for light infiltration and everything is well ordered and measured. Their depiction and selection strikes: the strict teacher wears a black outfit while the pupils are all uniformly dressed in pressed white shirts reflecting the obedient attitude of repressed politicized bodies. Students attempt to resist as the teacher argues that two and two equal five. The discussion intensifies. The tone of the teacher’s voice rises until the scenario takes a disturbing dramatic turn; when one student speaks out the truth, he is shot dead by his elder peers. The film provides an allegory to the resilience of younger generations against repression and their distrust and disbelief towards the complicity of the older generation.

The nine film directors adopted a multiplicity of narrative forms and contents as shaped by subject selection, composition and framing, use of color and control of light. But beyond narrative form and cinematic techniques, I wish to suggest an alternative framework to examine these visual narratives based on four aspects:

1.     The construction of subjectivities and the use of cinematic bodies

The films exposed a number of bodily representations from the excesses of dancing bodies in the two music videos: The Chemical Brothers’ Do it Again and M.I.A’s Bad Girls, to the rigid politicized figures of Anvari’s subjects. Two & Two renders the production of a collective identity in response to political repression and the creation of a social identity characterized by non-participation and passivity. Other films in the screening primarily examined youth, their subcultures, their values and conflict with the adult world such as Skateistan – To Live and Skate Kabul (2010) by Orlando von Einsiedel. The struggle of marginalized social groups is also felt through the characters of two workers in Israel: The first is Tolya from the above-mentioned film by Brodsky, and the second is Marciano’s new Romanian worker, Ceaucescu, from Sigalit Liphshitz’s film, Cock Fight in 2000. The female body was also present in the screened films. May’s nonconformist viewpoints in Café Regular skillfully deconstruct the clichéd representation of middle-eastern Muslim women. While in Bad Girls the stereotype of Saudi Women is excessively inflated and exaggerated to a melodramatic level, Sarah’s activism in Paint the Way is perhaps a little more inquisitive; accompanied by the ghostly presence of her male friend, she ambiguously shifts her being between a cautious flaneuse and a self-restrained street artist.

The films highlight the complex relationship between cinema and the urban environment; and raise questions on constructed and imagined spaces as well as spatial exclusion and the spatial politics of neglect and separation. There is a dual sense of utopia/dystopia when in Paint the Way Sarah Abdalli drifts between the imagined past and the degraded environmental realities of her childhood Sham District in Jeddah. Skateistan’s stunning picture and beautiful cinematography highlights a contrast between the unfriendly militarized cityscapes of post-war Kabul and the stunning natural landscape and heritage sites that surround it. In other instances, the city and its peripheral boundaries outline sites of social exclusion (Tolya) or spheres of control, cultural encounters and social conflict. This is clear in Cock Fight, where the checkpoint becomes the site for an imagined reversal of political roles between Palestinians and Israelis, but also as a site for negotiation and competition over power

This one becomes critical when a film examines an important historical moment. Here, the role that short films play, and how they respond to social and political shifts in transitional periods of history, is emphasized. For example, the calm peripheral setting in Café Regular was filmed in 2012. Now, this is interesting: is it meant to deny the intense transitional moment of post-revolutionary Egypt? Or was it a form of ‘passing time’ in a nation ‘on hold’? Similarly in Orlando von Einsiedel’s film, Skateistan, the heavy presence of the troubled past in post-war Afghanistan continues to be implied and made visible in Kabul’s everyday life.

4.     Cinematic adaptations to the existing socio-cultural and political context

If we are to examine these films then it is imperative that we look at the context of their narrative and its association with social institutions, political order and cultural relevance. This places us in the face of a set of (often prescribed) social values, political regulations and cultural expectations. For example, the problematic reality of youth education and socialization is a cinematic subject of interest here. Two & Two exposes the actuality of teaching and schooling under authoritarian regimes in which primary schools, as social institutions, become a means for mediating power and policing boundaries. On the other hand, both Do it again and Skateistan, refer to youth estrangement, child labour, the problematic integration of teens within a society in which they do not always fit and the conflict that results from their roles as adults, preventing them or depriving them of their childhood. This alienation may manifest itself through practices of escapade; delinquency and misbehavior. Or, as shown in Skateistan, it can become an opportunity for the production of new spaces of integration such as skateboarding sites in Kabul

To this end, I recap on two phrases from the last film shown in the screening: As the teacher in Two & Two becomes enraged by the ‘insolence’ of his student, he shouts: “How dare you question me?”… “Think? You do NOT think!” These words resonate and haunt. No other script from Future Shorts could be more relevant to what we are witnessing today in many parts of the Middle East.

Dr Nadia Mounajjed joined the MEC as a Visiting Fellow in November 2012. Between 2007 and 2012, she worked as Assistant Professor of Architecture and Design at the American University of Sharjah, while serving as the research advisor to the Sharjah Art Foundation. Her research interest lies in body theory, the politics of space, visual culture in the Middle East and the Gulf region, with a special focus on Syria and the UAE. Her current research also involves a mapping of the visual production and spaces of resistance in today’s Syria. 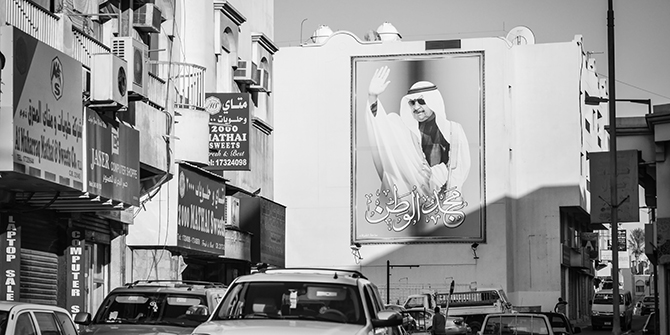