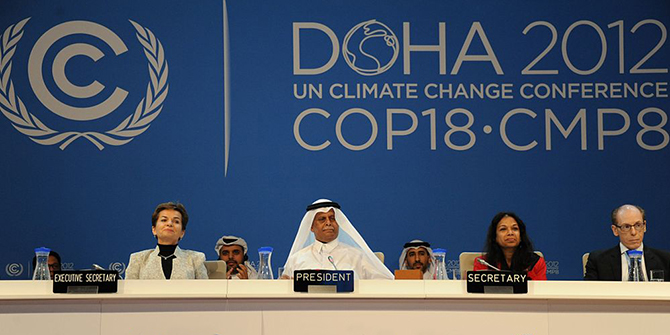 Last year’s  Paris Agreement marked the first time all 190 UNFCCC members committed to keeping the average global temperature rise from pre-industrial times well below 2 degree Celcius. While a collective action is needed to turn this vision into reality, the responsibilities of each country will differ depending on their national circumstances. The economic reality of the GCC states – being blessed with oil and gas reserves – suggests controversy in terms of the region’s role towards climate change.

Climate action in the GCC stems from the tangible impacts of climate change in the region, such as increasing average temperatures, less precipitation, rise in seal levels, droughts, water scarcity and food security. Pal and Eltahir suggest that, by 2070, the region could suffer heatwaves beyond the limit of human survival, which may pose a deadly threat to millions, especially Hajj pilgrims during summer. The region’s high per capita carbon emissions, with Qatar ranked 1st and Oman 13th in the world in 2013 (see Figure 1) attract global attention towards the region’s role in global greenhouse gas emission reduction. In recognition of the above, all GCC countries have ratified the Kyoto Protocol and submitted Intended National Determined Contributions (INDC) reports ahead to the Conference of Parties (COP21) in Paris in December 2015. Yet, climate change consideration in the GCC still seems to be perceived as secondary to pressing national concerns related to food security, energy and water security and basic infrastructure needs. 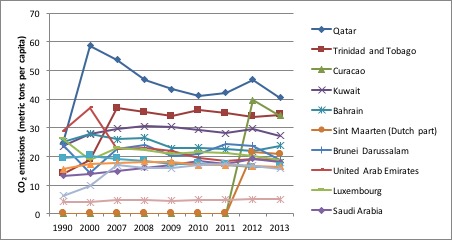 Fiscal pressures, for instance, created by the decline in oil prices since mid-2014 have forced most GCC governments to reconsider their economic structures, pushing economic diversification. Key examples include Saudi’s Vision 2030 and Oman’s Tanfeedh programme. Looking at the GCC states’ economic reform plans, it is important to question whether enough attention was given to incorporate climate change responses. Climate change responses can provide value-added to economic diversification and vice versa. The energy and water sectors, for instance, can present entry points for policy incorporation. The development of clean energy, energy efficiency, water desalination using clean technology and water recycling are essential for meeting the increasing demand of energy and water in the GCC. At the same time, these developments generate positive economy-wide returns including reduced dependence on fossil fuels, improved energy security, the creation of new industries and the generation of green jobs.

Notably, different aspects of climate action are being slowly incorporated into development planning in the GCC. Depending on the diverging national circumstances, all plans include mention of of ‘sustainability’ or ‘green growth’. For example, Saudi’s Vision 2030 aims to increase the role of private sector and government funds to achieve environmental sustainability in waste management, recycling projects, natural reserves and water resource management. On the other hand, Oman’s Tanfeedh programme, which targets manufacturing, tourism, transport and logistics, mining and fisheries to increase their contribution in the country’s GDP, has no explicit mention of climate change but includes three national goals: environmental protection, crisis risk management and science, technology and innovation, which can be the main gateways for climate policy incorporation. In the UAE, consistency between the UAE INDC structure and the national development plan (Vision 2021) can be recognised especially with the establishment of the ‘Green Growth Strategy’, ‘National Innovation Strategy’, and ‘Dubai Integrated Energy Strategy 2030’. Additionally, climate action has already been incorporated into the UAE’s education sector, most notably with the establishement of the Masdar institute for sustainable energy research, the Dubai Centre of Excellence for Innovation Energy and Water Solutions and the Solar Innovation Centre, and the Zayed Future Energy Prize.

Early recognition of the importance of climate incorporation into the GCC states’ long-term planning can reduce the risk of inefficient budget allocation, minimise the risk of additional burden or overlapping and conflicting strategies. It can also enhance coordination across different ministries, improve communication with other stakeholders, and increase public awareness of climate change. In many cases there no ultimate win–win situation, but trade-offs between certain aspects of development and addressing climate change deserve a closer look.

Aisha Al-Sarihi is Research Officer at the LSE Middle East Centre, currently working on Climate Change in the GCC. She is also completing her doctoral thesis at the Centre for Environmental Policy, Imperial College London. Her areas of research interest include low-carbon energy transitions in the Middle East and North Africa, renewable energy policies, and climate change policies in the GCC. She tweets at @aisha_sarihi.

Bad Behavior has blocked 352 access attempts in the last 7 days.