Caroleen Marji Sayej’s meticulously chronicled study examines Ali al-Sistani’s immense influence upon Iraqi politics, all the more potent against the backdrop of the fractured state that emerged after the 2003 American invasion. Well-researched and persuasively argued, Sayej’s book avoids the pitfalls of much literature on the topic, which often misunderstands the place of religion in Arab societies and downplays the power of the clergy. 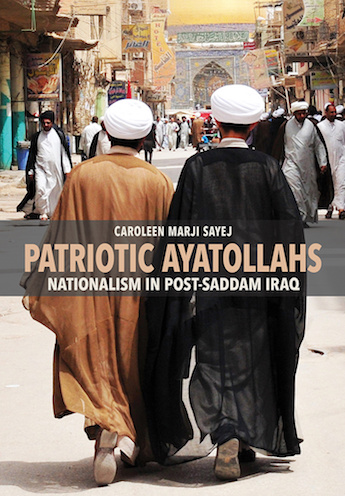 Faced with the perennial question of how democracy or something resembling it could ever come to the Middle East, few would argue for getting clerics more involved in running the state. Indeed, there is ample history showing how political Islam has posed significant challenges to republican rule. And yet it is Iraq’s most senior religious figure who has defied conventional wisdom multiple times and effectively ended political stalemates to promote nationalism, not factionalism.

In a country of car bombs, a resurgence of ISIS violence, warring sectarianism among Shi’a and Sunni communities, and profound corruption among politicians and tribes, national unity would seem an elusive objective. According to CIA statistics, Iraq’s population is 75–85 percent Arab and 15–20 percent Kurdish, with about 5 percent of the country belonging to various other ethnic groups, including Turkmen, Yazidis, Bedouin, Assyrians and Persians.

Many Iraqi leaders’ ultimate goal is to revive Iraqi nationalism, particularly after deep sectarian conflict tore the country apart for many years after the 2003 American invasion. One reason sectarianism became widespread in Iraq is that expressions of Shi’a identity and culture were suppressed under the Sunni-led rule of Saddam Hussein. This repression created deep sectarian divisions in Iraqi society. When the country faced a predominately Shi’a opponent in the 1980–8 Iran–Iraq War, sectarian polarisation increased. Another reason for sectarianism, which is true of the Arab world in general, is that the main alternatives to secularism and nationalism have largely been urban phenomena appealing to a small group of educated elites. In Iraq as in other countries, there was little incentive for the underclass to rally around a flag that only symbolised their suffering under repressive dictatorial elites.

In the Arab world the issue of identity is often contested and nationalism seems like a relic from the early 1960s, when the advent of the miniskirt was a more popular topic of discussion in Arab societies than religion or religious identities. Egyptian leader Gamal Abdul Nasser’s notion of nationalism rested on an imagined Arab unity – a notion whose failure was reflected by Iraq’s refusal to join the short-lived United Arab Republic formed by Egypt and Syria in 1958. After Israel’s decisive victory against Egypt, Jordan, and Syria in the 1967 war, Arabs were humiliated that their collective armies had proved no match against their bitter foe. Despite Nasser’s dream, the nationalistic ideas of old collapsed.

Since 2003, perhaps by necessity in the face of the weak, fractured Iraqi state, the marjayyia (the collective clerical leadership) led by Ali al-Sistani have put themselves forward as power brokers and even outright political players. In her book Patriotic Ayatollahs: Nationalism in Post-Saddam Iraq, Caroleen Marji Sayej meticulously chronicles Sistani’s influence in the country and his steady transformation from an unseasoned politician to a figure with a deep understanding of institutions. Sayej makes her case throughout this well-researched book by citing many of Sistani’s rulings and actions over the last fifteen years. Only months after the US invasion, Sistani challenged Paul Bremer, who led US reconstruction efforts and was pushing for the immediate drafting of a new constitution. Sayej explains that with the backing of three other ayatollahs in Najaf who supported his fatwas, Sistani demanded instead quick elections so that the political process would be deemed legitimate in the eyes of ordinary Iraqis. At times he prevented sectarian violence, and he inspired a vote of no confidence in a sitting prime minister, whom he saw to be inflaming sectarian passions. While foreign interlocutors and Iraqi politicians behaved in authoritarian ways, Sistani and his colleagues have taken the moral high ground by reaching compromises and trying to curb partisan forces, such as Iranian-backed political parties and militias, from having their way at the expense of the Iraqi people.

Sistani and his allies have insisted that multiple identities in Iraq can coexist, and that they must do so in order to create a stable and unified nation. The Iraqi hawza, a collective term for the seminaries and religious scholars, has newly engaged with politics since 2003. ‘It was focused on state building,’ Sayej writes. ‘Without the ayatollahs’ interventions “democratic” measures that required widespread Iraqi participation might not have developed, at least not so quickly.’ A similar shift in the clerical establishment’s role can be seen in other Arab societies. After decades of being pushed aside or reduced to little more than a rubber stamp for ‘secular’ autocratic leaders, institutionalised religion among both Sunni and Shi’a has, especially since the Arab Spring uprisings of 2011, has taken a more independent stance in politics and religious interpretation and guidance.

Sayej, however, is careful to note that ultimately Sistani and his colleagues adopted a discourse on democracy that reflects neither that of the West nor Iraq’s powerful neighbour to the east, Iran. ‘In the end, it was not the US “liberators” but the ayatollahs who were the guardians of democracy in Iraq after 2003,’ she writes.

Sayej stands courageously apart from many authors writing on the subject. Much of the literature about religious authority in the Middle East misunderstands the place of religion in Arab societies and downplays the power of the clergy. Sayej rightly considers Islam on its own merits, rather than simply discounting it as an instrument religious figures and laymen use to advance a political agenda, as do American and Arab academics who spend little time doing research in the field.

Part of Sistani’s genius is his ability to judge public opinion. Whether he is voicing his preference for a prime minister or issuing a directive to fight ISIS, somehow he remains in sync with Iraqis’ feelings. Sistani’s effort to distance the clergy from Iran has corresponded to changing opinions: between 2015 and 2018, the percentage of Iraqi Shi’a who had favourable attitudes toward Iran decreased from 88 percent to 47 percent; during the same period, unfavourable attitudes toward Iran increased from 6 percent to 47 percent. The Iraqis I spoke with last summer said they worried that Iran was hijacking Iraq in order to mould the new government, which was appointed last year, to its liking.

If nationalism stands a chance in Iraq, allegiance to tribe and religious sect must give way to loyalty to the state. But the development of nationalism does not necessarily depend upon a secular state in which religion and religious authority have little power. While religious figures and ideologues in the twentieth century often proclaimed that secularism and nationalism had no place within Islamism, mainstream Islamists opposed to radical jihadists have suggested otherwise.

If the twentieth century is a guide, history is not on Sistani’s side in his quest for national unity. But today’s Iraq is unlike the Iraq of old. The last fifteen years have taught Iraqis a painful lesson. The defeat of ISIS in Mosul in December 2017 unified the country to some degree, even though ISIS is reconstituting itself again in other parts of the country. In his late eighties, Sistani may soon have to rely on the groundwork he has prepared to continue his mission to unify the country. The question is whether, without him, Iraqis can defy their own history.

Geneive Abdo, a visiting fellow at the Arab Gulf States Institute in Washington, is the author of several books on the Middle East, including The New Sectarianism: The Arab Uprisings and the Rebirth of the Shia-Sunni Divide (Oxford University Press, 2016). She tweets at @AbdoGeneive