We can’t breathe. Pollution fills our lungs, and as easily as it seeps its ways through our bodies, it seems to find a way to seep into our government. A cloud of black smog fills Lebanon’s skies, and though literal pollution engulfs this tiny country, there is also a conceptual pollution threatening to destroy our very homes.

No clean air. High bread prices. Even higher oil prices. Unjustifiable tax increases. Inflation. Currency drops. Water shortages. Lack of electricity. Refugee crises. Garbage everywhere. Cancer that oozes through those garbage bags, into our air, into our bodies, into our government, into our futures. This is only a fraction of it.

On Sunday 20 October, tens of thousands people were reported to have gathered in Martyr’s Square in Beirut, chanting and protesting against the corrupt government for the fourth consecutive day. In London, 3,000 people stood in Notting Hill repeating the same chants. In Paris, 4,000 people reiterated those slogans at the Trocadero. In New York, LA, Milan, Australia, Stockholm… The Lebanese diaspora gathered—all in different places, yet with only one place in mind.

At the London protest, young Lebanese émigrés passionately waved posters that read ‘We left because of you,’ directed at the Lebanese cabinet. Like them, as a 24-year-old trying to build a future, I left Lebanon to work in the UK. Though I am happy to have this experience, it saddens me that before this revolution, I harboured no hopes of returning home anytime soon.

Often, young expats are asked if they would consider going back to Lebanon. They almost all respond, ‘I will go back to raise my children eventually.’ However, in spending our money in foreign economies instead of contributing to our own, putting our education and hard work into foreign universities and corporations, what are we leaving in Lebanon for these future children of ours? A vicious cycle has sneakily crept upon us—Leave because the country is not good enough, go make something of yourself and come back when you do. But come back to what? There is nobody here anymore to water our cedars and make them grow.

The Lebanese government has alienated its youth and because of this, Lebanon has suffered so many lost opportunities. Today, expat spending in foreign countries on apartments, food, shopping, and foreign taxes is all money that could be contributed to our own GDP, our own infrastructures, our own social security. Instead, the Lebanese diaspora is estimated to number 14 million people, many having left due to the unsatisfactory living conditions within the country. Furthermore, expat money reserves are dwindling with the uncertainty of the exchange rate peg.

Nevertheless, though during the past week hopes have been raised, there is also an acrid skepticism in the air. For as long as we can remember, Lebanon has been ruled under a system that enforces the sectarian divide, trying to balance 18 religions in its government. For the first time, people have decided to toss religious biases aside and unite in fighting a secular battle, with the common goal of creating a country with a future of which we can all be proud, no matter which confession we belong to.

However, the reason that this revolution is different does not lie in the fact that people have decided to discard their religious parties, a long overdue development. Instead, its success comes from the awakened youth who have spearheaded it. In this revolution, it seems every young Lebanese person has become an activist. During the past week, each have been playing their part at Martyr’s Square: waving their flags, wearing their masks, picking trash off the streets, writing songs, or planning demonstrations around the world to raise awareness. Every Lebanese youth has taken on as their civic duty the task of raising awareness and preparing for the fight— this is the key to Lebanon’s future, as we are the future. We left because of you, but hopefully we will be back because of us.

Laetitia Kurban is an Account Manager at the Financial Times in London. She tweets @LaetitiaKurban 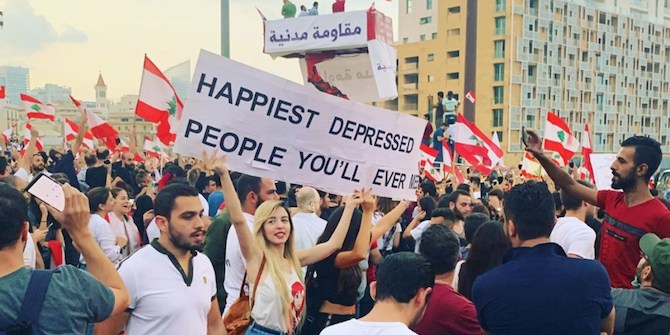 Bad Behavior has blocked 2277 access attempts in the last 7 days.