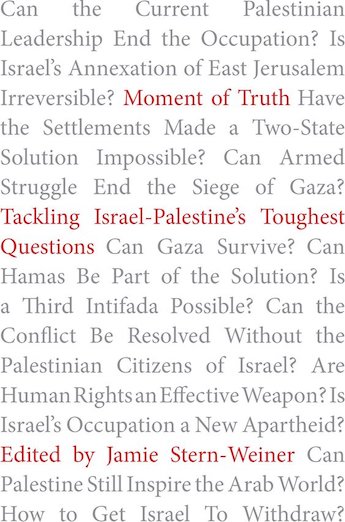 What more could be written about the Israeli–Palestinian conflict that has lasted over a century with no solution in sight? The Oslo process ended a long time ago, settlements continue to develop and the prospects for a two-state solution do not seem realistic. Jamie Stern-Weiner’s Moment of Truth comes around 50 years after the 1967 war. In the collected volume’s ‘Chronology’ section, the last event mentioned took place in June 2016, when the UN adopted Resolution 2334, which ratified the two-state solution and the illegitimacy of the Israeli settlements in the West Bank. However, since then, major developments have taken place, notably President Trump administration’s recent decision to declare that Israeli settlements do not violate international law.

Despite these latest developments on the ground, the editor’s collection of articles is fascinating, especially because of its unique structure. The collection includes three broad topics, divided into sub-topics, each with one or two leading contributors who express opposing positions, with several other positions presented. There exists a kind of back-and-forth between contributors, each referring to the writing of the other, enticing the reader to continue reading.

For example, in Chapter Three, entitled ‘Did the settlements cause the two-state solution to be impossible?’, Shaul Arieli and Gideon Levy tackle the issue of the applicability of the two-state solution. The chapter is arranged as an exchange of letters between the two, where one answers and criticises the other, creating an intellectual conversation. Gideon Levi concludes: ‘I would love to endorse Shaul Arieli’s plan [for a two-state solution]. I wish it were possible. I believe it is no longer possible’ (p. 66).

Another chapter asks, ‘Is Israel’s annexation of East Jerusalem irreversible?’. Two contributors debated the possibility of returning to pre-1967 borders. Daniel Seidemann argues that if the political reality was different, Jerusalem could be segregated, while Yoaz Hendel claims this is impossible. Three contributors then criticise the narrowness of the discussion: First, Rami Nassralla argues that the ‘Israeli discourse is still characterized by a complete denial of Palestinian national and political rights’ (p.39); second, Lior Lehrs adds that the ‘Hendel–Seidmann exchange focuses on whether it remains possible to physically divide Jerusalem…[instead of] “recogniz[ing] and address[ing] the new “facts on the ground”’ (p. 47); and finally, Michael Dumper argues that their exchanges ‘do not give the full picture…[and that] while the reversibility of the annexation in 1967 is certainly debatable, the resolution of the debate is not the end of the story’ (p.45).

It seems that the Hendel–Seidemann exchange, as well as a significant portion of the entire collection, focus on the ‘1967 question’, i.e. the two-state solution, while paying little attention to the ramifications of the 1947–8 war (the independence war for Israelis and the Catastrophe (Nakba) for Palestinians), or even earlier stages such as the 1929 riots or the beginning of the Zionist settlement in Eretz–Israel/Palestine.

The 1947–8 issue comes to mind when reading Norman Finkelstein’s interesting chapter entitled ‘How to get Israel to withdraw: Lessons from President Jimmy Carter’s Middle East Diplomacy’. Finkelstein analyses two volumes from the Foreign Relations of the United State series arguing that during the Camp David summit in 1978, President Carter acted in accordance with US national interests and not international law interests. Therefore, Carter pressed Israel to completely withdraw from the Sinai Peninsula and encouraged Anwar Sadat to accept a separate peace with Israel, while abandoning Sadat’s quest for a comprehensive agreement that would also address the Palestinian issue (p. 433). This analysis is conducted by Finkelstein to argue that substantial American pressure will cause Israel to withdraw from Palestinian territories, however such pressure will be exerted only if it aligns with American national interest.

Finkelstein’s work is another example of how the 1967 territories stand at the heart of this collection. What is lacking is a broader view of the conflict. The issue of the 1947-8 war was absent from the Camp David 2000 summit between Israelis and Palestinians, as former Israeli Prime Minister Ehud Barak said: ‘I came to solve the 1967 question and Arafat came to solve the 1947 question.’ And as is written in the collection’s introduction: ‘This volume’s focus on the Israeli occupation that began in 1967 reflects its editor’s belief that an end to the occupation would represent an important milestone in the Palestinians’ quest for freedom’ (p.1). In this context, the editor wrote that one of the points that are not covered in the book is the refugee issue, which, despite its importance ‘there does not at this point appear to be much new to say about’ (footnote 2).

Therefore, the editor’s choice to focus on the question of the occupation and 1967 is in line with the choice to ignore the issue of Palestinian refugees, which certainly acceptable and legitimate. However, it significantly hinders the development of a comprehensive view of the conflict and suggestions for its resolution. This is especially true after all the failed attempts over the past 25 years to resolve the 1967 issue. Perhaps it can be concluded that what is lacking in negotiations and discussions on resolving the conflict are issues related to 1948, refugees, and in other words, questions related to narratives and collective identity. As said elsewhere by a Palestinian negotiator, Hussein Agha:

Despite this deprivation, Stern-Weiner’s collection enriches the readers’ understanding of the Israeli–Palestinian conflict and its possible solutions, both by its diverse angles and its unique structure as an exchange between opposing viewpoints.

Yoav Kapshuk is Lecturer at Kinneret College on the Sea of Galilee, Israel. He was Visiting Fellow at the LSE Middle East Centre in the Summers of 2018 and 2019. His current research deals with changes in world order and their ramification on the Middle East. 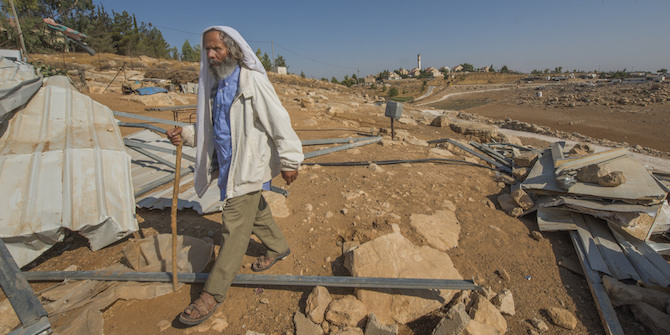 Bad Behavior has blocked 2447 access attempts in the last 7 days.