The dust has settled for the time being in the US-Iran duel. Retreating from the conflict, President Trump tweeted ‘all is well’ in response to Iran’s retaliatory strikes on US air bases in Iraq. Shortly after, Trump went back to his ‘go-to’ deterrent of choice – sanctions. Faced with the possibility of a full-scale war with Iran, Trump chose to de-escalate, however, he announced that he would impose additional sanctions on Iran – a move of limited impact given the multiple, strict sanctions already in place.

General Hajj Qassem Soleimani was seen as the main pillar of the regional resistance bulwark, having merged Shi’a ideology, anti-imperialist political thought, and nationalist sentiment with geostrategic and military acumen. In life, he was revered by many Iranians as a brave defender of the nation, and a mastermind of asymmetrical warfare – the cornerstone of Iran’s security doctrine. Polls taken during the fight against the so-called Islamic State found that 73 percent of Iranians had a favourable opinion of the general. In death, Soleimani has become an even more colossal figure, elevated to the status of ‘martyr’: shahid. The question is: why did this man’s passing have such an impact on Iranians?

On that fateful night, just three days into 2020, the Iranian general was allegedly on his way to deliver Iran’s response to an Iraqi-brokered initiative to reduce tensions with Saudi Arabia. As these details slowly emerged in the news cycle, Trump’s move was decried as deplorable and cowardly – not just an assassination but a humiliating slaying. This was not a covert operation, an accident or collateral damage. Soleimani did not perish on a battlefield, he was killed unceremoniously at a distance, in a drone strike in an airport in a third (and sovereign) country having disembarked from a commercial flight.

Clearly, Soleimani was no fugitive.  He was no Abu Bakr al-Baghdadi or Osama Bin Laden. Nor was he even necessarily an enemy combatant, as the CIA considered Imad Mughniyeh. Soleimani had actually fought alongside the US for several years, having been instrumental in dismantling the ISIS caliphate. CNN acknowledged that while the US and local allies fought ISIS in Syria, as well as in Iraq, Iranian-backed militias had also pushed the terror group back in Iraq. Soleimani was reported to have often led that fight from the front line. This is why his assassination sent such seismic shock waves throughout the Shi’a world.

The outpouring of grief and the rage were a curious mix of emotions that reverberated not only throughout Iran and Iraq, but all the way to Toronto. A Canadian Islamic organisation called Mahdi Youth Society (MY Society) promoted a vigil in Toronto for the slain ‘heroes of Islam’. Transversal in nature, this particular blend of emotions had to be ‘managed’ with both tact and solidarity. Not only did Tehran carry the weight of the Iranian people’s demands for retribution on its shoulders, it had to somehow honour the legacy of now-Shahid Soleimani, all the while keeping Iran out of an unwanted war. What was clear was that the Iranian government had to react – it had to appease the grief-stricken masses, and to ensure that it would not precipitate war.

And it did so, through ‘Operation Shahid Soleimani’: Iran’s 9/11 moment, with Iran seeking justice for what it saw as an act of terror, or an act of war that took place without the declaration of war. Vowing to retaliate, Tehran launched a barrage of missiles on two American air bases in Iraq. This was not the approach that the late general would have taken. Iran has always hovered in the haze of ‘plausible deniability’, where officials were able to deny knowledge of, or responsibility for any damnable actions committed by others because of a lack of evidence that could confirm their participation. Other than Iran’s admission that it shot down a US drone aircraft in the Strait of Hormuz in June 2019, Iran has vehemently denied any involvement in other attacks in the region, including for example, the attack on the Saudi oil processing plants in Abqaiq and Khurais in September 2019. This time, the IRGC claimed responsibility for the attacks, and widely publicised each wave of strikes, giving the US advance warning.

What we can take away from the series of events following Soleimani’s assassination is that even with all the bitterness and resentment, Iranian retribution while bold, was, at the same time, confined and circumscribed – as promised by Foreign Minister Javad Zarif in his tweet that Iranian retaliation would be ‘proportionate’ and aimed at ‘legitimate targets’. In practical terms this meant that the missiles were dropped on American military sites that were seen as a threat, and with no American casualties.

Trump’s counterintuitive ‘anti-politics’ has yielded opposite results. Shahid Soleimani is now assured of his place in the pantheon of the country’s national heroes, and in his death, he has united the Shi’a world – something that Trump had not been counting on, and another indication of the paucity of knowledge of Shi’a culture in Washington. Ordering the raid without congressional approval and without consultation with his European partners, Trump faces questions over the legality of the assassination. While the timing suggests that it was designed to deflect attention from impeachment discussions, in the middle of an electoral year, Trump has made America less safe – a diagnosis of these events that 55 percent of Americans share. Meanwhile, the US is being pushed out of Iraq, rather than pulling out on its own terms, and instead, Trump has pushed Iraq into Iran’s arms.

Iran is in shock and awe. The assassination of Soleimani will forevermore mark Iran-US relations. Trump’s subsequent threats to attack 52 Iranian sites, including those of cultural significance, was another attack, this time on the populace itself. After all, culture is people. The assassination and the tweet were two more nails in the coffin of Trump-Iran relations. However, diplomacy – like the nuclear deal – is not dead, it is in a coma. The entire debacle has shown that even during the worst crises, both Tehran and Washington remain concerned with preventing an all-out war, and this is the bright light at the end of a dark and dangerous tunnel.

The author will chair an event at the Middle East Centre on 27 January 2020 on ‘The Assassination of Qasim Soleimani and Abu Mahdi al-Muhandis: National and Regional Consequences’. Free tickets are available here. 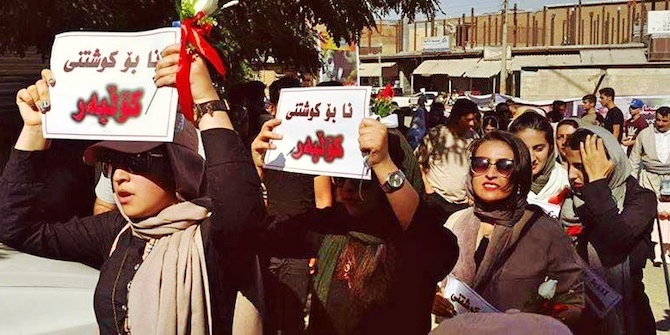