Dr Muhammad al-Issa’s unprecedented visit to the Auschwitz-Birkenau death camp on 23 January 2020, the 75th anniversary of its liberation, marked a peak in a process of interfaith momentum that has been recently evident in the Muslim world, and more specifically in the Gulf. As Secretary-General of the Muslim World League, Al-Issa is the most senior Islamic leader to visit Auschwitz. In one of the statements he made during his visit, he said, ‘The unconscionable crimes to which we bear witness today are truly crimes against humanity.’ Shortly after his visit, the foreign minister of the UAE, Abdullah bin Zayed Al Nahyan, tweeted in Arabic: ‘In memory of the Nazi Holocaust, we stand on the side of humanity against racism, hatred, and extremism,’ and Khalid bin Ahmed Al Khalifa, the Bahraini Foreign Minister, retweeted this and added: ‘Yes, it is a humanitarian issue, and the victims are innocent human beings…’. These statements by senior religious and political officials in the Arab Gulf are unusual in their explicit and outspoken condemnation of such a formative event in Jewish history and in their appeal to Arab public opinion.

The interfaith rapprochement between the Gulf States and the Jewish world, including outreach efforts towards Jewish communities, has never been so strong. Bahrain was probably the pioneer of this process, as the only country in the Arab Gulf home to an indigenous Jewish community. Bahrain has emphasised its support for this community, often celebrates Jewish holidays, and appointed a Jewish woman to a leading diplomatic role in the United States. In 2017, another precedent was set when a delegation of Bahraini clerics visited Israel to promote interfaith tolerance.

In the same year, the Abu Dhabi Louvre Museum was opened in the United Arab Emirates, where several Judaic exhibits were displayed as the country declared its ‘Year of Tolerance’. These beginnings in the UAE also opened the door to intra-religious expressions of tolerance, such as the UAE’s inauguration of an official synagogue in Abu Dhabi, alongside a mosque and a church at a shared site.

This trend is also evident in Qatar which, despite its well-known affinity with the Muslim Brotherhood, announced that it would provide kosher food for Jewish visitors from Israel during the 2022 World Cup. Saudi Arabia, as part of the Kingdom’s Vision 2030 reform programme, has also begun to interact with Jewish figures and institutions worldwide. In January 2020, Rabbi Marc Schneier was hosted by Saudi Arabia’s Ministry of Foreign Affairs and tweeted about having ‘a unique Shabbat Experience in the Kingdom of Saudi Arabia.’

What are the motivations behind this development, and why is it happening now? These actions, which are evident across the GCC countries with the exception of Kuwait (the only Gulf state that opposes even discrete normalisation with Israel), reveal a combination of curiosity, openness and goodwill towards Judaism. While lauding these actions and statements by the Gulf States towards Jews as ‘Islam’s reformation’ – as some commentators have done – may be overstating it, they certainly reflect a changing socio-political reality in the region on two levels: an internal process of identity exploration and cultural development in the Gulf, and an external process of reaching out to the broader Muslim world and the international community. Both processes are driven by the motivation to produce, define and portray a distinct national character within which tolerance and openness towards ‘the other’ comprise important pillars.

While this trend certainly poses reputational benefits for the conservative and authoritarian Gulf States, it also entails deeper motivations, similar to those that led to the intra-Gulf rift in June 2017 in the name of denouncing ‘extremism’ and radical Islam. This boycott was part of a broader internal process of redrawing the imaginary boundaries in the Gulf, not along ethnic or religious lines but along ideological ones, particularly regarding the role of political Islam. Gulf scholar Andreas Krieg describes this process as a ‘war over narratives’ that is dividing the Arab world, and of which the Gulf states have become the main sponsors. Thus, promoting openness to other religions as a manifestation of ‘moderate’ versus ‘radical’ Islam is another aspect of this process of identity construction in the Gulf. Qatar, which is allegedly positioned beyond that imaginary boundary, plays with the same cards of soft power and religious outreach to deflect its opponents’ accusations of being a supporter of extremism.

Expressions of openness and tolerance towards Judaism carry no domestic costs for the Gulf States. In the absence of a significant presence of Jewish communities in their states, this approach does not threaten their internal political stability by risking demands for greater political rights by minority groups (unlike other marginalised groups in the Gulf, such as the Shi’a in the Eastern Province of Saudi Arabia or the Bedoon in Kuwait). Furthermore, and most importantly, this trend does not entail normalising political relations with Israel. Yet, despite the separation of public opinion between the relationship with Judaism and that with Israel, the interfaith brand breaks cultural barriers and carries indirect benefits by warming relations between nations and peoples in the region.

In recent years, the Gulf states have taken on a more assertive leadership role in the Arab and Muslim worlds. The Emirati academic Dr Abdulkhaleq Abdulla defined this process of the growing regional and international importance of these states as the ‘Gulf Moment’, a period in which the Gulf states assert themselves in the regional and international arenas as new centres of political, economic and cultural power. With this self-perception, these states are becoming more invested in grand strategies of social and religious reforms, and their advocacy for tolerance and interfaith dialogue comprises one prominent manifestation of this. Given these factors, we will probably continue to see these expressions in the near future – even if Israel is not explicitly mentioned in these discussions.

Adam Hoffman is a junior researcher at the Moshe Dayan Center at Tel Aviv University and Head of the Middle East Desk at Wikistrat, a geostrategic analysis and business consultancy. He tweets at @AdamHoffm

Dr Moran Zaga is the academic coordinator of the Chaikin Chair for Geostrategy at Haifa University and a policy fellow at Mitvim, the Israeli Institute for Regional Foreign Policies. 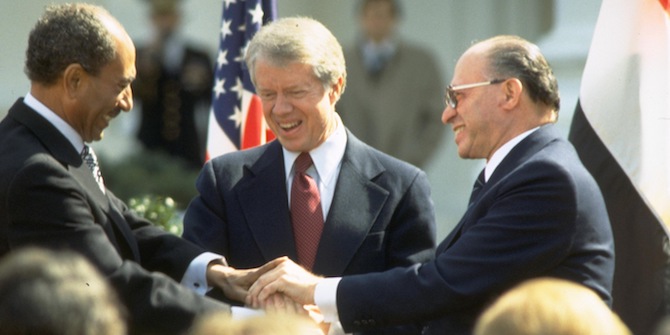 Bad Behavior has blocked 1073 access attempts in the last 7 days.