This year marks a decade since the Arab Spring erupted in Egypt over the abysmal state of the country, from political and economic insecurity to police brutality and crackdowns on civilians. President Hosni Mubarak stepped down on 25 January 2011, ending his thirty-year tenure and instilling hope among Egyptians for better days ahead. President Morsi, Mubarak’s successor, paved the way for his own undoing through his attempts at power grabs and enabling the increased influence of Islamists. In July 2013, the Egyptian military led by then Minister of Defence Field Marshal Abdel Fattah el-Sisi took over the country. Since then, Sisi has been elected President twice, in 2014 and 2018.

However, Egyptians are today still facing the same problems as they had under Mubarak’s regime, if not even more so. Around 60% of the population lives at or below the poverty line. Foreign debt has amassed from $46 billion in 2014 to $125 billion today. Freedom of speech is highly curtailed through media censorship and crackdowns on journalists. Human rights organisations and activists continue to suffer state-sanctioned violence. Civilians are being tried in military courts and street protests are effectively banned. President Sisi has also made constitutional changes to ensure that he stays in power until at least 2030. In short, the popular demands of 2011 are still unmet; instead, reports claim that the people are far worse off today than they were before the 25 January revolution.

The US-Egypt bilateral relationship under President Biden, the third American President in power during Sisi’s regime, in this context is very interesting. The US, and other Western liberal democracies, have long championed themselves as protectors of human rights. However, when it comes to the Middle East in general and Egypt in particular, American support of authoritarian rule is in stark contrast to its humanitarian rhetoric. Political repression and lack of freedom undermine human rights and create a breeding environment for the very conditions that the West wants to avoid including, but not limited to, instability and extremism. that US support to President Sisi is in blatant disregard of the human rights of the Egyptian people.

Over the past 40 years, Egypt has received $50 billion in military aid from the US, making it the second largest recipient of US aid worldwide. Military aid has sometimes been used as a bargaining tool by US administrations to push a human rights agenda. During the Obama and Trump administrations, there were short-lived and partial suspensions on aid. However, the former did not label Sisi’s rise to power as a ‘coup’ and the latter is reported to have called Sisi ‘my favourite dictator’.

President Biden has been verbally adamant on human rights in foreign policy. He even tweeted before being elected of there being ‘no more blank checks for “Trump’s favorite dictator”’. In a meeting with President Sisi in May 2021, Secretary of State Anthony Blinken stressed the importance of the respect for human rights. However, in February 2021, the State Department showed this to be merely lip service, sanctioning the release of $197 million in aid to Egypt while asserting that this aid would secure US interests by ‘enhancing’ Egypt’s ability to protect its coastal areas and the Suez Canal.

Congress is also becoming increasingly important in these dynamics; in 2020, a law was passed conditioning $75 million in aid upon progress with regards to the human rights situation in Egypt – a stipulation the State Department cannot override. However, this amounts to only 6% of the total $1.3 billion aid which Egypt receives. American experts assert that the US-Egypt relationship needs a reassessment based on human rights and the fact that Egypt no longer holds the same influence in the region. Its strategic importance as the only Arab state to have recognised Israel has also been lessened due to recent developments. Egypt is also no longer overtly pro-American; President Sisi has welcomed Chinese investments and bought military equipment from Russia. The regime’s reported support to Assad in Syria and Khalifa Haftar in Libya are also concerns for American interests. Moreover, the sole driving force behind Sisi’s policies is ensuring his regime’s stability. American foreign policy circles have claimed that all this makes Sisi an unreliable partner.

The Egyptian government has taken heed of current developments. It knows that its human rights record is a concern for its Western benefactors, whose support it needs over the dam dispute with Ethiopia. Sisi’s attempts to secure Egyptian (and his own) interests have come in the form of the release of a few political prisoners, including Khaled Dawoud and Solafa Magdy, and playing a key role in the recent Hamas-Israel conflict. Egypt’s PR problem is also being tackled by lobbying firms in Washington DC. Around the same time as Biden’s election last year, Brownstein Hyatt Farber Schreck LLP was taken on board to deal with Sisi’s image problem and encourage establishment figures in the American capital to be more amenable to the Egyptian government. The firm has focused on highlighting the geopolitical importance of Egypt in the Middle East as well as the rights of minorities in the country.

It seems that Sisi’s efforts are working to some extent; Egypt not only received military aid this year, but Secretary of State Blinken also expressed American commitment to Egypt’s water security during his meeting with President Sisi. Nevertheless, Egypt knows that it cannot keep on blatantly disregarding the human rights issue; but in lieu of taking concrete action to improve conditions, it can at least revamp its PR. However, it seems that the US will also not push the human rights agenda very hard because that would enable Russia, China and even Europe to gain sway in Egypt. President Biden’s other domestic and foreign priorities, and Egypt’s close relations with other US allies like Saudi Arabia and the UAE also make a complete overhaul of US policy unlikely.

In conclusion, there are indicators showing a flux in US-Egypt bilateral relationship owing to the human rights situation and popular Arab demands, and it seems that there will be minor changes in both the Egyptian and American courses of action. But the status quo remains unlikely to be dismantled entirely.

Nabiya Imran studied International Relations at the National Defence University, Islamabad, Pakistan, where her research focused on sustainable development. She tweets at @nabiyaimran 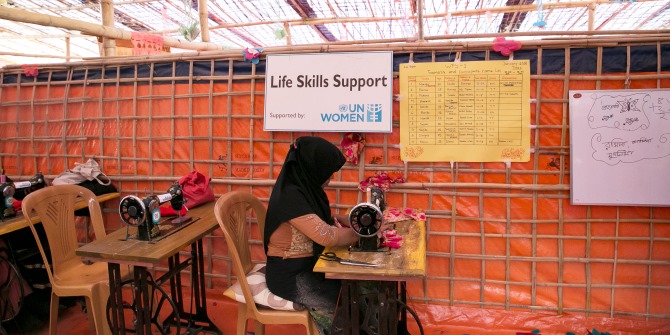 Bad Behavior has blocked 2115 access attempts in the last 7 days.