The Philosophy of the new news – shorter version

The Philosophy of the new news – shorter version

News as a profession is unphilosophical. It is full of ideas – even ideas about itself – but it rarely frames that thinking in terms of either classical or modern philosophical theory or discourse. So, it’s clear that I am not going to start from a position of philosophical knowledge when I ask this philosophical question: “What Is News?”  For most of my career the people who decided what news was were journalists. But that authority is now waning.

[You can read a longer version of this article here]

So What Is News?

That question “What Is News?” sounds like a fairly practical question.

Think of the last ‘news story’ you consumed. Most people at an LSE seminar will cite something intelligent like the New York Times’ coverage of the demonstrations in Kiev or the FT’s reporting of David Cameron’s trip to China. The more honest of you will say that you watched Tom Daley’s video on YouTube about coming out as gay, or perhaps you checked your Facebook pages to see who was kicked off X Factor?

We can start to see that what news is depends very much on who you are, where you are and what access you have to different sources. It is diverse and relative. Here’s another way to think about it.

What is News for its audience?

What are the three things you needed to know this morning?

I needed to know West Ham’s likely team for Anfield on Saturday, how to get to Liverpool by train and just exactly how the Attorney General’s advice to Twitter users might work. For the first I went to an online fanzine which has the best gossip and often has team news before it is announced officially.  The second thing I found out was direct from the rail company’s website – a handy journey planner so that could I coordinate my trip to the game with my son who lives in a different city and so get news on any works or problems that might delay our journey. Simple personalised factual information direct from the source. It is what we call ‘disintermediation’. I can get what I need to know ‘direct’. The third one on social media law policy is more tricky. I can get all the information on this direct from sources. I can also get the core arguments from the journalists at the BBC who are generally pretty objective and clear about this kind of thing. But if I want detailed specialist and stakeholder analysis I might have to work harder myself to mix sources, filter out biases and understand difficult ideas. I might have to create content myself and interact with others to develop my understanding of what the news really is about that subject. So in that sense I am having to make the news myself. I call all this ‘networked journalism‘.

The Function of News In Society

Now let’s think of news another way. Its function in society. What is news for, in relation to the state, our communities, us as citizens?

It is supposed to be the fourth estate – it provides the information that we need to deliberate about decisions that affect us as individuals and a nation. It provides the critical focus to hold power to account. It reveals what those in power do not want revealed. In short, it is the lubricant of democracy. Yet you can have extensive news media in undemocratic countries.  How this works is changing.

News is certainly an economic fact. It is a business that employs people and helps the economy to function – by advertising, information etc. News has to be paid for and ‘better’ news is much more expensive. Digital makes news-making much, much more efficient, but unfortunately, the Internet is also destroying the old business model where advertising magically paid for a package of content. So what news is, depends on the financial structure for supporting it and the way that it is consumed. That is changing.

News is cultural. It contributes directly to telling us about what is going on in our cultural worlds but it also helps forge a sense of identity. Think about your own relationship to news media where you are now or where you are normally. You have geographical news about London or your hometown or country; personal news – about your friends and family; specialised news (about your topic – dept – LSE); and special interest news – your football team, hobby, obsessions that have no geographical or social locale. And how that news happens is changing, too.

But above all news is performance. At one level it is entertainment. We are moved, shocked, delighted, intrigued by news and it fills the time. You really don’t have to consume news, but you like to. It is a ritual that marks the day, the year the lifetime we lead. Increasingly in the new media world it is about conversations, online relationships, an acting out of significance and association, even when it has no material relevance and where you have no influence or contiguity with the people, issue or events involved. That is why it is called ‘social’ media, because the sharing and connectivity is as important as the content or value of the news itself.

This could be a good thing. The hope of cosmopolitanism – as expressed best perhaps by my late colleague Roger Silverstone – was that new media technologies and practice would bring us into a relationship of ‘proper distance’ with ‘the other’. We can know about anything, anywhere, any time, but would we do more than just ‘know’  – about suffering elsewhere, for example. Could news bring us into some kind of understanding, some kind of empathy? And then could news inculcate a sense of responsibility to act?

But whatever news is, it is changing. And I think this might take us to a philosophical point where we face a need for some kind of existential re-definition of news itself.

First, some history. News has changed over time. Partly because of technology, but mainly because social, economic, and perhaps even philosophical developments. The idea of telling people something that is ‘new’ to them is as old as humanity itself. The idea of news re-cycles and is re-imagined.

All those other ways of doing news in the past, are interesting as anachronistic reminders that news has always changed. The legal scribes trained in the Inns of Court near here at the LSE, who in the Middle-Ages wrote documents for the Kings of England to tell the news of their campaigns abroad so helping to create the first state public relations service. The printers who set up in Fleet Street to start mass producing legal and financial documentation as well as the  religious pamphlets bringing the good news of the reformation. And then all those hacks who moved from the coffee houses of Covent Garden to the newsrooms of Fleet Street in the 19th century to industrialise news for a nation newly connected by railways and literate thanks to universal education. All that is about to change again.

Above all what is different now is the combination of the instantaneous and the ubiquitous. In principle, anything can be (almost) instantly known to everyone. So if something happens it must be instantly revealed and immediately loses it’s ‘newness’. News is now not new, at best it is ‘breaking’.

This has some very practical consequences for journalism. You can’t hold on to a story until your deadline. The emphasis moves away from ‘coverage’ and the repetition of facts that have already been disclosed by someone else. It moves towards analysis, commentary, reaction, contextualisation, and packaging – either by celebrity newscasters or data journalists raking through the detail. Speed is critical. News is much quicker as the 24/7 multi-platform news machine moves ever faster, spurred on by social networks that spin more rapidly than Alastair Campbell ever could.

So what happens philosophically? Digital news is conquering temporality.  What happens to the nature of news in these circumstances? I realise that in practice our knowledge is never universal, instant or total – so in reality, the production and consumption of news is still pretty familiar. But in theory news is now not new. The ontology of journalism is unstable. The very idea that news tells us something knowable is under assault when knowledge is now a click away instead of in our minds. And if something is never really new (except for an instant) then it is always a process or a stream.

This may not be a bad thing, of course. Though I ask the philosophers for some help on what we mean by ‘good’ or ‘bad’ and the idea of a ‘good’ media life. It may be that for news people – like me – we are seeing a rediscovery of the human and the narrative. 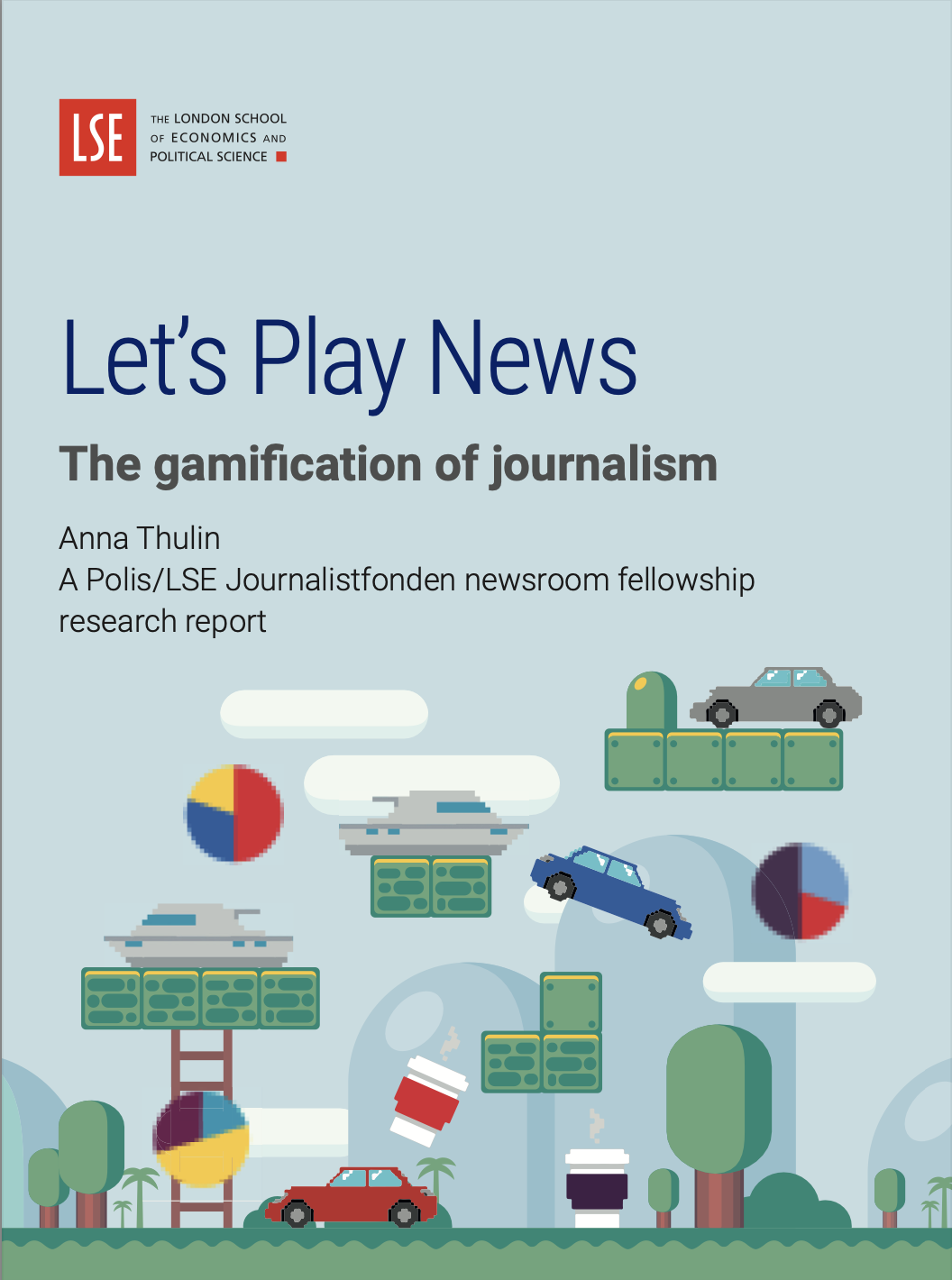 The gamification of journalism: a new research report