As India’s president approves the death penalty in cases of rape that lead to the victim’s death, Yug Chaudhry and Sivaramjani Thambisetty analyse the implications of Ajmal Kasab’s execution.

Just over four years ago, Ajmal Kasab walked into Mumbai’s Chatrapati Shivaji Terminus railway station and ‘waged war with India’. He reportedly told police he wanted to replicate 9/11 in India. He was prosecuted, convicted and, on 21 November, executed by the Indian Government. We were two of 203 people who signed a petition that was presented to the President of India under Article 72 of the Constitution that appealed to his power to grant mercy to a convict after the Supreme Court has confirmed the death sentence. As an appeal for mercy, the petition did not rely on substantive legal grounds or due process. The events leading up to the execution strengthen the view that the due process guarantee of the Indian legal system cannot protect prisoners from the lottery based on poverty, class, caste geography and prosecutorial independence that the death penalty continues to be. 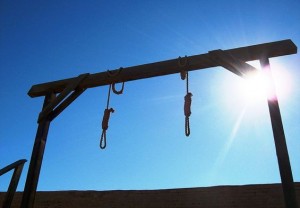 Kasab’s execution now threatens the lives of 400 convicts on death row in India because it ends the effective, not formal moratorium on execution in place for the last eight years. The impact of Kasab’s hanging can be gauged now that the trial of five men accused of gang raping and murdering a student in Delhi is underway. In any case the men face the death penalty if convicted, but the brutality inflicted by the perpetrators has spurred many to publicly call for the death sentence to be imposed in rape cases, irrespective of death of the victim. In South Asia, India stands with Afghanistan, Bangladesh and Pakistan in holding on to the death penalty. Since 2007, when 104 countries were in favour, support for a UN-led global moratorium on the death penalty has been growing. The UN General Assembly is expected to reiterate the call later this year. Nepal and Bhutan have already abolished the death penalty, while Sri Lanka and the Maldives have abolished it in practice.

Once a mercy petition is rejected, the prisoner and those who petitioned the President for mercy on behalf of the prisoner have to be informed about the rejection. Similarly, the Maharastra Prison Manual stipulates that once the State Government has fixed the date of execution, the date must be communicated to the prisoner and his relatives. It is well settled in law that the President’s decision is subject to judicial review and therefore the prisoner and those who petitioned on his behalf have a right to challenge the rejection of the mercy petition. Apart from this, a prisoner may also have various other grounds to challenge the government’s decision to execute the prisoner. These challenges do not question the correctness of the judicial verdict, but are based on subsequent events.

The mere fact that a particular procedure has been stipulated in the rules is not enough to justify it: that procedure has to pass the further test of being fair, just and reasonable. Though Kasab’s mercy petition was rejected on 5 November, and the Maharashtra government was informed about this on 8 November, the prisoner himself was only informed about the development on 20 November, i.e. the day before his execution. The government’s responsibility to inform the prisoner’s family was purportedly discharged by sending a fax to the Pakistan embassy on 20 November, though Kasab’s full village address was available to police and jail authorities. Those who petitioned the President for mercy for Kasab learnt about the rejection of their petitions through the media only after Kasab had been executed.

This violation of established procedure and the unreasonable secrecy are troubling but the reasons given by the government are even more so. The Indian home minister and the Maharashtran Chief Minister in separate media interviews admitted that the rejection of the mercy petition and the date of execution were kept secret because they did not want human rights activists to move the courts and obtain injunctory relief. This is an extraordinary admission of defiance of the law in order to prevent recourse to lawful remedies.

The Government of India’s apparent distrust of the law was shared by the Supreme Court when it admitted error in at least 13 cases of convicted prisoners sentenced to death. In July this year, 14 senior judges appealed to the President seeking intervention to commute the death sentence in these 13 cases. The Indian experience of the death penalty is replete with flawed forensics, police and prosecutorial corruption, false witnesses, false confessions and miscarriages of justice. There has also been ‘a pattern of confusion, contradiction and aberrations’ in such cases. Yet, the last time it looked at the question in depth in 1992 the Supreme Court decided that India could not risk the experiment of the abolition of capital punishment.

Consider the following concerns about due process in the prosecution of Ajmal Kasab.

1. Kasab’s court-appointed lawyer, Abbas Kazmi, began by making an application seeking an inquiry into Kasab’s age on the grounds that he appeared to be about 17-19 years of age and therefore a juvenile. The application was summarily rejected as being nothing but a ‘time wasting tactic.’ The order is part of the Roznama. The Prosecution realised that this would give him grounds for appeal, and so a few days later, the Prosecution made an application with an identical prayer – to conduct an inquiry into Kasab’s age – and this time the application was allowed. This should be a sufficient indication of the lack of fairness of the presiding officer.

During the inquiry, relying on the expert evidence of doctors, the prosecution stated on the basis of X-Rays that Kasab was about 21 years old. When the defence asked in writing to be given a copy of these X-rays so that they could be shown to their experts, the request was turned down.  Kazmi was told that his witnesses could see the X-rays when they stepped into the box to give evidence, and there was no need to furnish these in advance.

2. The chargesheet in this case runs into more than 20,000 pages. Kazmi asked to be given sufficient time to study these papers and prepare for the trial. He was given two weeks, most of which were spent in court for the juvenile application.

3. During the trial, Kazmi sought permission in writing to be allowed to visit the various places connected with the offences or the investigation, the most important being the boat, allegedly recovered under Section 27 of the Evidence Act, which contained Kasab’s finger prints, DNA and the body of the murdered boatman. A study of the spot was necessary if Kazmi had to cross examine the various witnesses who deposed to these aspects of the case. Permission was refused.

4. The bulk of the charges against Kasab pertained to attempting to murder or causing injury (simple or grievous) to various persons injured during the attacks. Specific charges were framed in this regard. During the trial, the judge allowed the prosecution to prove these charges by affidavit evidence instead of by oral evidence. Under Section 296 of the Criminal Procedure Code (Cr.P.C), affidavit evidence can only be given on formal aspects of the case. Here it was being allowed for issues that were the subject matters of the various specific charges.

When Kazmi opposed this affidavit evidence, he was summarily dismissed from the case. Kazmi’s objections, if groundless, could have been dismissed, but how could Kazmi have been dismissed? There was no misconduct on his part. Moreover, there is no power in a judge under the Cr.P.C to dismiss a lawyer (a judge can report a lawyer to the Bar Council if s/he wishes). Writing on the front page of the Mumbai Mirror, Fali Nariman argued that this dismissal of Kazmi rendered the trial unfair.

Apparently Kasab claimed that he participated in the terror attacks for “roti”. Given the crushing poverty that still exists on the subcontinent, the deterrent effect of Kasab’s execution is questionable. And if we could not follow due process in letter and generous spirit in this major case, what hope is there for other current and future convicts? In recent weeks, in addition to public support for the death penalty for the men accused in the Delhi gang rape case, there have been renewed calls for the execution of Afzal Guru, convicted of a terrorist attack on the Indian Parliament in 2001.

And what of Article 72 of the constitution? There are those who claim that an appeal for mercy should not have been made given the Supreme Court’s confirmation of the penalty. However, Article 72 only comes into play after the conviction and death penalty is confirmed by the Supreme Court, showing that grounds for mercy is distinct from substantive legal or procedural grounds. Indeed, the justification for mercy has its roots not in merit, but in need. All of us – the best and the worst – are in need of mercy, and it is only by showing mercy that morally, we ourselves become entitled to receiving it.

For more commentary on criminal justice, see “Due process threatened? What the Delhi rape case reveals about justice in India“.

Yug Mohit Chaudhry is a human rights lawyer based in Mumbai, and author of Yeats: The Irish Literary Revival and the Politics of Print.

Sivaramjani Thambisetty is a lawyer who teaches and researches on patent law, innovation and legal institutions at LSE’s Department of Law. Follow her on Twitter @sivathambisetty.