Hemal Shah reports from Delhi on a workshop exploring whether there is an emerging democratic growth model in India, Brazil and South Africa, as an alternative to a Chinese-style growth model.

Like other rapidly developing countries, India has recently struggled with a stalled reform process and low growth—over the past two years, average annual growth has dropped below the levels experienced during the financial crisis of 2008-09. Several of India’s BRICS counterparts, Brazil and South Africa, are facing similar problems. Some have been tempted to argue that their problems lie in their democratic political systems and that perhaps the ‘Chinese model’ of authoritarian growth could be better for all three.

A consortium of think tanks* has recently come together to discuss the relationship between democracy and development in India, Brazil and South Africa and to interrogate the nature of their democratic growth “model.” On February 19 and 20, the think tanks held their first workshop in New Delhi. The two-day meeting ended with a talk by Raghuram Rajan, chief economic adviser to the Government of India. He emphasised the importance of communication by the political elite and of informed debate amongst the citizenry. Without both, it will be impossible to carry out further policy reforms.

Rajan argued that there are some circumstances in which democracy impedes global cooperation and others in which it enhances such cooperation: “My sense of where it impedes is often, not always, when there is inadequate communication between the leaders and their people about what issues are at stake, and indeed the attempt is to use global organisations as proxies for doing things at home which in fact they don’t want to do directly.” He pointed to the problems in the Eurozone as a classic example: the crisis gave politicians room to take bold steps, but they were unable to persuade the public of the need for action. In India, too, the government has failed to make a clear-cut case for new economic reforms which are required to revive growth.

Acknowledging that few countries want the World Bank or the IMF to “preach” to them, Rajan called upon international organisations to focus on the grassroots, engage directly with the people, and create more awareness of the need for economic change: “People will know that they have to ask these questions of politicians—as an attempt not to dilute sovereignty but to improve the quality of global citizenship.”

In response, Ann Bernstein, director of the Centre for Development and Enterprise in Johannesburg, explained that Nelson Mandela’s personal “conversion” from communism to liberal capitalism was never properly communicated to the people in the country. “So this seemed like an elite decision. [The ANC] converted to markets but still used Leninist language and, more importantly, they didn’t convert their own party, never mind anyone else in the country.” As a result, South Africans find it difficult to debate economic reform even today. Bernstein also questioned Rajan’s advocacy of global organisations, especially some NGOs. ‘Global’ ideas are sometimes bad for a particular country since they can hold back development, she argued.

Anne Applebaum, the Philippe Roman Chair in History and International Affairs at LSE and the Director of Global Transitions at the Legatum Institute, further pressed the point that one needs to be wary of global movements. She noted that although the Occupy Wall Street movement reflected popular sentiment it became self-obsessed and self-referential, and thus failed to use the tools of American democracy to press its case. She suggested a parallel to the 2011 anti-corruption movement started by Anna Hazare in India and asked, “How do we make sure that mass movements, protests and organised strikes get institutionalised in broader democratic politics?”

Adrian Wooldridge, management editor of The Economist, also observed that NGOs and global bureaucrats do not necessarily produce policies that resonate with the public.  But he argued that global institutions could forge a “creative relationship” and encourage competition amongst different countries to be more productive. The World Bank’s Doing Business Index is an example of a project which works: many countries are conscious of their place on the list and want to boost their business indicators to do better than their peers.

In his response, Rajan argued that the bigger point is to put the global issue into the agenda for discussion rather than force through policies in democracies. He also reminded everyone that although the Indian anti-corruption movement lost focus, it did get the attention of the government—the Lokpal Bill is being considered in Parliament after almost four decades of neglect, and the government has been compelled by public protest to strengthen laws governing sexual violence. “Having some external agency [insert] some of those issues – not with the idea of imposing policies, but encouraging debate and having democracy kill the lunatic fringe – would be reasonable,” he said.

In my opinion, Rajan made a passionate argument for the role global institutions can play to develop the quality of debate at home, particularly since domestic policies do have international externalities. Of course there are caveats, which were spelled out by the various participants, adding value to the debate. Pratap Bhanu Mehta, president of the Centre for Policy Research in New Delhi, concluded with a broader question: “Besides the democratic mediation through voting, how do politicians actually pick up signals for change?” Perhaps a more engaged citizenry could help the political class be more confident in making their case for reform.

*This project, ‘Democracy Consensus’, is a partnership between the Centre for Development and Enterprise in Johannesburg, Centre for Policy Research in New Delhi, Instituto de Estudos do Trabalho e Sociedade in Rio de Janeiro, and the Legatum Institute in London.

Hemal Shah is a researcher at the Legatum Institute, a London-based think tank. She completed her Masters in Development Studies from LSE in 2010. Follow her on Twitter @hemalshah_7 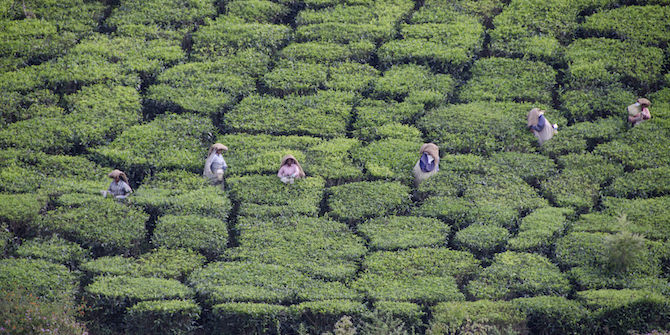