At a recent talk, Kavita Krishnan explained that India’s anti-rape movement sought to confront the multiple contexts of gender-based violence.

Last week, LSE’s Gender Institute hosted a talk with Kavita Krishnan, Secretary of the All-India Progressive Women’s Association, on India’s anti-rape movement following the brutal rape of a student in Delhi in December 2012. Addressing a packed room, Krishnan reflected on the experiences of anti-rape activists, the wider questions about women’s freedom that the movement raised, and the need for greater transnational feminist solidarity. 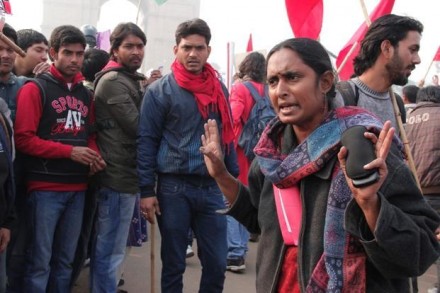 Krishnan explained that one of the movement’s first challenges was to jolt discourse following the student’s rape and death out of the realm of patriarchy. Initial condemnations against sexual violence focused on protecting and avenging women, and sought to take away women’s freedoms under the guise of securing them. Activists therefore demanded ‘freedom without fear’ rather than ‘protection’.

The movement was also quickly forced to confront the broader realities of gender-based violence in India. According to Krishnan, in addition to agitating against rape, activists began to address sexual violence in multiple contexts: rapes by security forces in Kashmir in the name of curbing insurgency; control of women’s sexuality as a way to maintain the caste system; rape as a form of discipline used by feudal entities to assert their entitlement over women’s bodies and labour.

As protests continued through the early part of this year, the movement also had to challenge the profiling of certain communities (e.g. Muslim men, migrant workers) as sexual aggressors by pointing out that women, too, are migrant workers, and that some of the worst gender-based violence occurs in middle-class homes. Krishnan also described how the movement challenged the positions of khap panchayats (caste-based village councils), which have previously blamed women for the crime of rape and been involved in ‘honour’ killings in Haryana with the support of local politicians and the police.

Anti-rape activists also had to challenge attempts by different political actors to hijack the anxiety around sexual violence to use for their own agendas, whether communal, economic or otherwise. For example, Krishnan recalled RSS chief Mohan Bhagwat’s controversial statement – “[rapes] hardly take place in Bharat, but they frequently occur in India” – that sought to draw distinctions between traditional and westernised India, and sparked anger against political hypocrisy.

In this context, Krishnan argued that useful women’s movements have to pose complex problems and emphasise that there are no “short-cut” answers. She felt India’s anti-rape movement had demonstrated that feminist movements could retain complexity even while being accessible and engaging in public dialogue. “We had a huge response when we unpacked [the issues] and people were grateful to hear what we had to say—people aren’t only looking for simple sound bites,” she added.

Throughout her talk, Krishnan shared images from the movement on the streets of India, including photographs showing Kashmiri students protesting custodial rapes; women holding up posters calling for the death penalty for those convicted of rape; and activists remembering Soni Sori and Bilquis Bano, rape survivors who did not see adequate justice. She also described how unprecedented anti-rape protests occurred on January 26, India’s Republic Day, which is usually given over to patriotism. According to Krishnan, seasoned women’s rights activists were hesitant to protest on Republic Day, but many first-time protestors were insistent that they wanted to take to the streets on that day, “to put the public back in the republic”.

Krishnan also called for the women’s movement to be seen in broader contexts. She pointed out that gender-based violence in India is often explained in Marxist terms that point to feudal legacies as the structural basis of gender inequality and rape. But Krishnan called for this argument to be problematised, and said that gender-based violence should be seen in the context of neoliberal economic policies, whereby sexual violence facilitates the way for global capital to exploit Indian women’s labour by playing on their specific vulnerabilities, including sex, caste and poverty. She also called for this kind of gender-based violence to be acknowledged as a global phenomenon, citing recent examples of comments by Republican Senators in the United States and ‘slutwalks’ in Canada.

To conclude, Krishnan asked how the anti-rape movement could be sustained as a political agenda. To start answering her question, she suggested that the movement’s call for ‘freedom’ should be about more than women dressing as they please without inviting rape—“it should be about other kinds of autonomy, looking at freedom in different contexts.”

Bad Behavior has blocked 806 access attempts in the last 7 days.