Pallavi Bansal describes how entrenched gender expectations lead to Indian women being judged on the basis of their attire.

The phone rings. You answer it to learn that you have been selected to interview for a job at a prestigious government organisation. Being a woman, you think, what am I going to wear for the interview? You decide on a conservative white shirt, black trousers and professional black heeled shoes. On the day of the interview, your interviewer looks you over and says, “You would be very disappointed, this is not a glamorous job.” 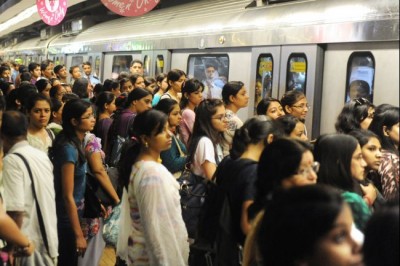 Moments like this have made me wonder what counts as appropriate professional attire for Indian women. There are no dress codes on most local organisations’ websites. My friends suggest that an ‘Indian suit’ would be more suitable for a government organisation, indicating a serious commitment to development work. I also remember being asked to wear Indian ‘kurtis’ to press conferences while working for a newspaper in India as that would make me look the part of a journalist. Politicians, meanwhile, are expected to wear ‘khadi’ (hand-spun cotton) clothes, which symbolise purity and clarity.

Thanks to entrenched expectations about female attire in India, women alter themselves into costumed actors to suit the retrograde public mindset. For example, Rakhi Sawant, a Bollywood actress, changed her avatar before deciding to contest the 2014 Lok Sabha elections, swapping shirts and trousers for kurtas, pajamas, and occasionally a headscarf. Can an outfit help Sawant shed her ‘item girl’ image? Would western wear make her any less serious about getting involved in politics?

How can clothes determine a person’s character, behaviour or aptitude? Stuart Hall offers the concept of ‘stereotyping’ as one explanation: “stereotypes get hold of the few ‘simple, vivid, memorable, easily grasped and widely recognised’ characteristics of a person, reduce everything about the person to those traits, exaggerate and simplify them, and fix them without change or development to eternity” (p. 258). In common Indian perception, Indian clothes make women seem traditional while western clothes mark them as modern and liberal. Stereotyping “sets up a symbolic frontier between the ‘normal’ and the ‘deviant’, the ‘normal’ and the ‘pathological’, the ‘acceptable’ and the ‘unacceptable’, what ‘belongs’ and what does not or is ‘Other’, between ‘insiders’ and ‘outsiders’, Us and Them,” (p.258). Similarly, Mary Douglas argues that whatever is “out of place” is considered to be polluted, dangerous or taboo—people try to exclude it to reinstate the ‘purity’ of their culture.

Traditional gender stereotypes amplify the problem. Unlike the fluidity of gender constructs found in other parts of the world (particularly developed nations), the lines of gender are quite rigid in India. Long-held gender expectations lead people to believe that women should be ‘taught’ how to dress and what to wear, leading to a rulebook for women on ‘how not to dress’.

That rulebook is constantly evoked in public debates about rape and other gender-based violence. Indian women are lectured by so-called opinion leaders about inviting rape by wearing “provocative” clothing. In response to the gang rape of a student in Delhi in 2012, for example, a legislator in Rajasthan called for a ban on skirts as part of the school uniform for girls, citing it as the main cause for an increase in sexual harassment cases. Abu Azmi, leader of the Samajwadi Party, also said in January 2013, “women should not wear less clothes and roam around with boys who are not their relatives.” Similarly, Asha Mirje, a Nationalist Congress Party leader in Maharashtra, argued that “rapes take place … because of a woman’s clothes, her behaviour and her presence at inappropriate places.” More worryingly, in a survey of Indian judges conducted in 1996, 68 per cent of respondents described provocative clothing as an invitation to rape.

These statements are not surprising as they represent a swath of popular opinion informed by deep-seated chauvinism. This chauvinism stems from the past, when Hindu and Muslim women had to cover their heads with the ghoonghat or veil, both as a status symbol, but also as a means of patriarchal control.

More than history, however, I am intrigued by the present portrayal of women by the Indian media, particularly in soap operas. No doubt, television shows conceptualised by producer Ekta Kapoor have revolutionised the industry by portraying confident and assertive women within the bounds of the family structure. But even Kapoor’s were never clad in jeans or other ‘provocative’ outfits, no matter how strong their personalities. Following the Kapoor era, television shows focused on serials based in small towns and villages that led to a return of women in ghoonghats to the small screen, further reinforcing the stereotype that women who wear Indian clothes are traditional and subtle in their behaviour and character.

Fortunately, the television industry seems to have caught up with the sartorial predicament of contemporary Indian women—not to mention the obscurantist views regarding victims of sexual violence. Zee TV, for example, has increasingly portrayed leading actresses in jeans and other western clothes. These icons even go as far as to defend their attire-related choices and state, “my clothes do not represent my character.” Hopefully through such initiatives, India will realise that women’s morality, integrity and professionalism cannot be ascertained from what they wear and how they are perceived, but how they behave as individuals.

Pallavi Bansal completed an MSc in Media, Communication and Development at LSE’s Department of Media and Communications in 2012 and is currently working with The Times of India, where she isn’t judged by what she wears.

Hall, S., (1997) “The Spectacle of the Other” in Representation: Cultural representations and signifying practices, Sage Publications.

The kingdom of Kandy in Sri Lanka: Challenging narratives of British colonialism