Public services and their related public grievance redressal are usually the first point of contact between citizens and government. Often, it is also the most disappointing experience. This raises the question of how urban governance can evolve – in light of increasing population and migration – in the delivery of public services. Can local governments move beyond the traditional approaches of urban planning? 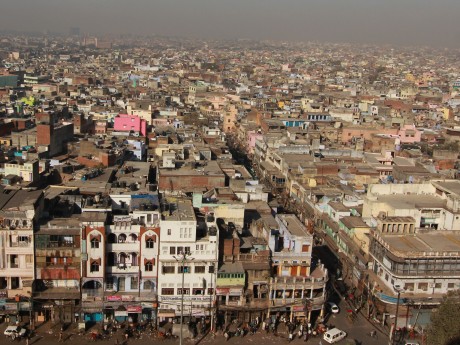 Experience shows that there are three major issues that are at stake when a city such as Delhi grows at a rapid pace. The first concerns the living conditions of a growing population—acute shortages of basic infrastructure (housing, water, sanitation, transport and electricity) resulting in major environmental problems for all city-dwellers and extremely poor living conditions for slum-dwellers. The second issue pertains to the economic development of these megacities. Such megacities are the engines of growth of the country, the governance of which has serious implications for economic growth. The last issue is political in nature: what are the means through which the citizens can participate in decisions that directly concern them?

Delhi’s governance structure has been a cause of angst for its citizens because it is a special union territory (UT). Delhi has been adversely affected by high rates of urbanisation and industrialisation, aggravated by population growth, increasing air and water pollution, land encroachment, uncontrolled migratory labour, falling standards in the provision of civic amenities, and more.

The burden on government agencies has grown immensely as Delhi has encountered high rates of population growth through natural population increase as well as net migration. Public services are heavily burdened—the demand for water has exceeded supply by around 120-170 million gallons per day since 2000. Preliminary findings of a study commissioned by the urban development ministry at the centre have found that the availability of public transport (buses and metro) in Delhi per 1,000 people is an appalling 0.504. Moreover, the average waiting time for all 517 Delhi Transport Corporation (DTC) routes is 70 minutes. Social infrastructure such as health and education are pitifully inadequate.

In the context of Indian megacities, Stephanie Tawa Lama-Rewal writes that Indian cities are characterised by a multiplicity of institutional actors, both public (municipal cooperations, parastatal agencies, etc.) and private (corporate sector, organised civil society), which can be an obstacle to transparency and accountability. The overlap of the various actors of urban governance impacts negatively on their collective efficiency and there is a strong need for coordination among the multiple agencies.

She also notes the emergence of “neighbourhood associations” or “citizen groups” as a means of collective action in response to poor governance. A striking aspect of these associations is that they are essentially middle class in nature, and the general apathy of the middle class, evident in their voting patterns, is contradicted by the activism demonstrated by these associations on local issues.

What does this trend mean for urban governance in a city like Delhi? Are some citizen groups more equal than others in their activism or is it really a level platform for all? Delhi’s example suggests that participatory governance could be a double-edged sword, resulting in certain groups overriding the opportunity.

The issue of making public service delivery efficient and transparent in an equitable manner is an important parameter for urban governance. Delhi’s population is largely middle class and so has the access and means to get things done. But what about those at lower social strata?

A World Bank paper (2005) disputes the fact that low demand for social services by poor people is a likely explanation for failures of social service provision. The paper argues that political competition has failed to induce the optimal provision of public good. The lack of credibility of political competitors is the final major disruption in the relationship between citizens and governments. Can a significant governance process restructuring such as incorporation of e-governance improve delivery of public services for all?

Imperfect information on the provision of social services had added to the problem. Politicians are encouraged to cater to special interests, thereby distorting incentives to provide social services to poor people. Measurable benefits of government process reforms may not emerge until several years after the policy action has been taken, making it difficult for voters to reward (or punish) political actors within a particular electoral cycle. Moreover, if voters are particularly uninformed, broad social services suffer as political actors would make policy concessions to those who have organised themselves.

Jennifer Bussel in her book, “Corruption and Reform in India: Public Services in the Digital Age”, studies the impact of technology-enabled public services in India. Research on technology-enabled reform suggests that service centres can increase the transparency of public service delivery and reduce corruption. She suggests that where politicians rely on the support of lower-income citizens, services would reflect the demand for improved provision of welfare and related benefits, whereas in areas where incumbents depend on the support of upper classes, services such as tax payments and property records would be more prevalent.

Despite the many administrative obstacles, in the case of Delhi state, there is an urgent need to re-engineer the way in which public business is handled. When it comes to public services, citizens should be the priority and have little patience for the quirks of the formal administrative setups under which they are governed. They would ideally like their requests to be handled within a reasonable timeframe, in a courteous and transparent manner. When this does not happen and the grievance redressal mechanism does little to help the situation, public trust and confidence is undermined. Poor grievance redressal also leads to social inefficiency because it feeds alienation, frustration and anxiety, which can consciously or unconsciously, colour conflict. It’s high time Delhi tackled its urban governance challenges in a holistic manner, including exploring the benefits of technology-enabled public services.

Rohit Sinha is a researcher with the Madras School of Economics.