On 27 November Dr Sanchita Saxena will speak at LSE about her book Made in Bangladesh, Cambodia, and Sri Lanka: The Labor Behind the Global Garment and Textiles Industries. Ahead of her visit she spoke to Sonali Campion about how her findings challenged the media portrayal the garment industry in Asia and highlighted the strength of the female-led labour movement in Bangladesh. She also discussed the failure of Western brands to promote structural reform following the Rana Plaza collapse.

How significant is the garment and textiles industry to the Bangladesh and Sri Lankan economies?

In Bangladesh it’s more than 90% of its exports, in Sri Lanka it’s around 50%. Both of these countries are extremely dependent on the sector, which is how I got interested in the project, around 10 years ago.  At that point, Multi Fibre Agreement quotas designed to limit the amount of exports from developing countries into the global north were due to expire. For 40 years countries like Bangladesh were guaranteed a market share and the industries flourished. Then in 2005 the quotas expired and in the lead up there was a lot of fear that these countries were just going to lose their entire sector. Now of course that didn’t happen, but that’s where I start the analysis: once the quotas expired what kind of strategies did these countries use?

Unfortunately I feel like the countries did not learn from the quota expiration in the sense that they did not diversify – at all in the case of Bangladesh. Sri Lanka has done better. Tea is also a major export, and they have other commodities.

When we talk of the garment industry in Asia – and Bangladesh in particular – the image is one of exploitative international companies forcing low paid workers to work long hours in poor conditions. How does your research challenge these perceptions?

That’s the image we have in the fed by the media, which unfortunately only covers the industry following horrific disasters. But I’ve spent time in these countries talking to workers and others in the sector. It certainly is a difficult sector to work in, and that is true anywhere, even in New York or in parts of LA where there’s a sizeable garment industry with a lot of immigrant labour. But there’s a much larger story than that, and I think the sector has contributed quite a bit, especially to women’s empowerment.

I don’t think it’s a story where these women – I’m saying women because it’s mainly women who are employed – are “victims of globalisation”. They definitely work extremely hard, they face very difficult situations, but they had a lot of power in the sense they did have the ability to enact changes, even if the pace of change was very slow. They are very strong women, they know what they want, they do know how this sector benefits them. They’re portrayed as victims who need to be rescued and I wanted to challenge that narrative. Especially in Bangladesh, because that’s where we hear a lot of the negative press, but one of the things my book argues is that actually the labour movement is really much stronger than Sri Lanka or Cambodia, and it is a female-led labour movement in many ways.

You outline the idea of this domestic coalition as a mechanism for pragmatic cooperation between key groups. Could you tell me more about your framework?

In the book I use the theoretical framework of policy networks. These are prevalent in the policy literature but tend to apply to developed countries. I thought that this was a useful framework but I wanted to adapt it to a developing country. The policy network idea assumes that you are going to have a well-functioning democracy where interest groups are readily engaging with the state. But in all three countries, while they are “democracies” they really vary in terms of quality, and so the role of interest groups in general varies. So this adapted approach of domestic coalition serves as a more useful framework. The private sector and the government in all these countries have always been very close, those relationships and networks have been very tight – but it’s really labour groups and workers that were left out of the picture. And only in the last 10 years have we started to see a slight opening of the coalition in all these countries. Once the quotas expired, it could not be business as usual. The states realised that had to include the labour, and then labour groups what to make certain changes, so there is this mutual interest on both sides.

You discuss the contrast between Bangladesh’s labour environment being more open to unions, compared to Sri Lanka and Cambodia. Why Sri Lanka might be more hostile to collective bargaining?

Historically, Sri Lanka was very pro-union but around the time the civil war there was an extreme crackdown on unions and labour organisations. So officially there are now no unions. There are other mechanisms for workers to express concerns, such as “employee councils”, but if you talk to workers they are very dismissive. There are very vocal and charismatic labour leaders in Sri Lanka and they are really having to fight these token efforts by management that at factory level.

Ironically, Sri Lanka is a country that tries to market itself as very strong on labour rights and conditions. They often contrast themselves with Bangladesh, saying “our factories are not collapsing, we don’t have all the negative things that they do”. Yet the labour movement is very suppressed, particularly compared to the organisation you see in Bangladesh. The female-led movement in particular is very strong: women are heading federations and NGOs, they’re working on training and awareness. There are still unions that are very male-dominated, very hierarchical, sometimes they actually bully the female workers into joining -factory-level unions are a mixed bag in South Asia in general.  But in Bangladesh there are other options, these other ways of organising, NGOs, women’s organisations. These options are virtually absent in Sri Lanka and Cambodia. That was one of the most interesting findings in my research, and one which I did not expect going in. I find the story more hopeful in Bangladesh. Change is very incremental – it’s not something you always see – but looking at the overall trajectory compared to 10 years ago there is quite a bit improvement.

In your book you allude to the contradictions between the core labour standards set by governments and the competitive capitalist structures of the brands and retailers, which seems to compromise the labour standards. What kind of policy recommendations would you make instead?

A lot of the improvements in Sri Lanka and Cabodia are almost dictated. In Sri Lanka, the “Garments without Guilt” is a national level marketing campaign between the private sector and the government which leaves out labour groups and their opinions. They’re not a part of the discussion at all. Although you do have improved standards, the coalition has really not opened up to include labour.

This often happens with top down programmes. One of the things that I’m working on now is looking at interventions after the Rana Plaza collapse and what the Western brands have tried to do. The problem is that often there is a parallel track: western brands don’t want to be associated with disasters. So they employ others. The two big companies that are in Bangladesh are Alliance and Accord, who inspect the factories and try to figure out if they are compliant. But this takes away from the discussion around the supply chain and the extreme pressure that these factories face. Ultimately the brands put the onus on the factories and say “you have to be compliant”, rather than reassessing their own cost cutting and lack of interest in enforcing labour standards – there’s a lot of reasons behind that which has to do with how the entire industry is structured.

There’s a whole bunch of issues that I think if they were addressed could deal with labour standards in a very direct way. The compliance business has almost become a business in its own right after Rana Plaza, with tonnes of people now employed to check what the factories are doing , but it is a very indirect way of trying to improve the sector. What’s more, Alliance and Accord are only supposed to be there for five years. Once they leave, what have they done to make it sustainable? Will we go back to business as usual despite all this money that went into it? So it’s only addressing a small piece of the larger picture. It doesn’t promote structural change.

Dr Saxena will speak at LSE on Friday 27 November at 4pm. The event is free and open to all. Details on the SAC website here.

Cover image: Bangladeshi Garment Workers march to mark the anniversary of the Triangle Shirtwaist factory fire in the USA, and the deaths of 502 of their comrades in factory fires since 1990. NGWF photo via Flickr CC BY-SA 2.0 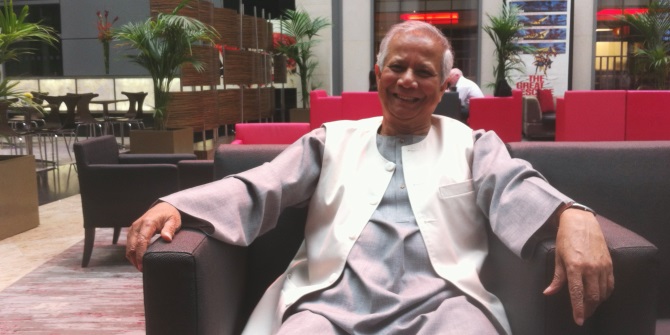 Bad Behavior has blocked 3568 access attempts in the last 7 days.