Tamil Jains, a minority indigenous to Tamil Nadu, face an uphill battle of protecting their unique heritage. The task has been undertaken disparately by the State, the community and NGOs. Mahima A. Jain writes on the challenges of protecting Jain heritage and attempts to reshape the historical narrative.

This is the second of two South Asia @ LSE articles by Mahima A Jain on the Tamil Jain community. Read her first piece ‘The Tamil Jains: A minority within a minority’ here.

“When it is considered what time, what money, and labour must have been expended in cutting away the rock alone, which is of a darker colour, and much harder than the ordinary grey granite found in the South, — to say nothing of the labour required to shape the rock and carve it in this wondrous fashion, — it seems sad indeed that such a gem should be lost in so out of the way a place, where even the inhabitants ignore its very existence.” — Captain Edmund David Lyon’s reflection on Kazhugumalai in 1868.

From the Big Temple in Thanjavur to the Airavatesvara temple in Darasuram and Arjuna’s Penance at Mahabalipuram, there is a long list of popular Hindu sites that have acquired primacy of position as architectural marvels. They showcase some of the best of South Indian art — the height of the Southern kingdoms of Cholas, Pandyas and Pallavas illustrated exquisitely in stone and standing tall for centuries.

But these Saivite and Vaishnavite sites are just one aspect of that glorious picture. The other part is formed by Jainism and Buddhism, both of which were once dominant in the region and played a key role in shaping the South Indian community, its literature and culture. While little of the Buddhist heritage remains, substantial portions of the Jaina heritage have managed to make it to the 21st century. But this too has been slowly fading away over the last few centuries.

This article deals with the Jaina heritage in Tamil Nadu and the efforts and challenges to conserve it. It also addresses how the preservation and wider awareness of this heritage is crucial to challenging popular perceptions of Jain history.

The Tamil Jains, are a minority within the Jain minority, with a population of just 25,000-35,000. An over-simplified narrative that has relegated the Tamil Jains to a distant past goes as follows: The Jains (and the Buddhists) were present for some years in Tamil society, but the forces of the Bhakti movement in the 7-8th century AD vanquished them. After constant religious persecution and conversion, the community was suppressed and forgotten.

However, in ‘The Story of the Disappearing Jains’, Richard Davis writes that this “standard narrative” collapses social and religious conflict into a short period and quickens the pace of the end of Jainism at the hands of the Hindus. It also considers Jainism and Hinduism as ‘cohesive’ and with fixed traditions, doctrines and practices. He argues that this de-emphasises the continued presence of Jainism in Tamil Nadu.

Yet today the scattered Tamil Jain population and rich literature are evidence that the community was never really “vanquished”, and remains a part of contemporary society. This is reinforced the vestiges of their physical heritage that persist today.

A recent survey by Institut Français de Pondichéry indicates there are more than 450 Jain monuments and sites across Tamil Nadu. While the sites at Kazhugumalai, Chittaral and around Madurai are well known, smaller sites and stand-alone statues are often overlooked. The nature of such heritage can be broadly categorised as follows: structural temples (like the Trilokyanatha Temple in Tiruparuttikundram, Kanchipuram district); caves (like the ones in Samanarmalai, Madurai; there are around 16 caverns around Madurai itself); bas-reliefs on boulders and hillocks (as seen in Kazhugumalai, Tirunelveli district); isolated statues (such as this 9th-10th century statue of Mahavir, discovered near Madurai in 2006). These sites uncover the different patterns of rise and downfall of the religion in the region, and also show continued occupation and influence.

According to historian R Champakalakshmi’s chapter in A Ghosh’s edited volume Jaina Art and Architecture stone beds in the natural caverns, which are often accompanied by Tamil Brahmi inscriptions, are proof of the early spread of Jainism. These caves were made habitable to accommodate Jaina ascetics. Some of these sites bear the earliest inscriptional records of the Brahmi script and the Tamil language. The same chapter describes some of the sites dating back to circa 2nd century BC to 2nd century AD. Champakalakshmi adds that these natural caverns later inspired rock-cut caves and may be considered precedents for innovations in religious architecture with the use of stone.

The hillock in Kazhugumalai is considered one of the most significant Jain sites in Tamil Nadu — there are 102 inscriptions referring to Jainism, the highest; a monolithic Siva temple that is often compared to the Ellora caves; and a large number of bas-reliefs of Tirthankars and yakshis — and has Tamil Brahmi inscriptions dating to circa 2nd-1st century BC as well as Jain art, vattezhutu inscriptions and other features of Jaina occupation dating to 8th-12th century AD. The site was once on an important trade route, had a Jain monastery, and perhaps even a thriving Tamil Jain community, although there is little sign of this now. The site is not, however, bereft of religious activity: sometime in the last century an Ayyanar temple cropped up right next to the Jain side of the hillock, a forceful appropriation of sacred space.

Having explained the “standard narrative” and also how existing Jaina heritage, such as Kazhugumalai, counters this narrative, it is important to look at the challenges in preserving this heritage.

First, there have been isolated cases of Jain sites and vestiges being “re-used”, after much remodelling, as Hindu sites or statues. The Ayyanar temple in Kazhugumalai only partially encroached on the Jain bas-reliefs, and the majority remain intact. However, Kazhugumalai has been protected by its status as one of the most important Jain sites and has over the last century evoked the interest of several British officers, the Indian state, and several academics. Other Jain sites are far less fortunate.

Second, many finds, such as stand-alone statues, are made during explorations, excavations and even by accident. Individual attention and protection for such sites has been arbitrary, ranging from State takeover/acquisition to reconsecration of the statues for usage in Jain temples to continued in situ worship. Documenting and conserving all the finds and “re-uses” in a systematic way is difficult given the limited resources and the random nature of such discoveries.

Third, as mentioned earlier, the small and scattered nature of the Tamil Jain population, and the limited agency it possesses have been detrimental to protection efforts. To give an example, between 1960 and 1980, 17 Jain temples were brought under the purview of the Hindu Religious and Charitable Endowments Department. To date, repeated requests and petitions from the community to release these temples to its charge have fallen on deaf ears.

The interaction of the Tamil Jains with their heritage constitutes an important facet as well. For instance, the Jain temple in Tiruparuttikundram was surrounded by a Tamil Jain settlement even until the first quarter of the 20th century. By the 1970s, the settlement had dwindled due to rural-urban migration. Today, there is just one Jain family living next to the temple. For many years the temple was neglected but it has recently been taken over and restored by the State Archeology Department, and now once again attracts large numbers of Tamil Jains and other visitors.

Fourth, many Jain sites are in areas that have rich stone deposits. From colonial records to news reports in the 20th century to a court ruling in the 21st century, all show that these sites have been appealing targets for mining and quarrying in spite of efforts to protect them. Even today, quarrying around ancient monuments is a major conservation issue in many parts of Tamil Naidu.

While these points summarise the many challenges faced in protecting Jain heritage in Tamil Nadu, from the extensive spread of the same it can be seen that the Tamil Jains were not just a passing phenomenon but an integral part of the history and culture of the region. Scholars have increasingly focused their attention on setting the record straight and busting the standard, simplistic and hegemonic narrative. There is a need to bring this nuanced understanding of heritage and history, and its interplay with contemporary communities and their identities, to the public. As EH Carr wrote in What is History?: “Our picture has been preselected and predetermined for us, not so much by accident as by people who were consciously or unconsciously imbued with a particular view and thought the facts which supported that view worth preserving.”

It is crucial that we widen our horizon and aim to include the historical evidence and minority voices for a more inclusive, layered and comprehensive picture of past and present.

This is the second of two South Asia @ LSE articles by Mahima Jain on the Tamil Jain community. Read her first piece ‘The Tamil Jains: A minority within a minority’ here.

Mahima A Jain is a Nehru Trust for the India Collection at the V&A UK Visiting Fellow (Jain Art) and Senior Sub Editor at The Hindu BusinessLine. Write to her at mhmajain@gmail.com or tweet @mahima_a. 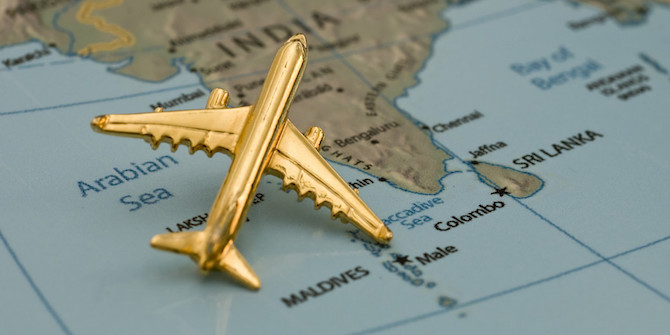 Bad Behavior has blocked 457 access attempts in the last 7 days.