On 10 May the Governor of the Reserve Bank of India gave a talk at LSE. He made the case for a new approach to global monetary policy that considers international responsibilities not just domestic mandates. The event was chaired by Professor Erik Berglof, Director of the LSE’s Institute of Global Affairs. Sonali Campion presents a summary of the event.

Last month, Dr Raghuram Rajan, Governor of the Reserve Bank of India, visited LSE to give the One Hundred Foot Journey Club’s inaugural lecture. The High Commissioner Mr Navtej Sarna opened the proceedings, warmly welcoming the 400-strong audience. He then introduced the Club, a collaboration between the South Asia Centre and the High Commission of India that aims to promote discussions between academics and policymakers on topical issues and research relating to India. Mr Sarna emphasised there could be no better person than Dr Rajan to speak at the first event because the Governor epitomises the application of academia: “he is as much a scholar as a pragmatic practitioner”.

Dr Rajan’s presentation focused on the need to construct a more effective global financial system. Recovery from the 2008 financial crisis has been uneven. We have seen differing growth rates among industrialised countries (ICs), among emerging markets (EMs) and between the two. While it is possible to go into the causes of each individual country’s problems, Dr Rajan argued there are common forces which affect all economies, because the world has proved to be more integrated than we previously thought. He questioned whether the reforms and regulations introduced to date were sufficiently addressing the headwinds to growth, and made the case for a new approach to monetary policy that considers international responsibilities, not just domestic mandates.

So what are these “headwinds to growth”? Dr Rajan presented a few possibilities, starting with the effects of debt. Citing research by Reinhart and Rogoff, he considered the possibility that growth, even before the crisis, was not sustainable, and was in fact fuelled by borrowing at household, government or corporate level. As a result the de-leveraging in the wake of the crisis has held some ICs back, while many EMs who had been less reliant on leveraging experienced knock-on effects as their sources of demand dried up.

Another growing issue is population aging. This is most obvious in Japan, but a growing concern in Europe, and China could even find itself grappling with the issue before it reaches the levels of wealth enjoyed by developed countries. This is a new challenge, so no one really knows what the impact on savings, investment or (already weakened) aggregate demand will be.

Productivity has also slowed. Despite the fact people and businesses are innovating to do things better, or more intelligently, using technology, Dr Rajan indicated that this is not showing up in productivity figures. He acknowledged this might be a measurement problem: GDP only measures monetised goods and services, and doesn’t recognise quality, creating a potentially misleading picture of growth.

However, the productivity slowdown could also be linked to responses to the crisis which resulted in an increase of “zombie firms”. Dr Rajan argued that a “good crisis” should clean up struggling industries, as only productive firms survive. However, if banks respond by flooding the system with liquidity, these firms might stagger on, inefficient but not dead, possibly diverting capital from new ventures with greater potential. Alternatively, the slowdown might be associated with changes in the structure of industry, which has led to the creation of more oligopolistic industries. As they dominate the market, these risk becoming inefficient and under producing.

Can we respond more effectively?

So far, responses do not seem to be considering the “common forces” that might be at play. Instead the prevailing view of the IMF, G20 and others is that with enough fiscal stimulus, the global economy will get back on track. But Dr Rajan asked, can we do better? Are there questions we should be asking ourselves that would allow us not just to right the system but to strengthen it?

If so, one pertinent question would be: are there structural reforms that could benefit from international discussion? Dr Rajan highlighted the example of tax avoidance where the G20, in particular, is already trying to get the international community to cooperate. If one country cracks down, tax-avoiding corporations might move elsewhere, but a coordinated effort could have real impact. Are there other areas this could work, perhaps to challenge the oligopolistic companies?

Another question the Governor raised was whether banking regulation has gone too far, or resulted in new and unintended risks. Regulation was undoubtedly necessary, and the changes have certainly strengthened the banks. However, Dr Rajan suggested this is resulting in weaknesses elsewhere. For example, there is evidence that banks are backing off from investing in small and medium enterprises (SMEs) and in EMs more generally. Although these are arguably riskier activities, such investments have the potential to contribute to both national and global growth and therefore should be encouraged.

A third issue is the unintended consequences of monetary policy, and whether cutting interest rates has actually been effective at driving demand. At the moment, it seems that savings rates are the same as they were pre-crisis, if not higher. Dr Rajan suggested that this could be because rather than spending, people are responding to lower interest rates by saving more, for fear of not being able to save enough, e.g. for retirement. He indicated that in general, unconventional monetary policies designed to drive demand may be having the opposite effect because the public are not sure what to expect and become more cautious as a result. What is more, there is growing evidence that these policies have spillover effects which affect other countries, and more often than not, the emerging markets.

Moving beyond the domestic mandate

Alongside other key players representing emerging markets, Dr Rajan has been arguing there are consequences for the rest of the world from the aggressive monetary policies adopted by individual nations. He stressed that if a policy does little domestically, but does harm elsewhere, its use should be restricted.

He acknowledged that this approach immediately comes up against a problem: “across the world central bankers have a domestic mandate. There is nothing that says ‘think about the rest of the world’”. Currently, policies that have a negative impact on others will only be acknowledged or adjusted if they produces unwanted consequences for the country that introduced them. This is not enough to protect the rest of the world.

In this light, Dr Rajan called for extensive academic research into the net spillover effects of monetary policies, with the end goal of establishing new rules of the game on international responsibility. He argued that analysis could produce a traffic light labelling system for policies: green for those which would have a net positive effect on the global economy in the long term, orange for those which might have negative impacts in the short term but positive long-term effects, and red for those with predominantly negative spillover effects. In this way the use of damaging monetary policies could be limited.

As he concluded, Rajan quipped that the first reaction to his proposal was always “this is guy from an emerging market with no international responsibilities telling us what to do!” But he continued:

“The answer is, by the time any of this actually gets made into policy I have no doubt that India will be one of the top five global economies…so we will be subject to this kind of discipline. It is time we started discussing, because today there is a lot of angst about the monetary policies that other countries are following, but never any direct confrontation because those policies are always seen as OK due to the domestic mandate”.

Catch up with Raghuram Rajan’s speech in full with the video/podcast, available here. You can also find the Storify here. 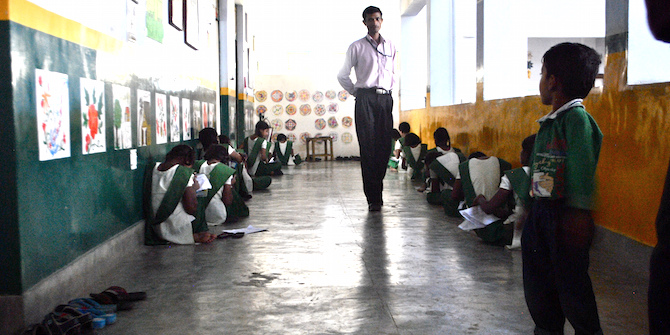 Bad Behavior has blocked 3674 access attempts in the last 7 days.