With less than a week to go until the US Presidential Election, Eviane Cheng Leidig looks at why Donald Trump has such a significant following among Hindus living in America. She writes that the Republican candidate’s support for entrepreneurial success and celebration of Indian PM Modi as a role model, as well as his tough stance on illegal immigration and ‘radical Islamic terrorism’ chimes with many who hold Hindu nationalist sympathies.

One strange US election fact is becoming clear: Donald Trump has become the favoured presidential candidate of some American Hindus. How and why are more complex questions.

In June, I wrote about a small gathering of the Hindu Sena (Hindu Army) in Delhi performing a havan puja (religious offering) to Donald Trump. The erstwhile relatively unknown group attracted widespread media attention with its highly vocalised support of the Republican presidential candidate, in particular emphasising Trump’s views on combating “Islamic terrorism”.

While the Hindu Sena remains a fringe phenomenon within India, I pointed then to the growing influence of Hindus for Trump, a small movement based in the US.

The emergence of Trump support among some Hindus makes sense. As the newest “model minority”, Indian Americans enjoy high socioeconomic status. This was originally due to a specific US immigration policy that encouraged highly skilled labour from India. And although roughly half of Indian Americans are Hindus who mostly lean towards the Democratic Party, there are prominent members of the diaspora, particularly in the US and UK, who are strong proponents of key issues on Trump’s platform.

At the event, Trump stressed entrepreneurial success, both in India and among American Hindus. The candidate described how “[Hindu] values of hard work, education, and enterprise” have contributed to US society. Trump also promoted core Republican principles of lower taxes, especially for small businesses, in order to benefit middle-class families.

Hindus constitute one of the most educated demographics and hold one of the highest average household incomes in the US. And Trump’s appeal to neoliberal conservative values strongly resonates with this demographic.

More significantly, he referred to Indian Prime Minister Narendra Modi’s economic schemes as a model for the US, prompting much applause.

Launched in 2014, Modi’s Make In India initiative spurs job creation by encouraging foreign direct investment. It eliminates tax regulations and bureaucratic red tape in order to create more business-friendly sectors, particularly in manufacturing and production. Its aim is to cultivate India as a 21st-century economic powerhouse.

For many American Hindus, Trump’s vision to “Make America Great Again” relies on similarly favourable neoliberal policies. By projecting the myth of the American Dream, Trump attracts an audience beyond his core voters by embodying American capitalist ideals.

Illegal immigration and the wall

Trump also received applause for his call to build a wall on the US-Mexico border, which echoes similar proposals by right-wing Hindu nationalists to build a wall along the India-Bangladesh border.

Described as India’s “Mexican problem”, the arrival of low-wage Bangladeshi migrant labourers to Indian cities is often portrayed in terms of illegal immigrants threatening local (that is, Hindu) jobs, despite much larger migratory flows from Bangladesh to the Arab Gulf states and Southeast Asia.

Indian-American Republican politician and endorser of Trump, Bobby Jindal, best exemplifies these views with his message that “immigration without assimilation is invasion”, and likewise strongly advocates for a wall to be built on the US-Mexico border.

Trump praises India’s role in fighting “radical Islamic terrorism”. Although discourse of Islamist extremism in the West centres on the Islamic State and jihadism, in his speech to American Hindus, in his speech, Trump praised India’s foreign policy relations with Pakistan.

By doing so, Trump strikes at the heart of the Hindu nationalist narrative: anti-Muslim anxiety, where Islam is viewed as a foreign threat to Indian security. Since partition of India and Pakistan in 1947, Muslims have constituted 14% of India’s total population (approximately 172 million people), and represent the country’s second largest religion.

Yet, their minority status has been continuously undermined by Hindu nationalists as “anti-national”, ultimately reinforcing the idea that India is a Hindu nation and Pakistan a Muslim one. The aforementioned Bangladeshi migrant workers are also stigmatised for promoting Islamist activities.

Stories of such “radicalised” migrants have prompted reactionary responses to increase border security with the Muslim majority nation.

Anti-Muslim prejudice on the subcontinent towards Pakistanis and Bangladeshis has carried over in the form of Islamophobic views in post-9/11 America. Although the younger generation of American Hindus are challenging this divide and attempting to build solidarity across all forms of racial and religious discrimination, there is a sizeable cohort that continues to hold negative stereotypes.

Lastly, Trump calls out on “crooked Hillary” with her links to the “politically correct” establishment. A recent anti-establishment wave has been well documented in global politics, but there is something distinctly familiar about Trump’s platform that resonates with Hindu supporters.

By describing Modi as a role model “who has been very energetic in reforming India’s bureaucracy”, Trump signals his appreciation of the Indian prime minister’s initiative to root out corruption.

Modi’s 2014 campaign was an overwhelming success due largely to his cultivated persona as an anti-establishment figure. The son of a chai wallah (tea seller), Modi is an inspiration that outsiders can affect change.

Prior to his assuming office, the incumbent National Congress Party had dominated India’s political landscape since independence. Many of the electorate desired a fresh perspective that came with the charismatic Modi.

At the RHC event, a poster surfaced that showed Hillary Clinton, with devil horns, as being in cahoots with Congress leader Sonia Gandhi to eliminate Modi in a “witch hunt”.

Hindus for Trump best exemplifies how Hindutva (“Hindu-ness”) operates as an ideological phenomenon that affects the Indian diaspora.

Adopted by Modi’s Bharatiya Janata Party as its official ideology, Hindutva provides the theoretical grounding for Hindu nationalist projects both in India and abroad. The Hindutva movement within the diaspora contributes key financial support to affiliate organisations in India.

What the current US election cycle displays is a development in American Hindu identity that centres on distinct frames of belonging. We need to recognise how this will create a deeply transformative effect in politics, both in the US and back in India.

Eviane Cheng Leidig is a PhD candidate at the Center for Research on Extremism, University of Oslo. She tweets @evianeleidig. 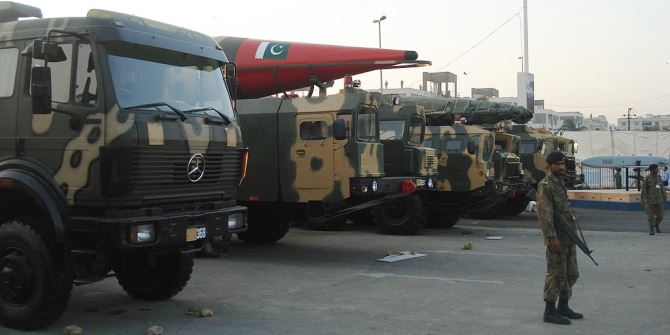 Analysing the economic impact of military expenditure in Pakistan