Globalisation and trends towards federalism have created increasing scope for paradiplomacy. In this article, Harsh V. Pant and Falguni Tewari discuss the opportunities that sub-national international relations could create for a number of Indian states and the challenges that paradiplomacy poses for the central government.

This post builds on a previous article Paradiplomacy: Can India learn from China?

While the Modi government can be credited for bringing paradiplomacy to the center stage of Indian policymaking, the idea of international relations being forged at the subnational level is not a new one. With the growing policymaking capacity of sub-state entities, paradiplomacy can be employed by states, provinces and even cities both in federal as well as unitary states for solving diplomatic issues.

Paradiplomacy can be employed with a variety of aims which can range from bringing in a decentralised dimension to international debates to internationalisation of domestic issues by bringing regional issues on the global stage, promoting trade, tourism, cultural ties and even post-conflict reconciliation to local political activism being sought for international support. Subnational relations can also be conducted to promote and attract investments seeking region-specific economic advantages.

In more ways than one, paradiplomacy owes its origins to globalisation. As the world economy has become increasingly global and increasingly integrated in a variety of ways, sub-national units (regions, states, provinces and even cities) find their functions and activities circumscribed by the global system. Federalism is also a key contributor to the growth of paradiplomacy. Sub-national actors such as states and provinces which have a formal legal personality are necessarily more likely to engage in international activities designed to promote and protect local and international interests and prerogatives. The case of Sao Paolo is particularly interesting in this context.

São Paolo as an exemplar

São Paulo in recent years has drawn international attention for its aggressive and successful efforts at “city diplomacy”. With support from Brazil’s Ministry of Foreign Affairs, the São Paulo state government passed a decree in 2012 adopting its own plan for conducting international relations. The plan’s 54 goals included foreign investment and loan targets and ways to boost foreign-language education. The state has become one of the few federated states in the world to establish clear guidelines on how to act externally.

The sprawling metropolis has over 50 consulates – the second largest consular corps in the world behind New York City, while capital Brasilia hosts 100 embassies. In 2013, the State of São Paulo became the first subnational government in the Southern Hemisphere to sign direct bilateral agreements with the United States and Britain. Since then it has signed more international agreements (50 per year), received more foreign delegations (on average 450 per year), and managed more international cooperation programmes (150) than any other regional governor in Latin America. It is second among the top Foreign Direct Investment (FDI) destinations in the Americas, closely following New York.

The distribution of legislative powers between the Union and states in India is quite explicit. A threefold distribution of legislative powers between the two (Art 246) is envisaged in the Indian Constitution. Foreign affairs, diplomatic, consular and trade representation, participation in international conferences, entering into treaties and agreements with foreign countries and implementation of treaties, agreements, and conventions with foreign countries, foreign jurisdiction and trade and commerce with foreign countries, import and export are the areas where only the Union government is competent to legislate.

In this context, the federalisation of foreign policy is a development of significant import. First, as globalisation has eroded traditional boundaries, the Central government by itself is not well-equipped to meet the challenges posed by new political, economic and social forces. It is here that subnational involvement in international affairs can help push forward India’s stand on key issues. In a country as sizeable as India (a subcontinent), there is a definitive need for decentralisation of foreign policy implementation and in selected areas of diplomacy. Second, it can be argued that states are often better equipped than the Central government to undertake diplomatic measures in areas of trade, commerce, foreign direct investment, education, cultural exchanges and also outsourcing of business.

Another factor that brings the importance of paradiplomacy to the surface is that there might be cases where the Central government will differ with state governments on ideological and political grounds, which makes it likely that some judgments of New Delhi may not be viewed in the best interest of states and vice versa. In addition, given India’s size, provincial governments are often better placed to enhance diplomatic relations with other governments in their neighbourhood because of geographical, cultural, historical and economic reasons. For instance, West Bengal can have more successful paradiplomatic relations with Bangladesh and Bhutan than an MEA official stationed at the country’s capital. Similarly, Kerala has vested interests in engaging in diplomatic relations with the Gulf countries as a large number of the state’s residents find jobs in those countries.

In recent years, the term ‘city diplomacy’ has gained increased usage and acceptance, particularly as a strand, if not a variant, of paradiplomacy and public diplomacy. Town twinning, as it’s more commonly called, is a concept where cities develop their own foreign relations based on cooperative agreements. These pairings can be conducted for cultural or economic exchanges, which, in turn are beneficial to both cities/towns. While such city-to-city relationship or the twinning model is not entirely new to India, there is a need for India to substantially increase its engagements with other nations at the subnational level.

Paradiplomacy has the potential to not only strengthen the federal structure of the Indian state but also radically alter the trajectory of Indian foreign policy by helping regional governments to realise their potential in the conduct of cross border relations.

An important factor giving paradiplomacy an upper hand over regular diplomacy being conducted from the core is that it makes space for issues to be addressed keeping local sentiments in mind. A case in point is that of fishermen from Tamil Nadu arguing for fishing rights in what are disputed waters for Sri Lanka, citing historical and traditional rights, while Sri Lanka is unsympathetic to the cause and retaliates sternly to any such claims. It is here that bilateral relations being conducted between states could help more than negotiations that are held at the Central level. A local involvement of the Tamil Nadu government will be more prudent in tackling issues related to not just fishing rights for residents but also of reservations and/or remittances for refugees, and human trafficking. Sri Lanka’s Tamil population remains sympathetic to the Tamil cause, thus, making it almost compulsory for any relations to be dependent on the Tamil government’s involvement and attitude. A reconciliation committee or maybe an involvement of few officials from states is crucial to avoid embarrassments similar to India’s vote against Sri Lanka in the UNHCR and a subsequent ban of Sri Lankan cricket players on the Indian soil.

Similarly, West Bengal might be better placed to enhance diplomatic relations with governments in its neighbourhood (Bangladesh and Bhutan) given its geographical and historical ties with the countries. In addition to improving bilateral relations between their common Bengali diaspora, Bengal and Bangladesh can also potentially reinforce their ties over issues of water sharing, inland water trade and also address problems of illegal infiltration.When looking at the scope of good relations between countries and federal states, one can then also analyse the role that India can play by providing port facilities, medical tourism and also shared international airports to a land locked country like Bhutan.

Ties with bordering countries are not always a cause of contention and this is evident in the case of Kerala where nearly 5 million Keralites serving in the Gulf and other foreign countries, makes the economy of the state heavily dependent on non-resident Keralites working outside its borders. Thus, there arises a need to establish consular offices of the government of Kerala in these Gulf countries and even others, if needed. The geographical and strategic positioning of Kerala on the old sea trade route advantages the cause of paradiplomacy as increasing trade and commerce in the area could revive its old prominence. Owing to Kerala’s high literacy and good health services, even medical tourism in the state is bound to see a boost with the use of constituent diplomacy. Male’s dependence upon supplies from Kerala could also be used to India’s advantage.

Hosting the Global Investor’s Summit held biennially in Gujarat, the state has been able to showcase itself as the ideal investment destination in India. The global summit called Vibrant Gujarat earned Gujarat not just an enthused participation and acknowledgement from foreign dignitaries but also opened the floor for prospective investors to explore opportunities to indulge in business activities. It is undeniable that Gujarat, through its subnational engagements has increasingly attracted not just economic investments but is also now paving the way for cooperation on sustainable development – a cause which countries across the globe hold close to their hearts. Gujarat has been able to substantially add to the nation’s larger interests by working on economic diplomacy at the federal level.

While paradiplomacy throws up fresh challenges for the Indian government, the involvement of state governments in the domain of foreign policy certainly addresses the issue in greater depth. The Centre needs to come up with effective institutional mechanisms to introduce paradiplomacy in the country. While one way of doing this is through the creation of consulates or consular offices in individual states, another way of bringing paradiplomacy to see the day’s light is through the setting up of federal foreign affairs offices under the supervision of the MEA. To this end, officers stationed at these regional offices can be trained to better handle security issues and can also be groomed to work to take the Centre’s goals forward and not work against the national good. Thus, better coordination between the MEA and local offices by means of regular consultations and bureaucratic interactions is effective in taking the goal of paradiplomacy forward. The Centre, at a later stage, could also take steps to introduce formal legislations acknowledging the essence of paradiplomacy and its implementation in various states. The Union government could then formalise the legislations post overall monitoring in order to push forward India’s stand on key issues of global importance.

This article originally appeared on the ORF blog and is reposted with permission. It gives the views of the author, and not the position of the South Asia @ LSE blog, nor of the London School of Economics. Please read our comments policy before posting.

Harsh V Pant is presently Distinguished Fellow and Head of Strategic Studies at Observer Research Foundation, New Delhi. He holds a joint appointment with the Department of Defence Studies and King’s India Institute as Professor of International Relations.

His current research is focused on Asian security issues. His most recent books include The US Pivot and Indian Foreign Policy (Palgrave Macmillan), Handbook of Indian Defence Policy (Routledge), and The US-India Nuclear Pact: Policy, Process and Great Power Politics (Oxford University Press).

Falguni Tewari is a Research Assistant at the Centre for Strategic Studies at Observer Research Foundation, New Delhi. She recently completed her Masters in International Relations at LSE. 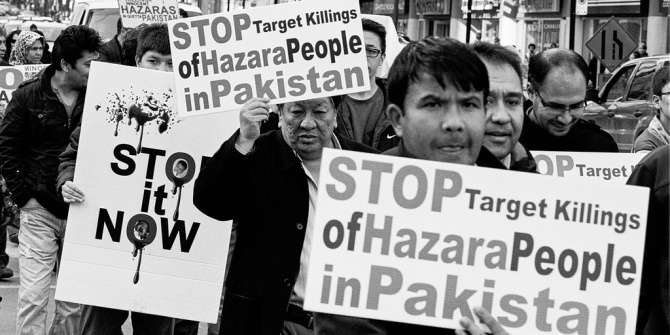