Army and Nation draws on a wealth of data to explore how and why India has succeeded in keeping the military out of politics, when so many others failed. Pratinav Anil finds that Wilkinson makes a convincing case for why India’s democracy survived while Pakistan experienced a series of military regimes. He deems it an essential read for those interested in the postcolonial histories of the two South Asian countries.

Army and Nation: The Military and Indian Democracy Since Independence. Steven I. Wilkinson. Harvard University Press. 2015. 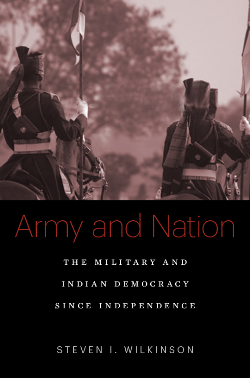 Books about India and Pakistan, in recent years, have shifted their attention from the convergence to the divergence in the political trajectories of the two countries. In 1995 Ayesha Jalal argued, and many agreed, that India’s ‘formal’ democracy was veering toward authoritarian centralisation, while Pakistan’s authoritarianism was inching toward democracy. But the turn of the century heralded in India a technocratic liberalisation of the economy, high growth rates, moderately stable coalition politics, and an interest in global politics, while in Pakistan experienced its third coup d’état, suffered a number of high profile assassinations, irked its international allies, and battled a growing threat of militants and terrorists on its soil. Academics, journalists, and the popular press shifted toward exploring the differences between the two countries.

Philip Oldenburg in India, Pakistan, and Democracy (2010) suggests that Pakistan lost the plot because the Muslim League (the leading party of the postcolonial state in the forties and fifties) failed to reign in its historical bequeathals—the military establishment and the Indian Civil Service, while its Indian counterpart, the Indian National Congress, did. Christine Fair in Fighting to the End (2013) points to an unhealthy revisionism of the Pakistan Army, by far the most dominant force in the running of the state, that regularly imperils the country’s interests through the sponsorship of Islamist proxies and sectarian violence. Recently, Myra MacDonald came to the same conclusion in Defeat is an Orphan (2016)—in its competition with India, Pakistan has sacrificed domestic stability for a failed set of objectives: control of Kashmir, influence over Afghanistan, and parity with India. Like these works, Steven Wilkinson’s Army and Nation looks at the question of divergence, while also presenting an innovative analysis of civil-military relations in postcolonial India and Pakistan.

Wilkinson’s premise rests on the empirical observation that decolonised states often have a high incidence of coups d’état. This is because colonial states usually relied on local armies drafted largely from minorities within the local populations they were ruling because this accorded cohesion, but no ‘fellow feeling with those they might be ordered to fire upon.’ In the wake of independence, a power struggle would ensue between a majority-controlled political leadership and a minority-controlled military. The latter prevailed through coups in Burma, Ghana, Iraq, Nigeria, Sierra Leone, Syria, Togo, and a number of other countries. Pakistan, which ostensibly shared the same political inheritance as India, experienced coups in 1958, 1977, and 1999, while India bucked the trend. In his five chapters on the place of Indian army within the country from the mid-nineteenth century to the present—and a sixth on the role of Pakistan’s army in the postcolonial state—Wilkinson investigates this divergence, concluding that India’s coup-proofing strategies and federal institutions were instrumental in solving the eponymous question of ‘army and nation.’

In his phenomenology of civil-military relations, Wilkinson argues that coup-proofing was no accident. Prime Minister Jawaharlal Nehru’s calibrated thinking, coupled with a general distrust within the Indian National Congress leadership, who had often suffered at the hands of the armed forces in the run up to independence, were central to a number of decisions made by the cabinet and constituent assembly of the nascent republic. In 1947 the Commander-in-Chief was removed from the governor-general’s executive council and made responsible to the Defence Minister. Eight years later, the position was entirely done away with, and replaced by a downgraded Chief of Army Staff and made equal to the chiefs of navy and air force, increasing the scope of interservice rivalry. A man who understood optics, Nehru personally took over the Commander-in-Chief’s mansion as his official residence, and limited the wearing of uniforms in public. Extension of tenure became impossible for senior generals; army chiefs were often sent on extended diplomatic postings in faraway Canada, Cyprus, and Australia; the military’s domestic intelligence functions were transferred to the Home Ministry’s Intelligence Bureau, which surveilled retired officers and tapped phones; the traditional recruiting streams, training academies, and mid-career training institutions were diversified to decrease cohesion.

In addressing the ethnic imbalance between the armed forces and the civilian population, Wilkinson notes that India more or less continued the policy of recruiting from what the British had called ‘martial races’—race science was in vogue during the late nineteenth century—such as the Sikhs, Gurkhas, and Dogras, while publicly distancing itself from it through token gestures like the recruiting from ‘military deficit’ provinces in small numbers and largely non-combat roles. More significantly, a policy of ‘balancing inside the army’ was adopted— variegated companies within each battalion prevented soldiers from forming common ground on the basis of a shared identity, for example, a typical Punjab Regiment battalion was made to consist two Sikh and two Dogra companies. Parallel to this, the Indian state pursued a policy of ‘balancing outside the army’—vast paramilitary forces totalling over 850,000 served as an indirect hedge against the army. Unlike the paramilitaries, the army was never given domestic functions for fear of politicisation. A natural balancing also occurred with Partition, which left Pakistan with a larger number of ‘martial’ regions—West Punjab and North West Frontier Province—while India inherited a less homogenous, less Punjab-centric army.

India’s federalism helped prevent violent conflicts that could have easily slid into coup attempts like those in Pakistan, where civilian misrule served as the usual pretext for military takeover. By preventing religion-based reservations, and by acquiescing to a multiplicity of ‘cross-cutting cleavages’—that is, conflicts based on linguistic, ethnic, and regional identities—India managed to prevent religion from evolving into a macrocleavage that could lead to conflict, instability, and the threat of military coups. In contrast, Pakistan imposed Urdu on a population that barely spoke it, and built a state upon the macrocleavage of religion—with the adoption of the 1956 constitution, Pakistan declared itself the Islamic Republic of Pakistan. The Muslim League’s lack of legitimacy and institutionalisation in the territory that became Pakistan—émigrés from India accounted for most of the party elite—also made it harder to rein in the army, engage in coup-proofing strategies, and enjoy the trust of the local population.

In his panoramic view of civil-military relations that covers two countries and 150 years, Wilkinson makes a convincing case in explaining the longevity of India’s democracy and Pakistan’s recurrent military regimes. Army and Nation draws on a wealth of material including army reports, interview transcripts, archives from a dozen different institutions, and presents them with ambition and clarity. An essential read for those interested in the postcolonial histories of the two South Asian countries.

Pratinav Anil is currently pursuing a Masters in International Relations at the London School of Economics (LSE). He has previously written for The Indian Express and The London Globalist, and is presently working on a project on the Emergency (1975-1977).