At the LSE Pakistan Summit 2017 David Gilmartin gave a talk on ‘The Indus and its Peoples’. Afterwards, Sonali Campion asked him to elaborate on some of the themes raised, from the division of the river basin during Partition and the 1960 Indus Waters Treaty, to the inter- and intra-national tensions that have played out since 1947.

SC: Tell me about your book on the Indus Basin.

DG: I published a book in 2015 called Blood and Water: The Indus River Basin in Modern History. It is a study of the politics of irrigation going back to the late 18th century then follows the big transformations brought by British irrigation projects from the late 19th century, examining in particular the politics associated with these works. By that I mean the politics of the colonial administration and the assumptions that lay behind the engineering view of controlling the Indus Basin, and the manipulation of local and tribal identities. The book then traces the story through Partition in 1947 and focuses on the impact the division has on the Indus Basin and its waters. It looks at what happens on the Indian side and what happened on the Pakistani side, bringing the story more or less up to the present.

How did Partition disrupt the integrated system the British had created?

The Radcliffe line through the Punjab cut right across not only the rivers of the Indus basin, but across several canal systems as well. It also disrupted the ideologies of power and of rule associated with control over the river basin. One chapter in the book focuses on the ways that both the Indian and the Pakistani governments attempted to reclaim a tradition of authority linked to control over the river basin, even as they had to deal with its physical division. That story continues through the negotiations that led to the Indus Basin Treaty of 1960 which were mediated by the World Bank, and the major changes in the organisation of irrigation that followed that. In fact, there was a big expansion of irrigation on both sides of the border, but with a variety of political and environmental consequences.

And how did the development of water management on both sides of the border cause inter-state as well as centre-state tensions?

The conflict over water in the Indus Basin after Partition is often made out to be largely between between India and Pakistan, with India being the upper riparian and Pakistan being the lower riparian. There is a story of considerable conflict and negotiation leading ultimately to the treaty, but what I argue is that in fact some of the major tensions that drove these negotiations were between the new central governments on both sides of the border and the provinces that were involved. Particularly on the Indian side, the struggle between the new east Punjab province and the centre under Nehru is one of the driving forces in shaping how India dealt with the waters on their side of the border after Partition. This involved big debates over how water was going to be distributed between the provinces, and there has had a lasting legacy right up to the present, which can be seen on the Pakistani side too.

One of the big moments in the history of irrigation was when water flowing across the border was stopped on the Indian side in April 1948. This gave rise to a major effort by Pakistan to begin to reclaim and remake the water on their side. But it is a very interesting story because on the Indian side, the stoppage was not really an act dictated by Nehru and the central government, it was primarily an act of the east Punjab government. Nehru was quite upset at what had happened and rebuked the east Punjab government, but in dealing with Pakistan he also tried to present a kind of united front. The Pakistanis for their part – even though they were fully aware that a lot of this was coming from east Punjab – nevertheless saw this as an Indian act which warranted mobilisation.  This was a key moment in which new visions of control over the environment after Partition really shake the way new political orders are being created on opposite sides of the border, in part justified and legitimised by claims to control over water and over nature.

The control of water discussion is interesting because the people who get to decide where the canals go are very powerful in these situations.

Absolutely. But having said that, there is a continuing tension on both sides of the border between what one might call an ‘engineering view’ of water control, e.g. around canal building and canal placement, and a political view. They sometimes coincide and sometimes do not coincide. For example, when Ayyub Khan took power on the Pakistan side, the kind of technical engineering vision of control over the river basin is embraced by the government as a claim to an apolitical justification for rule which is reflective of the authoritarian shift. The politics around water control is an ongoing story which goes back to the 19th century and runs right up to the present.

What were the factors that made the Indus Basin Treaty possible, and how robust is it today?

A number of people have written on this, but it is still an interesting story with lots of different, sometimes conflicting storylines. The original development of the negotiations in the early 1950s and the entrance of the World Bank as a mediator, dated back to a visit to India by David Lilienthal who was the chief administrator of the Tennessee Valley Authority in the United States. He saw the model of scientific, apolitical control over nature as something which would good for humanity, and one which could be used in South Asia to settle the water question.

The original impetus to these negotiations was to try to maintain a vision of the river basin as a unified natural entity, to justify some development of structures of cooperation and control between India and Pakistan. Within a few years it became increasingly clear to the Bank that this was going to be impossible. In 1954 it therefore came up with this proposed formula which moved away from cooperative control and emphasised separating the waters into two spheres of control: India was given the three eastern rivers, Pakistan got the three western rivers.  Although there were a few institutions of cooperation involved, the solution basically created independent fields of operation. There were also other incentives: Pakistan was compensated by a huge foreign funding package to create new works to make up for the losses from the eastern rivers.

That framework still has considerable vitality because from the perspective of both Pakistan and India, it creates a kind of arena of national sovereignty, through which they can control their own side of the river basin. It continues to function but there have been increasing challenges in recent years for a variety of reasons. One is simply the shortages of water are growing increasingly severe and this creates huge pressure, particularly on the Indian side to make use of the western rivers, which in the case of the Jhelum and Chenab flow through Kashmir.

However, it goes beyond that. Part of the problem is that Kashmir was largely excluded in the calculations that prompted the original treaty – there was a certain amount of water allocated to Kashmir from the eastern rivers on the Indian side but it was very limited. Now this is a growing issue and the question is, is India interested in making more use of these waters that flow through Indian territory? Under the treaty, they are allowed to use them in certain limited ways but Pakistan is very suspicious of these new projects on the Chenab and Jhelum rivers. There are mechanisms for arbitration of these issues but the level of suspicion and conflict around the treaty and its operation can escalate quickly. The basic logic of the treaty does carry significant weight but it is hard to say more than that on what’s going to happen in the future.

Professor David Gilmartin will be speaking at LSE in December on ‘Pakistan and the Grand Narratives of 20th Century History’ as part of a series of events to mark 70 years of the Indian subcontinent’s independence from Britain. View all the events here.

Dr David Gilmartin is Professor of History at North Carolina State University. His research focuses on the intersection between history and imperialism in South Asia; he is currently working on the legal inheritances of India’s electoral institutions from colonial times, and their concomitant visions of sovereignty. His most recent publication is Blood and Water: The Indus River Basin in Modern History (2015). 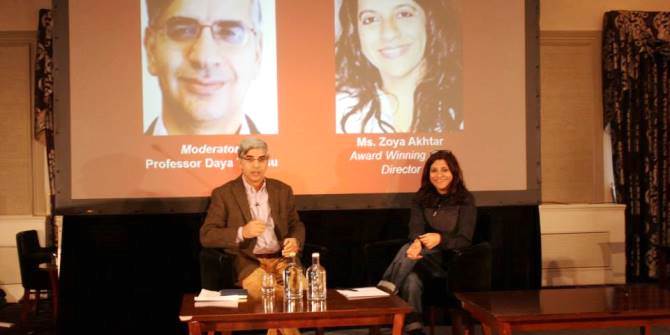 Bad Behavior has blocked 2967 access attempts in the last 7 days.