The earthquake and aftershocks that hit Nepal in April-May 2015 had a devastating impact on the Kathmandu Valley. National and international donors responded with both cash and material assistance, but there has been relatively little research into aid effectiveness. Here Srijana Nepal, Neha Uprety and Apekshya Prasai discuss their recent fieldwork exploring the gendered outcomes of cash transfers and the challenges that arose conducting qualitative research in earthquake-affected communities.

Two years on from the massive earthquake in Nepal, which killed thousands and impacted countless more homes and livelihoods, people are still rebuilding their lives, helped in part by support from both national and international humanitarian organisations. This support has included building temporary shelters, executing cash for work programmes, relief distributions and cash transfers.

It is within this context that Social Development Direct (SDDirect) and the Nepal Peacebuilding Initiative (NPI) undertook research to understand the impact, if any, of this government and humanitarian support through cash transfers on gender equality and women’s economic empowerment. In total, we interviewed 36 women, conducted two household case studies and eight focus group discussions (four with women and four with men). In this article we discuss our experiences of undertaking qualitative research in post-earthquake Nepal.

Aware that both rural and urban areas were severely impacted by the earthquake, we chose to focus on urban Nepal because of the distinctive gendered dimensions of cash-based urban economies and the increasing use of cash and voucher aid programming in urban humanitarian contexts. We therefore conducted research in two earthquake affected sites: Kirtipur, an urban area seven kilometers south west of Kathmandu Metropolitan City, and Bungamati, a peri-urban area 11 kilometers from Kathmandu. These locations were selected based on the severity of damage to homes and the extent to which cash and voucher aid programmes had been carried out. A list prepared by the government stated that of the 19,441 households in Kirtipur, 3700 were badly damaged and 2600 households completely collapsed. In Bungmati, of the 1304 houses in the community 989 households were badly damaged and 263 households partially damaged.

For many researchers, asking a series of questions to get people to share their experiences in the aftermath of a disaster can be a daunting challenge. In our case, this was made more challenging by the fact that some interviewees had received little or no in-kind or financial support following the earthquake.

A primary challenge for us in carrying out our interviews and focus group discussions was managing their expectations around receiving tangible benefits for sharing their experiences with us. Our interviewees often expected some form of financial assistance from us – from providing direct cash or links to a donors; to providing support in getting the money promised by the government or helping to secure loans from the bank or individuals. An example comes from a woman we interviewed who asked if we could arrange a NPR 200,000 loan for her at a low interest rate.

There were also instances where we were repeatedly asked if we could provide access to basic goods and services (such as water pumps due to the scarcity of water in the valley following the earthquake) or else run skill development or income-generating trainings. Some of the women we interviewed also requested assistance in finding home-based work, work that was easily accessible to their homes or longer term cash for work programmes. It comes as no surprise then that in many cases interviewees were disappointed at not receiving anything from us in return for sharing their experiences, especially as they frequently expressed frustration at the many NGOs and INGOs that keep coming to their community without making any real changes.

In all cases we were disheartened by our inability to assist respondents whose current living conditions were dire as a result of the earthquake, and who still found time in their busy daily routines to speak with us. However, we dealt with these situations by explaining the importance of generating evidence, such as women’s experiences of managing their care work and paid work following the earthquake to make visible the importance of women’s specific contributions for programming and policy making; or the ways in which the information they shared would enable us to provide concrete recommendations to organisations and the government to take necessary steps for women’s economic empowerment and design programmes accordingly.

Despite many efforts and involvement from development agencies in the communities we visited, the participants often viewed us with suspicion. We were at times perceived as being involved in ‘dollar making business’ (communities often view NGO/INGO as a business hub) and there only for our own benefits.

Men and women who had not received cash transfers from the government or other organisations were often the most reluctant to engage in any conversation around the impact of emergency cash. This is reflected in Kirtipur where we barely managed to get five men for our focus group discussions with male non-beneficiaries – and that too only after our local contact in the community had worked hard to persuade them.

Many of the non-beneficiaries expressed dissatisfaction and anger at not receiving emergency cash transfers, with several complaining about political interference in the distribution of cash: “you tell me, is it fair that I did not get money despite being in such great need?” one of them asked. This put us in an uncomfortable position as we had to remain neutral, while they hoped we would take their side. That said, there were some non-beneficiaries who asserted that they believed others in the community had a greater need for the cash and were therefore less resentful.

We undertook the fieldwork between December and January, i.e. in the depths of winter. Most of the women we interviewed were living in temporary shelters or semi-demolished houses that were very cold so many women insisted on talking out in the sunshine. Furthermore,  since all the women we interviewed did some sort of paid and unpaid work they also had busy schedules and some preferred to talk to us while completing other tasks. As a result, we had to conduct many of our interviews in public spaces: an elderly woman in Kirtipur insisted that we conduct the second half of the interview in her work shop so she could weave. Another had to go to work in the fields right after the interview and wanted to wash dishes as she talked to us.

While we wanted to avoid disrupting their routines, conducting interviews in spaces without much privacy was often problematic as friends and relatives would stop by and listen to parts of the conversation, often interrupting the conversation to offer their own opinions. For example, during an interview with a female beneficiary about her household responsibilities, her friend interrupted and started talking about the difficulties she also faces in the community and in her family as a woman.  As this disrupted the flow of the interview and distracted the interviewee we had to pause until the passersby left each time this happened.

Much harder were the cases where interviews were done in homes while the interviewee’s husband was present. We worked hard to be tactful and respectful in requesting for privacy without affecting the dynamics of the household. However, where husbands insisted on being a part of the interview (or hovered around to listen to what their wives had to say) we only questioned women on their experiences of the emergency transfer, steering clear of more sensitive questions around paid/unpaid care responsibilities, gendered division of labour, and decision-making until the husbands had left. In one case, when we were interviewing a Tamang female non-beneficiary in Bungamati, her husband kept making comments in the background about how supportive he was and how he shared household responsibilities.

However, in most cases explaining the nature of our research and why it was important to talk to women separately was enough. We also invited a few husbands for focus group discussion to put forward their views and this was helpful as it gave them a forum to voice their opinions.

Reflections from the field

Despite all of the above challenges, we were able to collect rich data on the lives of the men and women in Kirtipur and Bungamati two years since the earthquake. This was helped in large part by a community that was welcoming and those who made time for us in their busy schedules.

Through these interviews and focus group discussions, women shared how prior to the earthquake they were involved in paid activities, such as tailoring, carpet weaving, making statues and embroidery work, which was halted because of the disaster. The equipment that women used were either destroyed or damaged by the rubble of their fallen houses. The cash for work programmes in particular – instituted mostly by INGOs – stood out as being helpful because they enabled the beneficiaries to earn money while they were unemployed. They also shared that they had a feeling of ownership over the money that they earned and that they could use it as they pleased to help themselves and their communities in a time of crisis. Those who received money from the government found it useful for clearing the debris of their collapsed houses and constructing temporary shelters.

Having collected all the data, we look forward to sharing our findings over the coming months on the impact (if any) of emergency cash transfers on women’s economic empowerment in Kathmandu Valley post-earthquake.

Srijana Nepal is a researcher and is currently working as a Programme Coordinator at Nepal Peacebuilding Initiative. She has worked as a lead researcher in several internationally funded research projects with a focus in women’s rights, human rights, humanitarian issues and peacebuilding for the last several years. She was a Caux Scholar of Initiatives of Change, USA in 2015 and has also worked as a Fredkorspet (FK) Norway fellow in Thai Volunteer Service Foundation, Bangkok for a year. Srijana holds an MA in Social Work. She can be contacted at nepalsrijana5@gmail.com.

Neha Uprety is currently working as a Programme Officer at Nepal Peacebuilding Initiative. She has also worked as a researcher in humanitarian issues, women’s economic empowerment and peacebuilding.  Prior to working with NPI, she worked as a volunteer in the Family Planning Association of Nepal.  She aspires to advocate for women’s rights and work towards empowering women. She recently completed her Master’s degree in Sociology.

Apekshya Prasai is currently working as a junior researcher at Nepal Peacebuilding Initiative. She has previously worked with child survivors of abuse and female survivors of domestic violence in Kathmandu. She graduated from Bowdoin College in 2016 with a major in government and legal studies and spent a year studying international affairs as a visiting student at the University of Oxford. Her research interest lies at the intersection of gender and militancy and her prior research has focused on women’s strategic value in suicide terrorism and the role of women in South Asian militant organisations. She will be heading to MIT in the fall of 2017 to begin her PhD in Political Science. 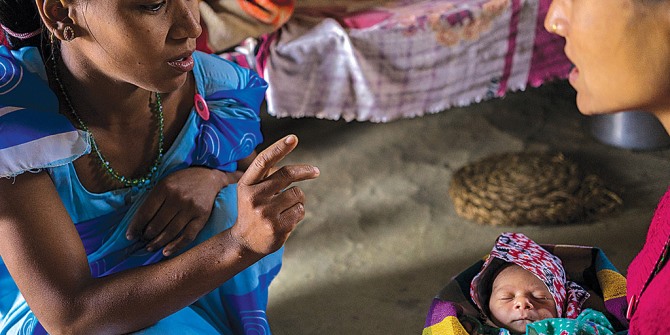 Bad Behavior has blocked 4936 access attempts in the last 7 days.