The change of government in America has raised questions around the future of two major connectivity projects mooted during the Obama Administration. Tridivesh Singh Maini and Sandeep Sachdeva introduce the New Silk Road and Indo-Pacific Economic Corridor, and write that consistent commitment from the US will be required if these ambitious plans are to be realised.

Only recently, the US reiterated its resolve to revive two key projects – ‘New Silk Road’ (NSR) and ‘Indo-Pacific Economic Corridor’. The maiden budget of the Trump Administration, provided an outline for both these key connectivity projects, with the State Department likely to provide financial support. This article will seek to provide a background to both, while also pointing out the opportunities and challenges

In 2011, during a visit to Chennai, former Secretary of State Hillary Clinton spoke about the potential of a New Silk Road, which would revive the ancient Silk Road trade routes which historically stretched across Eurasia. Said Clinton,

‘Turkmen gas fields could help meet both Pakistan’s and India’s growing energy needs and provide significant transit revenues for both Afghanistan and Pakistan. Tajik cotton could be turned into Indian linens. Furniture and fruit from Afghanistan could find its way to the markets of Astana or Mumbai and beyond.”

One of the main driving forces behind the idea at that point of time was stabilisation of Afghanistan. The plan was conceived by Frederick Starr, chair of the Central Asia-Caucasus Institute, a Washington D.C. based think tank which received significant support from the Centre for Strategic and International Studies. 2011 was also a time when there were indicators of improvement in ties between India and Pakistan in the economic sphere: commerce secretaries of both countries met in Islamabad in April 2011 and this was followed by a number of high level exchanges.

One important component of the Silk Road has been the Turkmenistan-Afghanistan-Pakistan-India (TAPI) pipeline, but this has moved forward only in fits and starts: in addition to tensions between India and Pakistan, economic and logistical issues have obstructed the project’s progress. That said, Turkmenistan did commence building its section of the pipeline in December 2015, and in March 2017 the Minister for Petroleum and Natural Resources Shahid Khaqan Abbasi inaugurated the front-end-engineering-and-design (FEED) route survey in Pakistan. Abbasi was optimistic about the progress of the project, while not overlooking the potential hurdles ahead.

At the 2013 U.S.-India Strategic Dialogue, Kerry pointed out that the US and India are working jointly and:

“Cooperating to realise the potential of the Indo-Pacific Economic Corridor, which can spur development and investment as well as trade and transit between the dynamic economies of South and Southeast Asia.”

Later on, during joint statements of India and US, there was further mention of the project:

“Trade between South and Southeast Asia grew from $4 billion in 1990 to $86 billion by 2011. An increase in infrastructure investment equivalent to 1 percent of global GDP would likely translate into an additional 3.4 million jobs in India and 1.5 million in the United States. The United States acknowledges the significance of India’s $120 million investment in Burma’s Sittwe port and commits to explore similar programs leading to future development opportunities.”

Why the New Silk Road initiative was relegated to the sidelines

In recent years, the US version of the New Silk Road seems to have been relegated, particularly as the One Belt One Road Project momentum gained momentum in the last 2 years. This is partly due to the US presidential election, where little attention was given to projects like New Silk Road and Indo-Pacific Economic Corridor.

Since taking office, the Trump Administration has been inward looking, giving mixed signals towards the Asia-Pacific. It has given indications that it would like to be pro-active in the Asia-Pacific region but there has been no real articulation of its views on issues pertaining to greater economic connectivity. The recent announcement by the US with regard to its interest in the two connectivity projects and its desire to find common ground with India would therefore have been encouraging for New Delhi.

While the US-India collaborations have been on a backburner, China has been drumming up support for its ambitious OBOR project, reaching out pro-actively to countries in South, South East and Central Asia. In India all eyes have been on China’s mammoth investment in one component of the project, the China-Pakistan Economic Corridor, but in the meantime China has been developing relationships on multiple fronts to make its ambitious project a reality. Only recently, a meeting was held in Beijing to discuss OBOR and was attended by 60 countries, although India chose not to attend.

Despite its objections to OBOR and tensions with Pakistan, India has been exploring other connectivity projects. For example it has been developing the Chabahar Project, and INSTC to develop links with Central Asia and Afghanistan. A lot of emphasis has also been laid on enhancing connectivity with Eastern neighbours in South Asia. Key initiatives in this context are various bilateral initiatives to increase land, maritime and rail connectivity with Bangladesh as wells as the Bhutan, Bangladesh, India, Nepal (BBIN) Corridor. In pursuit of its Act East New Delhi is also seeking to include Myanmar in this project, and expediting projects which will provide access to South East Asia. This includes the India-Myanmar-Thailand highway as well as the Kaladan multi-nodal project. Given the involvement of Iran and Russia in projects like INSTC and their shaky relationship with the US, there is not much scope of finding common ground with NSR. The projects like BBIN, Kaladan and the three nation highway can however be an important component of the Indo-Pacific Economic Corridor, since US shares a reasonable relationship with all countries involved in these projects.

Continued geo-political tensions between India and Pakistan endanger a number of India’s connectivity efforts, especially the New Silk Road. Islamabad’s resistance to making India part of the Afghanistan Pakistan Transit Trade Agreement, and failure to give India Most Favoured Nation Status (despite India granting the same to Pakistan in 1996) also make it difficult to develop connectivity with countries in Central Asia, the Middle East and Europe.

Secondly, continued US involvement is required for the New Silk Road and Indo-Pacific Economic Corridor projects to advance so it is hoped that PM Modi can persuade President Trump to remain engaged with these ventures.

The third major issue is the question of the umbrella under which the Indo-Pacific Economic Corridor should function. The most feasible option is the East Asia Summit. In a 2015 article James Wallar points out that: ‘The East Asia Summit (EAS) would be a natural fit. All major players of the region are members – India, the United States, China, Japan, Korea, Australia, New Zealand, Russia and the ASEAN 10 member states. ASEAN, known for its convening power, chairs the EAS and has established itself as an important regional focal point’.

Finally, there is no doubt that India has sought to have a greater voice on key security issues in the Asia-Pacific in recent years, but no real efforts have been made for integrating similarly into the ‘economic architecture’ of East and South East Asia, as has rightly been pointed out by Daniel Twining. For the Indo-Pacific Economic Corridor, it is not just infrastructural connectivity, but also greater economic integration and trade which is needed.

In conclusion, New Delhi is setting out a number of ambitious plans for increasing connectivity across the globe. However, the extent to which these plans can be realised will also depend on the commitment of other key players especially the US and Japan. The Trump Administration so far has not been able to articulate a clear vision with regard to the Asia Pacific in general, and connectivity projects in particular. It will be interesting to see whether Modi’s visit later this month will shed any further light on this. 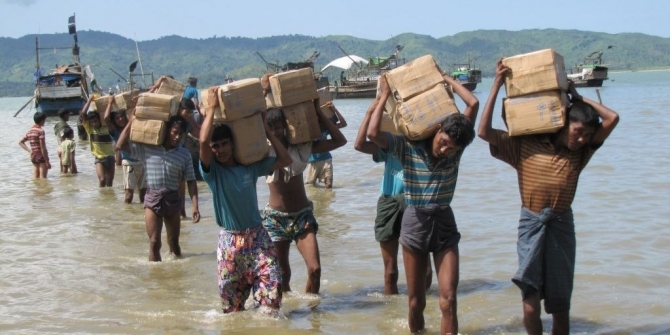