India’s farmers are frequently in the news, whether it is due to the widespread issue of farmer suicides, low yields as a result of unreliable weather patterns, or protests in the face of price crashes. Against this backdrop, Jay Herndon writes that informal cooperatives run almost as businesses could provide a sustainable solution by allowing farmers to capture more of the final price paid by consumers.

Indian farmers have long wrung an uncertain living from the earth. Since independence in 1947, secular democracy has ended the periodic famines and brought economic and human progress far surpassing any previous regime. Today accelerating growth provokes intense debate over the benefits or pitfalls of India’s free markets and reform, but both narratives ignore a pervasive state still circumscribing the freedom and stability of 900 million rural Indians.

A feature article in India Today recently spelled out the obstacles to increasing India’s agricultural productivity: falling plot sizes inhibit mechanisation, laws impede the lease or purchase of land, wasteful flood irrigation, a deficient supply chain allowing far too many fruits and vegetables to rot before reaching stores. In a fit of short-sighted populism, multiple states are advocating waiving farmers’ debts, but it’s hard to imagine how nationalising 2 percent of the country’s GDP would distort farms going forward, never mind the wider damage to India’s fiscal credibility. Other legislation threatens to ban the sale of cattle and oxen for slaughter in markets. Beyond the obvious communal provocation, such laws threaten the meat processing, dairy and leather industries.

Amid this noise and fury, new firms are addressing the challenges that face farmers in India. In 2009 an NGO named Seva Mandir opened a dal mill in Kodra Tehsil, Rajasthan. Kodra’s population of 230,000 is almost exclusively Bhil, which is a designated Scheduled Tribe. The mill allows farmers to avoid the tangled web of purchasers and distributors standing between them and the market. Having solicited a token donation of Rs. 100 from 86 famers, the mill acts as an “informal cooperative” managed by a 14-member executive committee. In all but name, it’s a small closely-held corporation where shareholders elect a board to monitor the business on behalf of owners entitled to a dividend. Talk about “sustainable development” as it relates to environmental concerns and democratic participation frequently misses the more urgent point that nothing is “sustainable” without profits. Seva Mandir wasn’t planned as a start-up incubator, but a commitment to social empowerment has led it down that path, producing businesses specialising in areas such as food-processing, cook-stoves, clothing and tourism.

I spoke to Ranjit Kumar who owns a plot of nearby land and has a stake in the mill. In the last five years he’s regularly migrated for work, leasing his land to the village in his absence. Since the mill arrived, he’s also spared the expense and time of renting a truck for the 35 kilometre trek to the nearest market. That said, he’ll still call his old connection before accepting the mill’s price to make sure he is getting a fair deal. Without being asked, he volunteers that he applies no fertiliser to his “all natural” crops. This might strain credulity for someone familiar with India’s generous system of subsidies, but I can forgive him for telling me what me thinks I want to hear. After all, India’s politicians are all too eager to promise far too much to farmers like Ranjit.

In the politicians’ defence, a USDA study estimated that government investments in research, education and irrigation raised Indian agricultural productivity by over 2 percent annually from 1980 to 2008. But it was thanks to liberalisation that from 2003 to 2013 India experienced faster agricultural export growth than any other country. Today India’s farms still occupy 55 percent of India’s workforce while contributing only 17 percent of GDP. Without legal title landowners can neither sell nor mechanise, while the rural employment guarantee scheme (NREGA) allegedly helping labourers remains plagued by leakage and inefficiency. The people of India deserve better, but to deliver them from this bureaucratic quagmire, government welfare schemes should play a subordinate role to markets.

It’s ironic, but people advocating “corporate responsibility” often overlook the benefits that competitive businesses automatically deliver to the wider society. A jointly-owned company allows investors as a group to achieve economies of scale while spreading risk as individuals. Neither Ranjit nor any of his peers could grow enough dal to make hiring a truck and selling direct to market cost-effective. Nor could they rent time on the line at another mill. Only by acting collectively could the benefits of increased resources and bargaining power accrue to all. The mills’ profits allow farmers to capture more of the final price paid by consumers, warding off the spectre of debt looming over far too many. When each acre of land produces more revenue, owners have an incentive to either mechanise or hire more labour. In the worst case, the mill’s dividends serve as implicit insurance against destitution in the event any one farm fails. While few topics in India are more contentious than caste-based hiring preferences, the mill is Bhil-owned and run by necessity, creating formal jobs and liable for taxes. What so many leaders promised but couldn’t deliver, farmers in Kodra Tehsil are achieving for themselves.

The mill is a start-up where throughput shot from 800 to 70,000 kilograms eight years. They still require capital to achieve the scale needed for regular profits and dividends. That’s why the mill plans to legally separate from Seva Mandir this fall to become a Producer Company, Limited. That change in legal designation will allow them to access greater working capital through Punjab National Bank. I met Kordarlall Pargi, president of the board, when he arrived to sign paperwork allowing the mill to draw more power from the local grid. When I asked him the biggest change in the India in his lifetime, he didn’t mention politics. Instead he noted the shift from subsistence to commercial farming, to a new entrepreneurial mindset previously absent from much of rural India. Dynamic and competitive businesses are chipping away at endemic injustice across India, while recent improvements in insurance and fertiliser policies might just rekindle people’s faith in politics.

India’s staggering diversity prevents the developmental state seen in Japan and South Korea, but government still has a vital role to play, not least in establishing and protecting property rights for small landholders. Men like Ranjit and Kordarlall have the intelligence and initiative to compete and thrive in a globalised market. The government needs to create the legal and financial environment that will enable them to do so.

Jay Herndon is pursuing his PhD in economics at the University of Alabama. This article arose from his field work with Seva Mandir in Udaipur, Rajasthan. You can follow him on Twitter: @Jay_Herndon 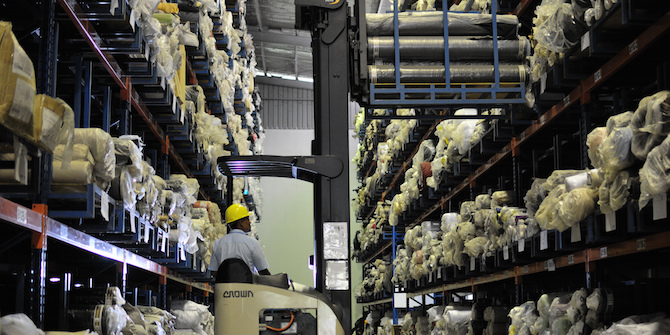