In Islamophobia and Securitization: Religion, Ethnicity and the Female Voice, Tania Saeed explores the impact of securitisation discourses on British Muslim women of Pakistani origin who are studying at UK universities. Bringing to the fore the women’s complex experiences of gender, Islamophobia and racism through the inclusion of their own voices and narratives, this book is a must-read that challenges dominant discourses and provides crucial and timely insight into the multiplicity of British Muslim experience, writes Amani El Sehrawey. 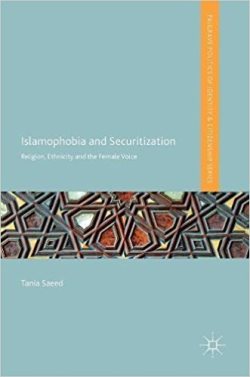 Recent terror incidents in the United Kingdom have once again brought the British Muslim community and its role in countering violent extremism to the forefront of much mainstream media and governmental discourse. On 4 June 2017, the morning after three men committed terror attacks in London Bridge, Prime Minister Theresa May stated that ‘we cannot and must not pretend that things continue as they are. There is— to be frank— far too much tolerance of extremism in our country.’  Although tempered by May’s condemnation of the subsequent Finsbury Park attack as ‘every bit as sickening’ as those in Manchester and London, what these comments and the ensuing dialogue about extremism in Britain mean, in the milieu of the UK’s existing architecture for challenging violent extremism, has no doubt caused trepidation amongst Britain’s Muslims. It is in this context that Tania Saeed’s recently published Islamophobia and Securitization: Religion, Ethnicity and the Female Voice becomes an even more important read.

In the wake of terror incidents, both in the UK and even abroad, British Muslims have suffered a well-documented backlash of abuse, becoming targets for hate crimes because of mainstream associations between members of their faith and groups such as ISIS who claim responsibility for the attacks. Muslims and their communities become characterised within a security framework, whereby members are expected to both monitor and be monitored and are classified along a spectrum of moderates, radicals and those who have yet to be, but are seen as vulnerable to being, radicalised. Social institutions, such as schools, universities and mosques, are also securitised in ways that, laced with discrimination, inhibit human and civil rights, ironically for the sake of protecting ‘British values’ (2).

In this book, Saeed explores the securitisation of British Muslims, specifically Muslim women of Pakistani origin. Utilising a narrative approach, Saeed’s research centres on interviews with young British Pakistani Muslim women between the ages of 19 and 28 who are studying at university. Through these narratives, Saeed contextualises the unique securitisation of her subjects, anchored in their experiences of gender, Islamophobia and racism.

British Muslims exist in an environment where ‘the right to practise Islam is often portrayed as antithetical to Britishness’ (26). For Pakistani Muslims, Saeed argues, the link to Pakistan places them squarely in an othering nexus shaped by racism, Islamophobia and securitisation. Despite mainstream characterisations by the media and society, Saeed emphasises throughout the text that for her subjects there is ‘no dominant narrative about Britishness, Muslimness, or Pakistaniat’ (40). Rather, Pakistani British Muslim women identify differently and overwhelmingly claim themselves capable of successfully balancing their diverse identities. Of the women Saeed interviewed, many specifically clarified that they felt no conflict between being both Muslim and British. One of the young women Saeed interviewed noted: ‘I can be Pakistani British and Muslim at the same time. I don’t see why people have to argue with that. I find it really easy to be all at once’ (40).

With little consideration as to how she self-identifies, the Pakistani British Muslim female, especially if she wears the hijab or other assumed visual signs of Islam, is forced into a particular narrative imposed by the white dominant culture within which she is both a victim and a threat. Muslim women are first characterised according to a moderate/extremist binary, whereby women who wear the veil are deemed extreme and non-veiled woman considered moderate/integrated (58). Those who fall within the extremist category are then further placed within a vulnerable fanatic framework, being viewed as victims, vulnerable to oppression by forced veiling, forced marriages, genital mutilations, honour killings as well as the more recent fears surrounding jihadi brides (62): cultural practices sensationalised by the British media as though endemic in the Muslim community. At the same time, British Muslim women are perceived as being vulnerable to radicalisation. So emerges the securitisation of the Muslim female, the potential hidden terrorist who must be protected and rescued from radicalising elements lest they too become a terrorist.

In contrast to this narrative, Saeed’s subjects — who would be classified according to this logic as extreme because of their appearance — identify as ‘law abiding, peaceful individuals who have been swept away in a socio-political discourse about their identities’ (65). On this imposed identity, one of Saeed’s subject observes: ‘if you are a moderate Muslim, the one who chills and hangs out, has a beard occasionally, you are okay because you are moderate, but the moment you start going too much into your religion be that daari [beard], hijab, whatever praying a little more, fasting more, then you are in the danger zone’ (65).

The securitisation of Pakistani British Muslim women is particularly acute in British universities, Saeed writes. In the narrative about Muslims in Britain, educated Muslims are perceived to be a greater threat, with Muslim women continuing to be categorised along the vulnerable fanatic spectrum. Government policies that impose responsibility on universities to identify radical and ‘at risk’ students focus almost exclusively on Muslim students. Thus, Muslim students find themselves learning in an environment where they are frequently under surveillance, which leads only to further stigmatisation and alienation—not a particularly effective strategy in combatting radical ideologies.

The students Saeed interviewed particularly described discrimination against Islamic societies (ISocs) on their respective campuses. One subject recounted her ISoc repeatedly being accused of connections to Hizb-ut-Tahrir. Other students described their fear of organising events that may be construed as ‘radical’ if they have any sort of political tilt. The result is that debate and discussion, a critical aspect of a university education, are silenced in university ISocs. Muslims students find themselves isolated and afraid to participate in certain aspects of student life, lest they be considered someone to watch for signs of radicalisation.

In Islamophobia and Securitization, Saeed explores the complex socio-political narratives about British Muslim women that places them, particularly those of Pakistani origin, within a framework of radicalisation and securitisation. Muslim women are viewed with suspicion in a story that encapsulates both post-colonial racist narratives about Pakistanis as well as gendered perceptions of the subjugation of Muslim women within a backwards and barbaric culture depicted as being antithetical to the British way of life. Saeed notes that, ironically, the security agenda enforced upon British Muslim women has actually further removed agency from young women, who find their own stories drowned out by socio-political narratives imposed on their perceived experiences.

Through engaging with first-hand accounts of Pakistani-origin Muslim women, Saeed helps to return that agency as her subjects describe their lived experiences in a way that highlights the diversity within the Muslim community and shows that the reality for Muslim women in Britain is very different from what the media and government often attempt to depict. They describe little difficulty in reconciling their multiple identities, do not consider themselves vulnerable to radicalisation and push back against binaries that equate piety with extremism. To them, their securitisation, and the discrimination that often comes with it, is a regular part of navigating their life as British Muslims, but it does not define how they perceive themselves.

Saeed’s work provides an important contribution to the discourse about Islam in Britain. It challenges the dominant narratives about British Muslim women not only through Saeed’s own analysis, but crucially with direct testimony from British Muslim women, who have largely been excluded from discussions about their own experiences. It is a must-read for anyone working on or interested in understanding the British Muslim experience and countering extremism in Britain.

Amani El Sehrawey holds a Master’s degree in European Public Policy from King’s College London and a Bachelor’s degree in International Relations and Muslim Studies from Boston University Pardee School of Global Studies. She currently works at the Harvard Kennedy School of Government. Her research interests include immigration and integration policy, European governance and Middle Eastern politics. She is particularly interested in where Europe and the Middle East intersect, and how to design sustainable policies which effectively address changing demographics in Europe as they relate to migratory flows from the Middle East and the integration of European Muslim communities.

Bad Behavior has blocked 876 access attempts in the last 7 days.