In November in association with the LSE South Asia Centre, LSE’s SU Human Rights society and SU South Asia society co-hosted ‘Rohingya: Ethnic Cleansing and the International Community’s Response’, a panel discussion on the Rohingya crisis in Myanmar. After the discussion, Mabrur Ahmed, Co-founder of Restless Beings spoke with Rebecca Bowers about the escalating crisis and why the UN fails to acknowledge it as a genocide.

Can you tell us more about the role of Restless Beings in the Rohingya crisis and how you have been breaking the news?

So Restless Beings started as a student led organisation 10 years ago and myself and Rahima (Rahima Begum is the Co-founder of Restless Beings) had just graduated and we set up with a few people who were like-minded to try and think of how we can try and make a positive change to the world that we live in. When we came across the Rohingya people, probably in about 2008 or so, we made an undercover documentary which we disseminated. It’s not really publicly available any more but that kind of announced Restless Beings as a Rohingya helping organisation if you like, and as a result of that we continue to report it and keep tracks on the community and kind of act as an alternative news agency because we saw that actually Rohingya news wasn’t being published everywhere. No one was hearing about their plight, no one was hearing about the things that were happening on a day to day basis, so we started to report it, we started to record it, we started to publish it on our website across our social media etc.

There were the big burnings that happened in June of 2012. You know that time there was no international media able to get access. There was a lot of stuff coming back on Twitter like these things were happening, but no one was actually able to access. We had about 250 sources on the ground at the time, Rohingya sources. So what we did was we first facilitated Channel 4 of the UK, then CNN, Al Jazeera, BBC, then many many others to actually go in undercover, smuggle those kind of journalists in, smuggle them back out and then they were reported on the mainstream media. That kind of kickstarted out campaign. A lot of people were coming up to us and saying you know, ‘you’ve managed to get the news coming in how can we actually help the community?’ So we actually started doing more charitable work. We worked with the Rohingya in Indonesia after the 2015 issues, we worked with Rohingya in Malaysia in 2015 as well, we’ve also done stuff inside Burma, Bangladesh, also in India. A lot of it aid based, a lot of it also development based as well. And here in the UK we’ve been constantly working with the international media but also with the UK government, so we presented at the House of Lords a number of times to kind of affect policy change and policy direction. 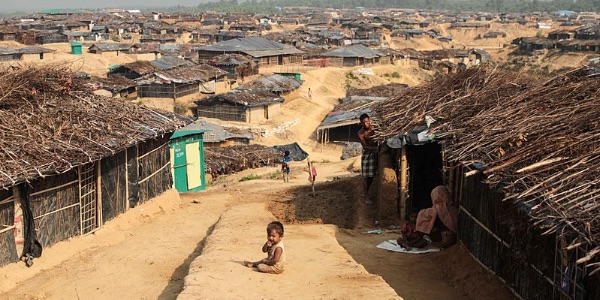 Over 500,000 refugees are said to have recently crossed the border to Bangladesh. Obviously this is ongoing for years as we have discussed in tonight’s panel What can be done to alleviate the refugee situation? If any, what are the viable long-term solutions we could be looking at?

It’s now 610,000. That number is growing every week. You probably heard 500,000 a couple of weeks ago but it constantly keeps growing. The first thing is that they need to voluntarily be repatriated back to Burma and a lot of the refugees are saying ‘we don’t want to go back to Burma because look at what the military have done to us in waves and waves and waves’. So it has to be voluntary first. And second thing is, those who are repatriated, the Burmese government said they are going to repatriate all of those people who can prove their identity – that’s a problem because they can’t prove their identity, they’ve been identity-less, stateless, since 1982. So, it’s unfortunate… it’s a smokescreen. What we can do though is go by precedent. So this has happened before in 1978 and in 1992 when there’s been 200,000 plus that have come, and most of those people were repatriated so we have to stay hopeful that through the diplomatic channels that the people will be repatriated. The question is for how long? Will they just flee again in another way 5 years, 10 years, 15 years? It’s difficult to be very positive but at the important time it’s difficult not to be too gloomy about the situation as it has happened before so we are hopeful that it can happen again.

You have mentioned that a genocide is happening. Why do you think the UN is failing to acknowledge this?

I mentioned in my speech, because it’s a legal term, the UN will do everything in its power not to accept the term genocide, because the moment it does it’s forced to act. It doesn’t want to because of the people that make up the UN. The UN is not a separate organisation it’s a member nation organisation. The veto holding members China and Russia as an example, and other members who sell weapons to Burma, like Israel and Ukraine, and some countries across Europe, India, China, they sell weapons to Burma. It’s not in their interest for anything to happen to the Burmese military which is buying billions of dollars worth of arms. So therefore the UN should act, but it can’t act because it will be vetoed against every decision it decides to do, but also at the same time, be hopeful because there has been a letter signed by all UN nations which has said, ‘we condemn the acts’. It now needs to translate into a resolution, and if not we need peacekeeping zones, we need a safe zone for people to be able to move in and out of, we need aid to be allowed back into Burma, we need international observers back in Burma. There’s lots of things that need to happen in between so even if it doesn’t go straight to the UN level, there’s no harm in us as an international community, the UK government, putting pressure on and saying ‘at least let’s get the aid in’, ‘at least let us send some journalists over’, so maybe those snippets of things can make a difference, rather than okay so everything is going to change, Burma is suddenly going to say ‘Ok the Rohingya are citizens’. That’s not going to happen straight away but there’s lots of in-between steps that we can take.

And with that in mind, what can civil society do? Because we were talking about what students could do, what are the democratic tools available for us as citizens?

So, we’re citizens of the UK, and for the time being the EU as well. So as far as the UK is concerned, people from our students unions who are elected, right the way to our local councillors, to our MPs, to our Prime Minister, Foreign Office etc, they are all answerable to us and we have to remember that – that these people are not elite and exclusive and something that is not attainable, they are voted in by us. So they have to represent our views, so what civil society can do is firstly educate ourselves, secondly make sure that education spreads around and thirdly hold people who are responsible for voicing us, even if it’s the student’s union, if we feel aggrieved by something, then they have to share that grievance and take that right the way up. Like I said as far as the UK is concerned, but also so far as the UK is concerned for the time being. We have access to both. But also at the same time, we are citizens of the world, and Facebook and all of those kinds of platforms that allow us to be global netizens If you like, so we have more that we can offer. Not just a democratic process. We can also be part of a dialogue and conversation beyond just our democratic processes.

And finally, you were saying that people were being over critical of the previous colonial regime and its legacy today. Do you think its detracting from the issue at hand?

I think that all of those things are detracting. Talking about colonialism, government criticism, it’s all detracting because right now, as civil society is concerned, we’re appalled by what we see. Unfortunately the only way that that is going to change is by what our politicians do now. There’s no point in talking about the past, because it’s gone. There’s also no point in pointing fingers and being bi-partisan and saying ‘oh you’re the Tories and we wanted Labour and the Lib Dems’, there’s no space for any of that. This is a universal atrocity. It doesn’t matter which party you are from, which political ideology you are from, which history books you have read, which religious faith background that you belong to, which sexual preference you have, it makes no difference. There are innocent people dying, there are innocent people being forced to flee, as individuals and human beings, it’s our responsibility to engage everything in every possible way. I recently spoke at an event and I said, ‘if this was your brother and sister or your mother and father what would you do?’ An it is our brother and sister, and it is our mother and father, because they are species of the human race which we belong to. What are we doing? Is a tenner in a charity bucket, or a little status on Facebook, or an email to our MP the best that we can do? I don’t think it’s for me to say what people can do, it’s what we individually, internally, what we can do. We need to develop and discover those things for ourselves and I think we have to always be hopeful because so many things across the world, so many things have changed all the time because of what civil society has done. We have to use that as motivation and precedent and run with it.

Rather than being divisive?

The panel discussion was live streamed and can be viewed here. The event report can be be read here.

Mabrur Ahmed is Director and Co-founder of Restless Beings, an international human rights organisation. He holds a BA in Economics from Coventry University. He tweets @RestlessBeings.

Bad Behavior has blocked 939 access attempts in the last 7 days.