It is often assumed the global spread of modern education systems lead to increased knowledge, greater critical skills and more tolerance and understanding, Professor Chandra R. de Silva writes. However, modern systems of education are double-edged swords which could lead to unanticipated, and in some respects, adverse consequences.

We are less than a decade after the end of a civil war in Sri Lanka, which lasted for over two decades and cost thousands of lives.  We also work in a context where many Buddhist monks in Sri Lanka (as well as some groups of monks in Buddhist Myanmar) are perceived, rightly or wrongly, as adopting a hard line against minority groups. Prior to the recent example of the involvement of Buddhist monks in violence by Sinhala Buddhists against Muslims in Sri Lanka, I had for some years sought to explain alternative explanations for this development.

In the context of violence against minorities in Sri Lanka, during a few months stay in late 2017, I began to further explore why many in the sangha (Order of Buddhist monks) have a worldview that romanticises a mythical, ideal past supplemented by a perception of threats (from the Christian West, as well as from non-Buddhist minorities).  In my current study, I began to assume that, while the political culture of a group is fashioned by a variety of influences including the media, much of the information we receive is often processed and analysed through conceptual frameworks that are developed early in life. Therefore, education systems and curricular content and design in the early stages of education are crucial in fashioning attitudes which often have a lifelong impact (See de Silva, 1999, “The Role of Education in Ameliorating Political Violence in Sri Lanka,” in: Creating Peace in Sri Lanka: Civil War and Reconciliation, pp. 109-129).

Most monks in Sri Lanka are educated through state supported piriven educational institutions. Jeffrey Samuels (2010) has correctly pointed out that the education of a monk depends not only on classes in the pirivena and the nightly advisory meetings with the preceptor, but also the bonds each monk makes with other monks and the laity. Nevertheless, I contend that what monks imbibe in the formal classroom, especially in the early years, has a formative impact.

At elementary level in the education of monks in Sri Lanka there are the 466 mulika (primary) piriven that enrol over 15,000 student monks through grades 1-5. The mulika piriven are residential institutions aimed at training monks with an emphasis on discipline. All textbooks are published by or approved by the state. Each enrolled male (only males are admitted) starts learning the classical languages, Sanskrit and Pali. Other required courses include Buddhist Scripture (Tripitaka), Sinhala, English and Mathematics. From the second year, optional subjects studied include Social Studies, General Science, Health, and History. After five years, upon successful completion of a special state-run examination, students can opt to enter a maha privena (secondary education institute) or a vidyayathana pirivena (for post-secondary education).

In terms of knowledge of religion, the mulika piriven provide detailed information on the life story of the Buddha and his main disciples. Information is also provided on the circumstances in which Buddhism emerged and spread in India. Monks learn about the proponents of Buddhism, including King Asoka (who supported the spread of Buddhism) and Sinhalese King Dutugemunu (who is acclaimed for fighting the Tamil King Elara) as well as the monk and nun (Mahinda and Sangamitta) who brought Buddhism to Sri Lanka. 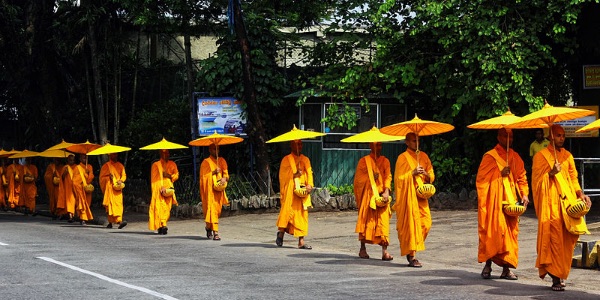 The texts used in teaching history in mulika piriven do have some strengths. The text used in the third year provides a concise survey of ancient civilisations in the Old World (Mesopotamia, Egypt, Mohendojaro, China) and a basic survey of Sri Lankan history. That text also specifically mentions King Vijayabahu (1070-1110 AC) protected Hindu shrines and was popular among Hindus. Almost 25% of the text for the fourth year covers European history, thus providing monks with a view of the West.

Nevertheless, the questioning of the traditional Sinhala Buddhist version of Sri Lanka’s past that has emerged from Sri Lankan universities has had limited percolation into the piriven, and the state sponsored history taught in them has little recognition of the contribution of minorities to the history of the country.

In the 193-page history text for the 5th year which deals with the history of Sri Lanka, for instance, only six pages deal with the Tamil kingdom of Jaffna. Of these six pages, two pages recount its conquest by the ruler of Kotte, two more pages relate to its conquest by the Portuguese and the other two pages are mostly devoted to the lack of evidence of a Kingdom of Jaffna before the 14th century. There is also no mention at all of the contributions made by the Muslim community of Sri Lanka.

These texts can be seen as strengthening the view of Sri Lankan history as essentially that of the Sinhala Buddhists. Such a world-view became accepted in the late 19th and early 20th centuries because it resonated with existing beliefs and gave a basis for anti-colonial and anti-Christian sentiments. It has persisted among Buddhist monks with minimal change after independence. This is unfortunate because one of the goals of education at all levels should be to address stereotypes, socio-cultural biases and beliefs as well as historical prejudices in ways that would increase tolerance. Moreover, the emphasis is on learning content rather than on critical analysis. In these ways, the foundational knowledge that Buddhist monks receive in the mulika piriven is not necessarily the best basis for an understanding of a multi-cultural Sri Lanka.

The maha piriven, which provide education to monks at the next level, do not provide compensations for the deficiencies in the mulika piriven. They do not provide a basic knowledge of other faiths, which was offered to Buddhist monks in pre-colonial times in institutions like the fifteenth century Vijayabahu Pirivena. Their primary purpose was to provide an education for monks beyond the first level. However, they are also seen as institutions providing a second opportunity for many lay students who have dropped out of school but wish to be trained for state examinations. Thus, many maha piriven seek to provide good instruction in Math and in theoretical elements of subjects such as Physics and Chemistry. English is one of the languages regularly taught in many maha piriven today.

The vidyayathana piriven, which provide post secondary education, continue to produce some scholars of note in the field of Buddhist Studies but, even in those institutions, the window into the multicultural world of twentieth century Sri Lanka is limited.

To return to my argument, I contend that the emphasis within piriven on learning subject matter rather than critical analysis does not provide Buddhist monks with the most effective tools of learning. Further, the teaching of a particular interpretation of the past through archeology and history has led to the extended inculcation of a particular Sinhala Buddhist worldview and emphasis on a united or indeed unitary, Sri Lanka with Buddhism. As Indonesian administrator Kamaruddin Amin pointed out, the objective of religious education could be broadened from an effort to inculcate particular religious values to include the understanding of other religions and the promotion of respect for other faiths.

Repeated efforts of the state to reform pirivena education have failed, leaving the monks with limited resources to attempt to deal with a rapidly changing world (de Silva, 1999: pp. 109-129). In this context, the continued articulation of an inclusive world-view by a number of leading Buddhist monks in Sri Lanka is a testament to their ability to overcome a limited early training. A reform of pirivena education that would provide monks with a more relevant base of knowledge and enable them to consider ethnic, sectarian and cultural diversity as an important part of national heritage. It could contribute to better relations among the different faith groups in Sri Lanka.

Fortunately, there are lessons to be learned from efforts in other parts of the world such as South Africa, Egypt and Tunisia, and we might well debate how we approach such objectives in institutions training priests and monks in contrast to teaching religion in public schools. This is, however, a prescription for the long term because curricular changes made today could take a generation to have an impact. As Gordon W. Allport in The Nature of Prejudice, observed more than half a century ago, changing what the young learn in school is unlikely to be effective unless the culture of the community and its leadership also embrace new, more inclusive norms. How to move towards this is a key challenge of our times.

Bad Behavior has blocked 1787 access attempts in the last 7 days.