Dr Shashi Tharoor was recently in the UK to promote his new book  Why I am a Hindu. With a general election coming up in India, the battle between Tharoor’s Congress Party and the current government, the Bharatiya Janata Party, provides an interesting backdrop for the release of Tharoor’s new book. Anishka Gheewala Lohiya had the opportunity to talk to Dr Tharoor at LSE about the relationship between politics and religion in India.

AGL: Is it important for a politician in India to expose religious belief in such a way, and if so why?

ST: Well actually, it used not to be. In fact, I’ve spent a lifetime being discreet about religion except when asked point blank. It was always considered, in India and really within Hinduism, to be a personal matter between you and whatever image of your maker or divinity or of Brahman you wish to worship. So ultimately it wasn’t really something one talked about very much or felt the need to talk about very much. But in the last few years, particularly accelerating after the ascent to power of the BJP, there have been a number of forces unleashed in India who have collectively, through their words, speeches, actions and conduct, created an impression of Hinduism that I, and many others like me, who have grown up Hindu, do not recognise as our faith – in fact, find completely wrong, unjustified, and inappropriate. And so, the moral urgency of standing up for what you believe in and saying “wait a minute, this is Hinduism, this is the Hinduism that the vast majority of Hindus have grown up with. It’s not what you have projected the faith as being”.

Secondly, yes, I am a politician and a writer, and there is a political challenge that has been flung at us, with the ruling party essentially going to the voters and saying they are the only true Hindus in politics — “we are the ones standing up for the interests of Hindus, vote for us, if you’re Hindu.” First of all, that cannot be allowed to go on unchallenged, because that is not true. Second, it suits the other side to frame the debate as one between true believers and godless secularists, but that’s a travesty. There is a debate within Hinduism itself, a battle for the soul of the faith. We have to seize this opportunity to say that when Swami Vivekananda talked about being proud of being Hindu, he explained very clearly what he was proud of and that’s not what these guys are proud of. So, as a politician I say I am a Hindu not just to enter into that first debate, which is very important to me intellectually, but also to neutralise the BJP saying the second thing, in order to be able to say, “all right now I’m telling you that I’m equally proud of Hinduism. My Hinduism is inclusive and all-embracing and co-exists with people in other faiths, unlike your intolerant Hinduism. And most Hindus, when they think about it, would prefer my version rather than yours”.

In your book, you anticipated this critique of the homogenisation of Hinduism. So, could you tell us a little bit about how you imagined responding to such a critique when you wrote that?

Well first of all, I don’t believe that Hindutva is Hinduism. I think that Hindutva is a nakedly political doctrine, spawned out of the racial pride ideas that were around in the world in the 1920s. I think what Savarkar wrote about Hindutva is not very different from the kinds of the things that were written by admirers of Mussolini and Hitler, in the 20s and 30s, and Franco for that matter, and I reject the idea that this has anything to do with Hinduism as a faith. In fact, Savarkar openly admitted that he wasn’t particularly religious himself. He was more interested in this racial identity, and I just don’t believe in racial identity and I don’t believe that Hindus are a race, anyway. So, I think the whole thing is completely preposterous.

So, to continue in that vein, it would be an interesting thought-experiment to see what kind of political Hinduism, you can envisage after engaging with faith as a separate part of political life, or do you think it’s even possible that they can exist without each other?

Well I actually think that religion is not necessary for politics. I think politics is about how society is ordered and religion is about how human beings stretch their hands out towards the divine. And in my mind the two can co-exist completely differently. In other words, I would like to belong to a party where people of every conceivable religion feel comfortable belonging because my party has no say in how they worship but talks instead about politics, economics, the way government is ordered, national security, foreign policy, welfare, I mean the kinds of issues that, to my mind, are legitimate subjects of political contention. But I can’t escape the fact that I am living in a country where others have made this a subject for discussion so therefore I’m obliged to. I remember a conversation with a Muslim journalist friend of mine in the mid-1980s, in which I upbraided him as a friend, in a friendly way, for going on and on about secularism. I said “that’s yesterday’s battle, that’s over”. It’s been almost 40 years since Independence, we are past this business. We are now focussed on economics and heading towards the 21st century. Why do you keep going on and on about secularism? And he said “believe me the BJP is on the rise, they are dangerous for the future of this country. It is extremely important to keep hammering away”. And then look what happened? The same fellow has gone off to become a BJP spokesperson and a BJP minister. But that didn’t make him in wrong in the 80s. It actually opened my eyes to the phenomenon; actually he was vindicated then by what happened with the rise of the Ram Janmabhoomi movement, the destruction of Babri Masjid and eventually the massacres in Gujarat in 2002, which was a culmination of it. 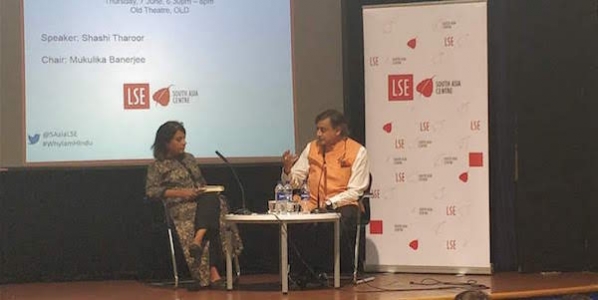 I suppose that question came from the idea of a sense of discomfort and exposing yourself and your religious faith in such an open and public facing way. I was wondering why you didn’t want to frame your research into all these religious texts and figures as a religious book, to promote a view of Hinduism, why did you not just decide to make it a religious book and engage with politics?

The choice would have been there, in other words, my publishers even believed that the first 130 odd pages which just treat with the religious issues, could easily stand by themselves. But I said that’s not the book I want to write. Number one because I am a Hindu, but I am not a theologian or a religious leader. I can only speak as a layman. I am also a public figure. I don’t want to use pompous phrases like a public intellectual, but I believe I have a duty to contribute to the national conversation. The national conversation about Hinduism that has been thrust upon us is a national conversation with political overtones. So, for me to talk about the religion just as the religion, even if it were to advance a view and a description of the faith that is different and distinct from the Hindutva being peddled by the ruling party would leave to me, a sense of incompletion. I felt it was necessary to have that second section, laying out the Hindutva ideology, in their own words so people can see what they believe in. And then that final section saying we need to take back Hinduism — for the true believers, the believers in acceptance, expansiveness, inclusion and so on.

I mean that’s also based [on you] as a public figure, but I was talking more about as a person.

I mean there’s a lot about a person in the first section. If you want to know about my own feelings, my experiences, my doubts, my interrogations about Hinduism as a young man, that’s all there in the first 130 pages.

I found it fascinating to think of Hinduism as the casting of doubt, as you have said on your interviews, such as your Channel 4 interview, this idea of Hinduism as a religion of incertitude.

The fact that even the creation hymn, The Rig Veda, asks the questions of where does all this come from, this wonderful creation, maybe He who surveys it from the highest of heavens, maybe he knows, or maybe even He does not know!

Do you think this is particularly well understood, or well discussed?

That’s why I needed to write the book! Because it is not very well understood. People have forgotten that. And now it was necessary to write this and remind people.

Why do you think people don’t know? Or why do people not engage with that side of doubt?

Partly because a lot of Hinduism has, in popular usage, shrunk to temple worship rituals and so on, with godmen becoming another thing that people seek to worship in amongst the temples and the gurus. And the philosophical underpinnings of the faith are simply absent, unfortunately, from the ordinary worshipper’s consciousness. Now I am not sure how many of the people who read a book like this in English are going to be ordinary worshippers, but it is getting translated into Indian languages and hopefully will reach a wider group of readers who will probably indeed care about some of these things, whose eyes could be opened. I am gratified that not one day goes by without somebody coming up to me and saying, “You’ve opened my eyes, you’ve given me something new”. Or better still, “you’ve spoken for me, because you’ve given words to things that were our experience of Hinduism, but we couldn’t have put the same words to it”.

You can also listen to the podcast of Dr Tharoor’s discussion on Hinduism with SAC Director, Dr Mukulika Banerjee here.

Dr Shashi Tharoor is a notable politician, author and international diplomat, his new book Why I am a Hindu, reflects on the juxtaposition between his private and individual beliefs, with a very public political life. Dr Tharoor has a PhD from the Fletcher School of Law and Diplomacy in the US, and was named by the World Economic Forum in Davos in 1998 as a Global Leader of Tomorrow; he has authored fourteen previous books and has won numerous literary awards, including a Commonwealth Writers’ Prize.

Anishka Gheewala Lohiya is is currently a PhD candidate in the Anthropology Department at LSE working on prayer and Hinduism in India and the UK diaspora.