Despite global income and multidimensional poverty declining during the last two decades, disparities across different regions remain substantial. Nowhere is this clearer than between South Asia and the world’s other regions. In this article, N.R Ravindra Deyshappriya explains why despite global decreases, poverty in South Asia remains proportionately high.

According to the World Bank’s estimates on income poverty, 42% of the world population lived below the poverty line of $1.90 in 1981. By 1990 however that number had reduced to 35%. Similarly, multidimensional poverty (an index that takes into account several factors that constitute poor people’s experience of deprivation) has also been decreasing and globally only 13.5% of people are multidimensionally poor by 2017. Despite this downward trending pattern at a global level, South Asia still accommodates a significantly large share of the poor population in terms of both income and multidimensional poverty.

Regional distribution of the global poor: Where does South Asia stand? 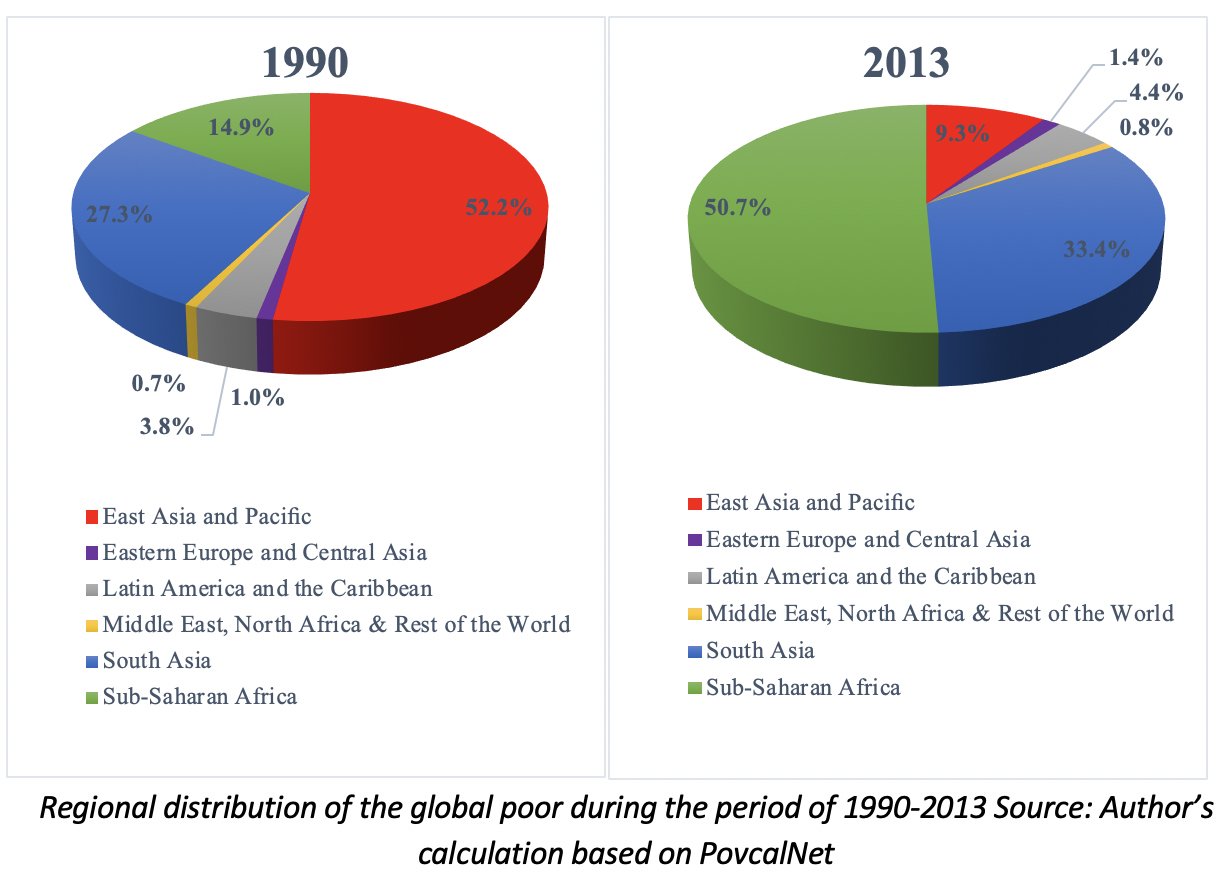 This picture however of the distribution of the world’s poor had drastically changed by 2013. The number of poor living in Sub-Saharan Africa had significantly increased from 276.1 million in 1990 to 388.7 million, accounting for the largest share (50.7%) of the global poor by 2013. Despite East Asia and the Pacific considerably declining its share of world’s poor (42.9% between 1990-2013), South Asia still remained the region with the second largest grouping of the global poor. Specifically, South Asia’s share of the global poor has increased from 27.3% to 33.4% between 1990-2013, despite the number of poor people in South Asia falling by 248.8 million.

Figure 2 below depicts the pace of reducing the Poverty Headcount Index (PHI) of each region along with the world average between 1990-2013. From this graph, it is clear that Sub-Saharan Africa has been accounting for the largest PHI since 1992, reporting 41% in 2013. In contrast, the headcount indices of all other regions by 2013 were significantly below the world average (21.9%) between 1990-2013. In particular, South Asia performed remarkably well in poverty reduction and was able to decline its poverty rates from 44.6% to 15.1% respectively, during 1990-2013. However, the PHI of South Asia is still significantly higher than that of other regions such as East Asia and the Pacific, Eastern Europe and Central Asia, Latin America and the Caribbean. 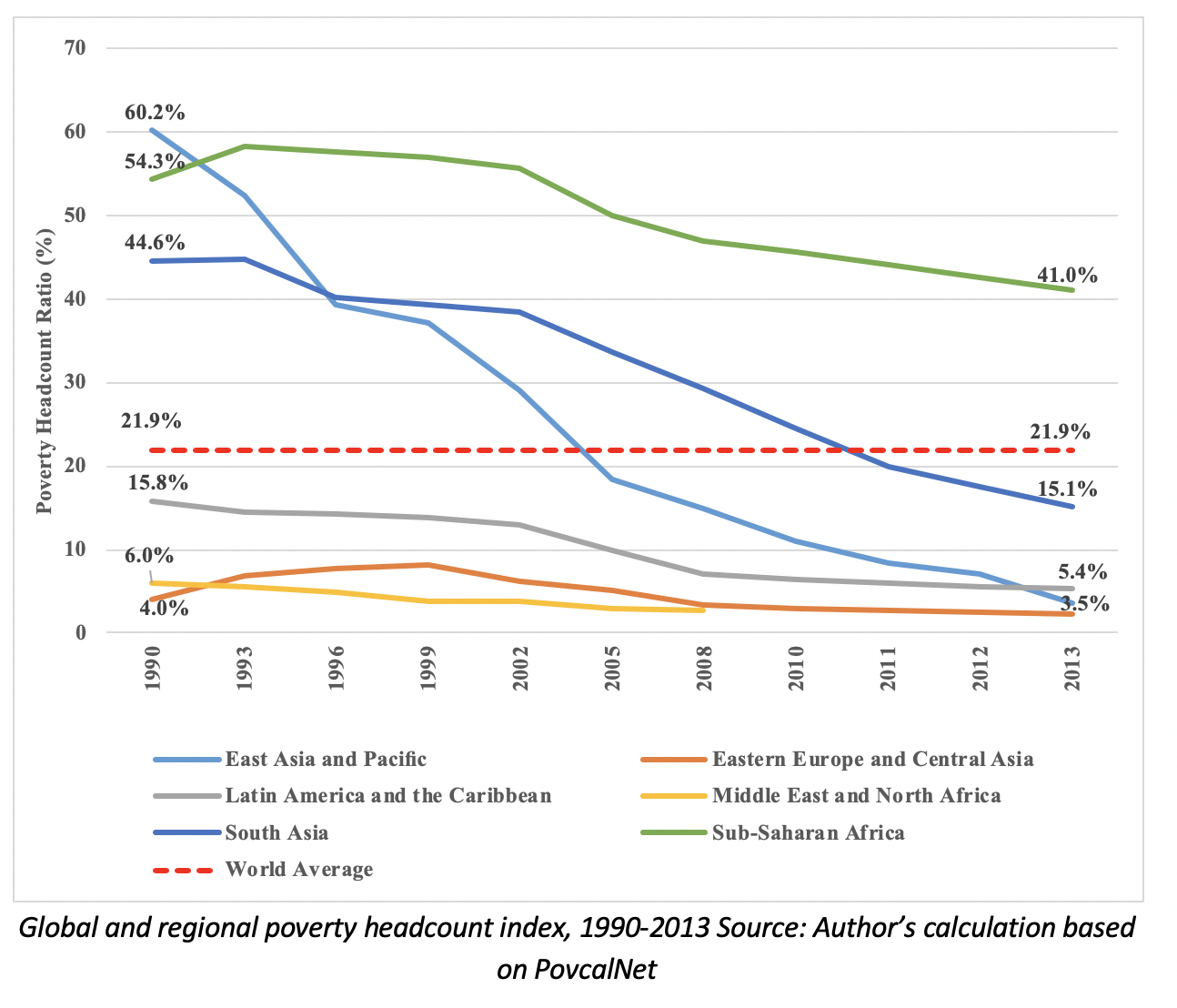 According to Canuto (2013), higher poverty rates and the large share of the poor in South Asia are driven mainly by region-wide political unrest. In fact, political tension and civil wars are common in most  South Asian countries, meaning such turmoil reduces the effectiveness of a country’s anti-poverty policies. In addition, ineffective, non-transparent and non-rule-based anti-poverty fiscal transfer programs in the region do not facilitate poverty reduction while increasing a level of fiscal unrest in an economy.

The Multidimensional Poverty Index (MPI) based on three dimensions and ten indicators, was developed by Oxford Poverty and Human Development Initiative (OPHI). According to this data, a declining trend of global multidimensional poverty between 2011-2017 is remarkable. In 2011, 31% of the world’s population (1.65 billion people) were multi-dimensionally poor while only 13.5% were by 2017. 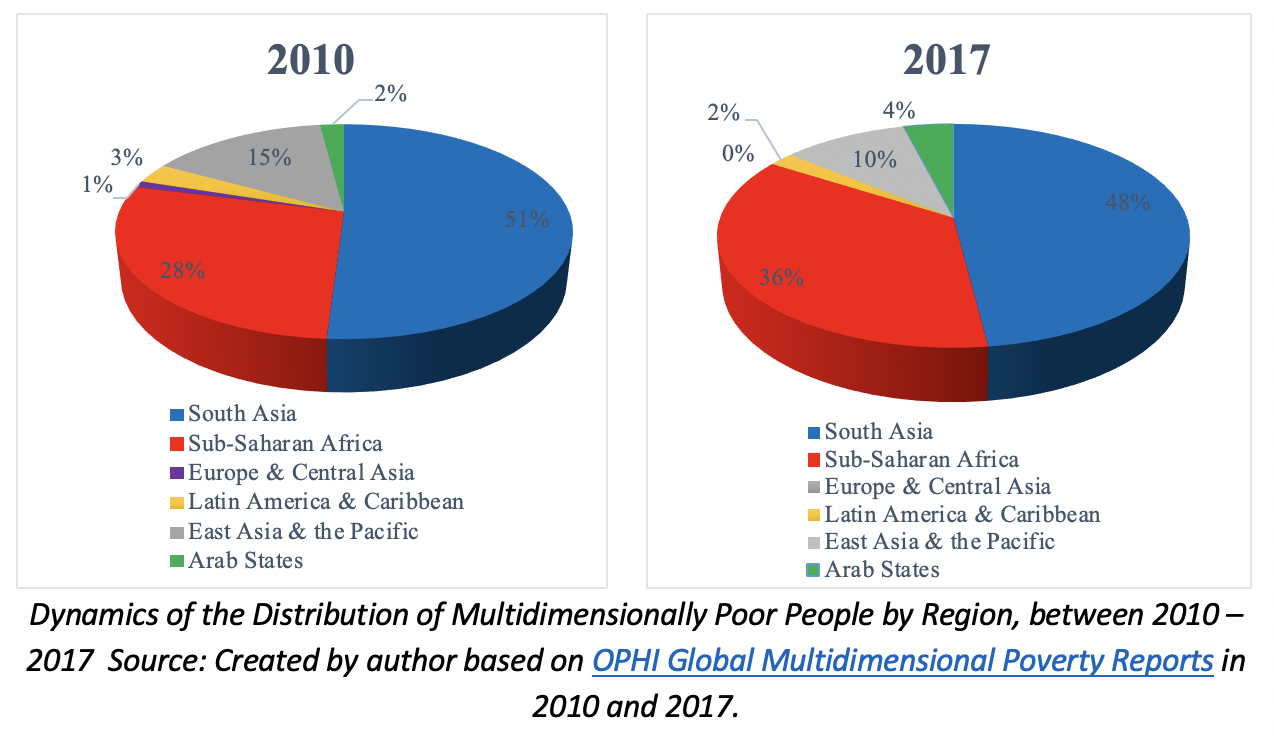 As is shown in the graph above, South Asia accounted for the largest share of global multidimensionally poor people between 2010-2017. More specifically, South Asia accommodated almost half of the world’s multidimensionally poor in 2017. The proportion of poor people in South Asia, however, has reduced in seventeen years by 3% while the shares for Sub-Saharan Africa and the Arab States have increased by 8% and 2% respectively.

It is therefore essential to adopt appropriate anti-poverty policies at national level across the region to eradicate South Asia’s poverty in all its forms. While at first glance the figures on the reduction of poverty globally look encouraging, upon closer inspection the picture is poor for South Asia.

This article gives the views of the author, and not the position of the South Asia @ LSE blog, nor of the London School of Economics. Please read our comments policy before posting. Photo credit: Pixbay, http://Fancycrave.com

N.R Ravindra Deyshappriya is a Senior Lecturer in Economics at the Faculty of Management, Uva Wellassa University of Sri Lanka and PhD student at RMIT University, Australia. 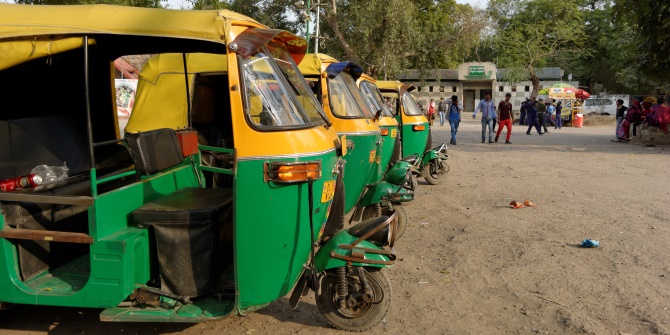 Bad Behavior has blocked 4856 access attempts in the last 7 days.