A common Bengali saying goes ‘to rule the country one needs to control the students.’ Julian Kuttig (Ghent University, Belgium) explains what his research shows about how student politics in Bangladesh shapes (and is shaped by) the political dynamics in “middle Bangladesh.”

Student politics have a long history in Bangladesh and are traditionally a breeding ground for future politicians. Students have played a key role in struggles for independence and democratization, first against the British, then against Pakistan, and finally against General Hussain Muhammad Ershad’s military regime (1983–1990). However, their dynamics have changed concurrently with political and socio-economic transformations following the advent of democracy in 1991.

Since 1991, the country’s two main student organisations, Bangladesh Jatiyotabadee Chhatro Dol (JCD) and Bangladesh Chhatro League (BCL), affiliated with the Bangladesh National Party (BNP) and the Awami League (AL) respectively, have dominated political and social life on (public) university and college campuses. In a contentious bipolar political system commonly conceptualized as ‘partyarchy’ or ‘party-state’ the two student wings serve their mother parties as (violent) party labor to exert control over campuses and thereby enhance mobilization capacity of the (ruling) party machine. A common Bengali saying is, ‘to rule the country one needs to control the students.’

Until 2014, power alternated regularly between the AL and BNP. Each time the government changed, the election-winning party’s student wing would oust the defeated student group and capture the campus, particularly taking control of the dormitories making a ‘seat’ in the hall contingent on participation in their group’s political activities – also known as ‘seat politics’. At times, this process resulted in violent contestation between the student groups. In most cases, however, the ruling party’s student wing, supported by the security forces would eventually succeed to ban opposition leaders and their political activities from campus.

After the 2008, 2014 and 2018 AL election triumph the country witnessed an increasingly authoritarian bent. For some years, especially in the first AL term (2008-2014), Islamo Chhatro Shibir (ICS) the student wing of the Islamist Jamaat-e-Islami (JeI) party, coalition partner of the BNP, resisted the BCL capture leading to fierce clashes and, at times, lethal ambushes on and around campuses across the country. Concomitant to a wider government crackdown on JeI, however, BCL consolidated its hold over higher educational institutions in recent years. With the opposition student wings largely refraining from public political activities, at least on campuses, factional competition and violent contestation over territorial control, patronage networks and party-state resources within the ruling party’s student wing is on the rise.

focused on Dhaka-based universities and mostly disregards the local political dynamics in mofussil (provincial) cities like Rajshahi, a location that Arild Engelsen Ruud refers to as ‘middle’ Bangladesh. In my article, I discuss, through ethnographic perspectives from the 2016 Rajshahi University BCL council, the dynamics and mechanisms of student politics at RU, the process of party-political recruitment of student leaders, and the inter-dependencies between provincial town politics and university campus politics.

From a more general perspective, the political dynamics resemble a typical urban political machine structure, while a closer look reveals a local “underbelly” of a machine that is more chaotic and ambiguous. Based on mostly non-democratic practices and entrenched hierarchies within political parties in Bangladesh, party positions are often allocated based on selection rather than election. Thus, party-political councils in Bangladesh operate as complex and highly contentious lobbying events.

By decoding these complex and opaque processes of party-political recruitment in my case study, I argue that public universities in secondary cities such as Rajshahi constitute a vital source for the urban political machine to recruit party labor as well as provide jobs and contracts to party members. Second, the student council shows that the urban political machine in Rajshahi is not a unitary actor, but a more dynamic, complex, and faction-ridden structure in which students serve as the ‘muscle’ of rival party bosses. Being able to get their followers selected has a mutually constitutive effect, as this determines the influence of local party bosses within the larger political machine and also reinforces their positions of power. Finally, the very opaqueness and uncertainty that surrounds the selection process is the strength of the inner workings of the party-political machine, as this keeps its members engaged. This complexity of ideological commitment, performed devotion to the party, and loyalty to a political patron takes on a form of what I call ‘strategic ambiguity’, which disguises the structuring effects of mere patronage politics

My case study shows that while in the end the two most obvious candidates patronized by the most powerful city AL boss were selected for the president and general secretary position of the RU BCL unit, all candidates believed wholeheartedly in their possible success prior and during the council, because of the pervasively opaque nature of the selection process. No candidate, supporter, or local politician could tell me with complete certainty the pivotal reason for someone to be selected. Success was a combination of several elements pertaining to patronage and performance: strong patronage ties with local and national level politicians that would lobby on behalf of a candidate and provide the necessary campaign resources; muscle power to mobilize people, exercise social control, and coerce other candidates, their potential supporters, and local journalists; past performances that proved unquestionable dedication and commitment to the party; a certain degree of acceptance among the general student body and general public as a legitimate leader; and lastly, performing correctly during the council itself by leading large processions, making a good impression, and ‘giving protocol’ (providing security and company) to national leaders during their visit. What links these together is the central role of ambiguity for the continued success of the AL’s political machine.

The political machine should thus not be perceived as a static structure determining a rigid order but as a versatile form of socio-political organization that allows for ambiguity, complex dynamics, and internal competition, even a chaotic or violent underbelly. It is this ambiguity that is the main motor or glue of the political machine besides the dispensation of inducements. This form of strategic ambiguity keeps people emotionally involved while disguising the structuring effects of pure patronage politics. The spectacle of the council is thus not so much a ‘theatre state’ as a way of triggering all these emotionally laden performances in an otherwise predictable selection process based solely on patronage power.

In summary, public universities play a decisive role within the local party-political machine in Bangladesh. As recruitment grounds for party labor, university campuses are invaluable assets for exerting social and political control and to ensure the authority of the party in power as well as access to party-state resources. In the case of RU, the AL relies on the continuous influx of fresh party labor in the form of thousands of students that each year come from all over the country to the city. This increases the violence capacity of the local machine significantly, but more importantly, it consolidates the machine’s authority. Moreover, a large university like Rajshahi offers ample opportunity for economic accumulation (e.g. tender business) and the exchange of inducements (e.g. jobs and party positions) to party followers, the glue of the political machine.

This article gives the views of the author, and not the position of the South Asia @ LSE blog, nor of the London School of Economics. Photo: Assorted coloured chairs. Credit: @roeldierckens, Unsplash. 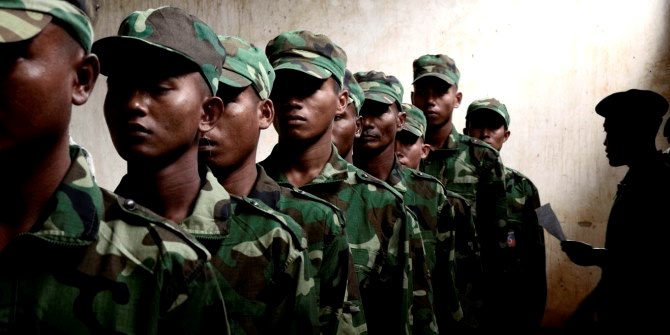 Bad Behavior has blocked 3727 access attempts in the last 7 days.