Many feminists across Pakistan joined a Women’s March on International Women’s Day in the capital and other major cities demanding gender equality and decrying sexual harassment and gender-based violence. While the aims and motivations of the organisers were to support and liberate women suffering multiple forms of oppression Shah Meer Baloch (LSE, MSc Media and Communications) argues that there was an imbalance between the aims and the lack of inclusivity of those marching.

The commitment of women, who took part in the women’s march, displayed a great deal of symbolic power, but it was clear that such outrage of demanding rights was limited to Lahore, Islamabad, and Karachi – the urban areas in which these marches took place – even though some 63 per cent of Pakistanis live in rural areas.

Many women in rural areas can’t even leave home without getting permission from male family members. They are financially, emotionally and tribally dependent on men. The march was therefore restricted in its scope as its participants came from urban towns. Sommaiyah Hafeez, a student who attended the Islamabad march, said, “The event wasn’t inclusive. Women from different social backgrounds were missing”. 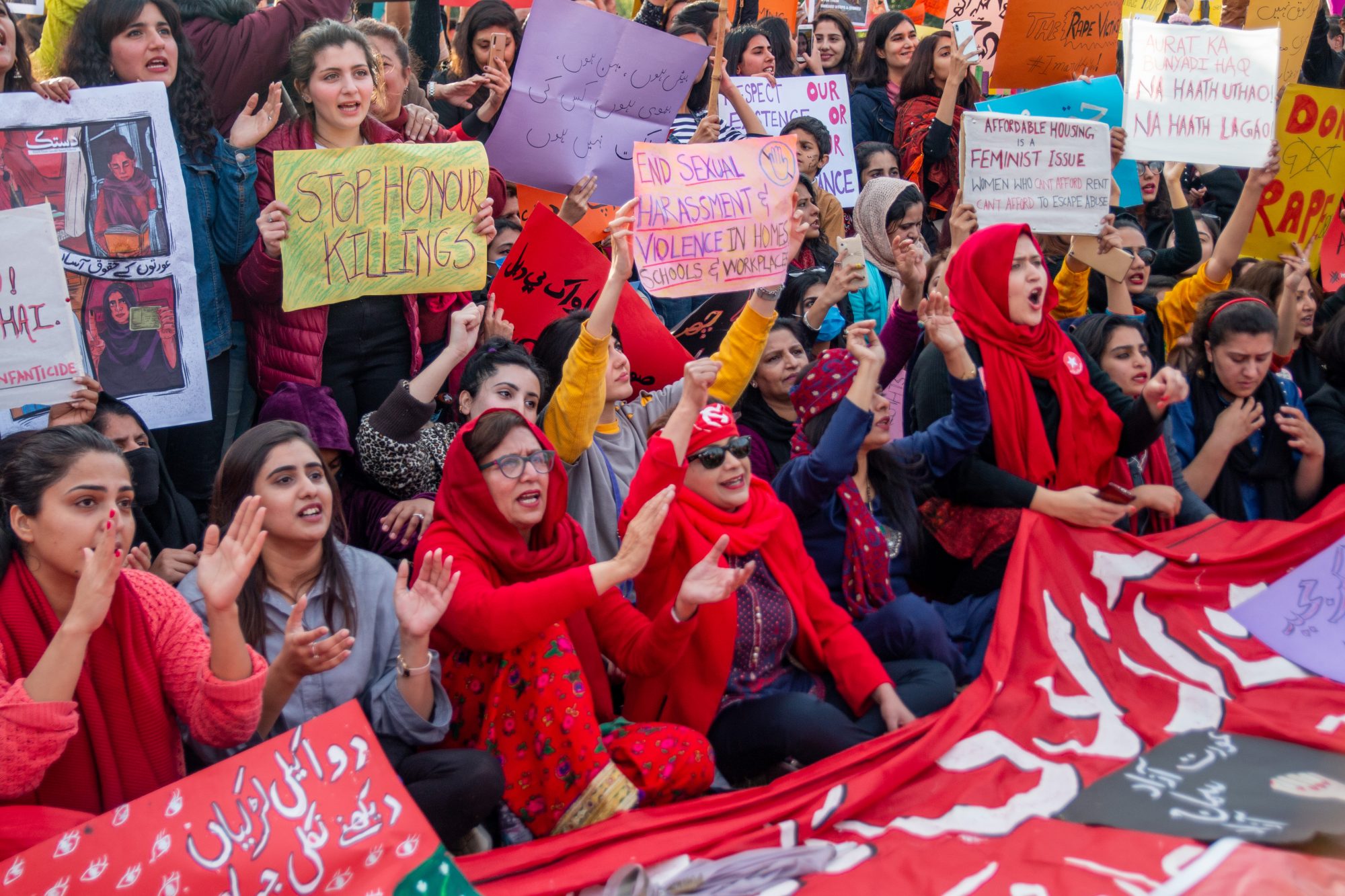 The march was led by urban middle-class women

Indeed, those on the march seemed to comprise only a small subset of Pakistani women: the urban and the upper-middle classes. Although this would have been difficult, it would have been far more successful if organisers had made more of an effort to include the various ethnicities, classes, sects, and women working groups who make up Pakistan.

“Our main focus is on the class issue or struggle and economic exploitations of workers,” Zehra Khan, the General Secretary of HBWWF, told me. “But this is not very important for them, the ones who hold the women March. That’s why we did not celebrate it together.” Although the backdrop to this suggestion might be sectarianism, which continues to dog left-wing groups and feminists around the world, it also contains some truth: women’s interests do not all coincide.

Women’s issues differ across Pakistan from Balochistan to Sindh

Women in Balochistan regularly campaign for the release of their missing family members. From Quetta, some 10 women, along with a few men and kids in late October 2013, walked months on foot – more than 2,000 kilometres, reaching Islamabad in February 2014– to demand the release of their missing male family members. In light of this, it is even clearer that the recent women’s march has not been able to reach all of Pakistan’s women.

“They, organisers of women march, did not agree for giving the sole focus on enforced disappearances and institutionalized sexual harassment and blackmailing at the universities in Balochistan,” Dr. Sabiha Baloch, vice-chairperson of the Baloch Students Action Committee (BSAC), told me from the missing persons’ camp in Quetta. “So, we decided to observe the day,” she said “and raise the voice against the issues which matter the most to us.”

Balochistan is generally ignored by the Pakistani media, leaving activists, including feminists, unaware of the province and women’s issues there. Last year, the resignation of the University of Balochistan’s vice-chancellor following the launch of an investigation by federal investigation agency into allegations of harassment and blackmail on campus prompted only a handful of protests by the left-leaning students in Islamabad. The scandal permeated a sense of fear among parents in Balochistan, where female literacy rate is 33.5 per cent, and many asked their daughters to leave the university and hostels.

Most women’s rights activists, along with the media, ignored the issue. Balochistan, as renowned Pakistani novelist Mohammed Hanif has written, is remote “not just geographically but in our imagination as well.”

The population in Pakistan is largely conservative; its mainstream political parties, accordingly, did not support the women’s march due to fear of losing support. Still, right-wing politicians, leading journalists and religious leaders, threatened to disrupt the women’s march and Pakistan People’s Party (PPP)’s chairman Bilawal Bhutto Zardari, whose party leads the government in Sindh province, proclaimed that nobody could stop the event. While Bhutto’s words are commendable, they evidently ring hollow.

And yet, many feminists, who also supported the march, welcomed Bhutto’s remarks without criticising the PPP’s policies that hurt working-class women and minorities. In July 2019, when female nurses marched to the Chief Minister’s House in Karachi, Sindh, demanding basic rights (including an increase in their financial allowance), police used water cannons and batons against and arrested many of them.

According to the Human Rights Commission of Pakistan, at least 1,000 girls are abducted, married off, and forcibly converted to Islam annually, the majority of them belonging to the minority Hindu community who comprise some 8 million overall out of Pakistan’s population. Due to pressure from Islamist parties and groups, PPP withdrew the proposed bill against forced conversion in 2019. Islamists in Sindh often term forced conversion as a choice. The reality is stark, as poor Hindu girls are threatened, abducted and married off. They are often younger than 18-years and Islamists believe a girl can get married after her menstrual cycle starts. Their families are allegedly asked to remain silent if they wish to live.

Therefore, it is possible to see that the women’s march could both be a courageous challenge to certain retrograde men and violent practices while also being a little more than a one-off event that has little influence over Pakistani politics. Patriarchy and male dominance are part of Pakistani society and strengthened by the state, in various ways. On March 15, Pakistani Prime Minister Imran Khan pejoratively deemed the march a ‘different culture’.

The bitter truth is that countless men and women across Pakistan believe in the same ideology that has been inculcated in the public’s minds for decades: that women should submit to men. Some men and women justify violence. The women’s march was attacked and their murals were defaced in Islamabad before the event.

“If our fellow men attacked the women’s march then there must be a justifiable reason for that, as it is against our Islamic values and against sharia,” said Bint-e-Azwar, a teacher and member of Jamia Hafsa, the group whose members defaced the women’s march’s murals. “We had to make the vulgarity stop. It was just like putting off a fire.”

The march of the urban feminist movement was attacked from all sides including the religious, right-wing, the state, media, and sexist sections of society. Ismat Shajahan, president of the Women Democratic Front (WDF), was one of the women’s march organizers, and one who was injured by this right-wing violence when conservative groups attacked women march on March 8 in Islamabad.

“Historically, patriarchal oppression and sexual barbarism have become part of the public psyche and common sense,” Shajahan said, quoting philosopher Antonio Gramsci.  “It is important to challenge the structures of public psychology, promote critical consciousness and emancipatory ideology of socialist-feminism, and build revolutionary organizations having the capacity to undertake political action.”

The women’s march may have challenged some settled beliefs but to genuinely transform Pakistani politics the movement must include all women. Indeed, progressive, left-wing, secular nationalists, working-class and liberal women have their work cut out for them. Pakistan needs a sustained and intersectional women’s movement to challenge the system and change the country’s mindset.

This article gives the views of the author, and not the position of the South Asia @ LSE blog, nor of the London School of Economics. Featured Image: Protesters marching in Pakistan on International Women’s Day; Credit: Mashal Baloch, Pakistan

Shah Meer Baloch is an MSc student in Media and Communications at LSE, and a Chevening scholar. Baloch is also a freelance journalist. His work has been published in The Guardian, the New York Times, The LA Times, The Diplomat and among other publications. He tweets @shahmeeralbalos. 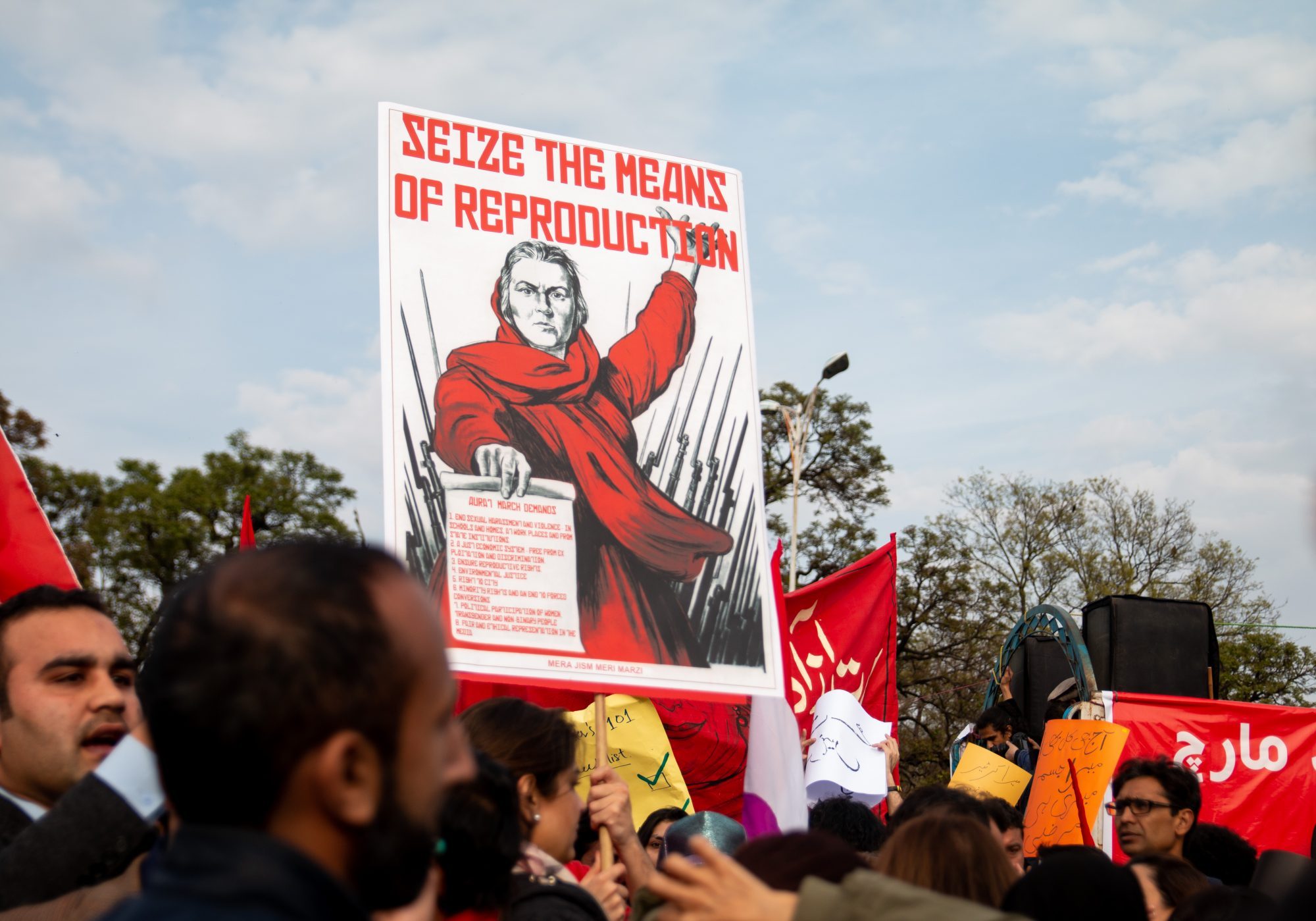