On 12 May 2020 three gunmen stormed the Dasht-e-Barchi hospital in Kabul killing many inside. Here Sajjan M. Gohel (Asia-Pacific Foundation, London and Visiting Teacher, LSE) and David Winston (Asia-Pacific Foundation, London) analyse the terrorist hydra network that plotted the attack and how the complex web of terrorist groups form part of a wider grouping within Pakistan and across South Asia, a grouping that could derail peace talks between the Afghan government and the Taliban.

On 12 May 2020, a new low in the recent history of violent acts of terrorism in Afghanistan was reached when three gunmen stormed the Dasht-e-Barchi hospital in Kabul and attacked the maternity ward, killing nurses, women in labour, and newly born babies. The group of terrorists responsible for the attack gained access to the hospital dressed as police officers and moved methodically straight to the maternity section of the hospital, passing other buildings and wards closer to the entrance.

Two women were killed in the delivery room, dying before their unborn babies drew their first breaths. One was shot dead beside an incubator shielding her baby. Eight people were killed in their hospital beds, including two new-born babies. Some women found shelter in hospital safe rooms with one patient giving birth as the attack ensued.

Afghan special forces, quick to arrive at the scene, spent hours fighting the three terrorists, before neutralising them. During this attack, that took place during the month of Ramadan, 24 people lost their lives. Médecins sans Frontières (Doctors Without Borders), who had played an important role in developing the hospital’s maternity ward, have stated that doctors, nurses, pregnant women, and babies were the targets of the terrorists from the start.

The U.S. Special Representative for Afghanistan Reconciliation, Zalmay Khalilzad, stated that the ISIS affiliate, Islamic State – Khorasan Province (IS-KP), was behind the hospital attack. He did not blame the Taliban, which drew critical reactions from not only the government of President Ashraf Ghani, but also from many people across Afghanistan, as many Afghans believe that the West has been sanitising the Taliban’s image, overlooking their terrorist activities and ties. Despite the recent peace talks, many also hold the view that the Taliban have taken few real steps for peace.

While the Taliban denied involvement in the attack, there is significant evidence tying them directly to it through their Haqqani network, led by Sirajuddin Haqqani. From our private conversations in the middle of May with law enforcement, security and military officials in the West, it has become clear to us that the Taliban has accepted and conceded that several major terrorist attacks in Afghanistan did indeed involve collaboration between IS-KP, the Taliban’s Haqqani network and other terror groups based in Pakistan.

Challenges to the Peace Talks

On 17 May 2020, President Ghani and the former Chief Executive of Afghanistan, Abdullah Abdullah, signed a power-sharing agreement in which it was agreed that Abdullah would take a leading role in peace and reconciliation talks with the Taliban. The international community was quick to support the formation of an inclusive government – a positive development in the stability and solidarity for Afghanistan’s political apparatus.

However, it remains to be seen how the Taliban will ever agree to a comprehensive peace agreement that ends violence, safeguards civil society and women’s rights, and eliminates terrorist safe havens for al-Qaeda and IS-KP. In the eyes of many, there is perhaps a greater prospect of finding a vaccine for COVID-19 than seeing a day when the Taliban will truly commit themselves to finding a lasting peace. (Incidentally, there are reports which suggest the coronavirus has spread within the hierarchy of the Taliban in both Doha, Qatar and Quetta, Pakistan.)

The recent brutal attacks in Afghanistan occurred during the COVID-19 pandemic when the West has been understandably distracted, but it has laid bare major weaknesses of the 29 February 2020 Doha agreement between the U.S. and the Taliban. On 27 May, a United Nations report stated that the Taliban have retained close links to al-Qaeda and sought its counsel during the negotiations with U.S. officials, despite promising to break ties with the terror group based on the Doha agreement.

Furthermore, nothing in the Doha deal technically obliges the Taliban to prevent the atrocities Afghanistan has witnessed in recent months. The timing of the hospital attack, therefore, needs to be seen in the context of other events that illustrate the murky nexus that exists between different entities whose every action results in a set of devastating attacks on the Afghan people.

On 25 March, a Sikh gurdwara was attacked by suicide bombers and gunmen in Kabul. 25 people were killed in the coordinated assault. IS-KP claimed responsibility. Soon after, in a significant counter-terrorism operation, Aslam Farooqi (aka Abdullah Orakzai), the Pakistani leader of IS-KP, was arrested in Kandahar province by Afghanistan’s National Directorate of Security (NDS).

During the time of his arrest, Farooqi provided the names and locations of other members of IS-KP. Subsequently, the NDS conducted a number of successful operations, including arresting Farooqi’s predecessor as head of IS-KP, Mawlawi Ziaul Haq (aka Abu Omar Khorasani), who had retained a prominent position within the terror network.

Critically, Farooqi revealed what many in the West had suspected over the last eight months. Under his reign as head of IS-KP, his terrorist group had not only cooperated with the Haqqani network, but also with the proscribed Pakistani terrorist outfits Jaish-e-Mohammd (JeM) and the Lashkar-e-Taiba (LeT), the latter of which Farooqi was once a member. The LeT was behind the synchronised 2008 Mumbai Siege Attacks that killed 166 people; and the JeM’s most notorious recruit was the British-Pakistani Ahmed Omar Saeed Sheikh who was involved in the abduction and brutal murder of American journalist Daniel Pearl of the Wall Street Journal.

From our recent interviews with Afghan security officials on the attack, it has become clear that the individuals tasked to carry out the attacks received training at JeM camps at Chaman and Tolandi in Pakistan. The LeT provided the operatives and identified the targets in Afghanistan that are principally designed to undermine the Afghan government and sow social, economic, and political tensions. The Haqqani network, having substantial resources through their criminal enterprises, provided coordination and logistical planning. IS-KP assisted and initiated propaganda output while taking overall responsibility for the attack. Farooqi’s admissions enabled Afghan security forces to dismantle various IS-KP networks tied to the Haqqani network.

The common denominator with these groups is that they all have retained relationships with the Inter-Services Intelligence Directorate (ISI), which raises questions about how much the Pakistani military establishment knew about these attacks. This has strained ties between the Afghan and Pakistani governments as accusations mount from Kabul that Pakistan had prior knowledge of the attack and intended to maintain plausible deniability by using different groups for various stages of the terrorist plot.

Unravelling the Complexities of the IS-KP Axis

Among the myriad of extremist organisations that operate within Afghanistan, it is important to understand the complexities of their structures, including within IS-KP, which is not a single monolithic group. In the summer of 2019, IS-KP split into two factions: one Pakistani grouping led by Farooqi, and the other alliance of Central Asians. The Central Asians suspected Farooqi of being an agent of the Pakistani ISI, or at least of having links to them, and believed IS-KP was being hijacked by the Pakistani military. In response, the Central Asian contingent relocated to northern Afghanistan attempting to create a large hub in the Badakhshan districts of Warduj, Jurm, and Yamgan.

Understandably, the assumption some make in the West is that the Taliban cannot achieve a sustainable coexistence with IS-KP as the two organisations compete for territory, recruits, and sources of revenue. The reality is that there has been a consolidated marriage of convenience between IS-KP, the Haqqanis, JeM, and LeT for quite some time. They share common enemies: the democratically-elected Afghan government and the West, which once stood in their way, but now is seeking a speedy exit strategy from Afghanistan.

Immediately after Farooqi’s arrest, Ehsanullah Ehsan, a former Taliban spokesman and associate of Farooqi, claimed on social media that the NDS’s announcement of the arrest was false. Ehsan was able to escape house arrest in Pakistan and somehow ended up in Turkey. The Taliban released an official statement echoing Eshan’s claims. The uniformity in statements is evidence of a collaborative IS-KP-Taliban relationship.

Despite having some foreign terrorist fighters (FTF) in its ranks, the IS-KP leaders, including Hafiz Saeed Khan, Abdul Haseeb Loghari, Abu Saad Erhabi, Abu Omar Khorasani, and Aslam Farooqi, have so far all been Pakistani nationals, reiterating the group’s Pakistani connection. Moreover, Urdu, and not Pashto or Dari, is the language of communication for IS-KP.

Looking back at the attacks on the Sikh gurdwara and the Kabul hospital as well as the capture of Farooqi by Afghan security officials, they provide much perspective as to the challenges Afghanistan currently faces.

By revealing that IS-KP has a strong relationship with JeM, LeT and the Haqqani network, it makes it even more questionable why the Pakistani government asked for Farooqi’s extradition. There are perhaps concerns he may reveal too much about his relationship with the Pakistani military and this could affect Pakistan’s ‘grey listing’ with the Financial Action Task Force (FATF). Interestingly, Pakistan has never taken any legal action against Farooqi for his alleged anti-Pakistan activities, such as of filing a case against him or placing him in Schedule-IV of the Anti-Terrorism Act 1997.

Following the capture of Farooqi, Human Rights Watch called on the Afghan government to bring appropriate war crimes charges against him based on Article 337 of Afghanistan’s penal code for his alleged role in directing attacks against civilians in Afghanistan. It will be very telling if the Taliban at some point request Farooqi’s release.

Presently, IS-KP remains headquartered in Nangarhar, the transit route of the lucrative drug trade, near Pakistan’s border. The COVID-19 outbreak already has, and will, continue to affect terrorist activity around the globe in a myriad of ways; the closing of borders will make transnational enterprises more difficult, yet the distraction and vulnerability caused by the virus has left vacuums for terrorist networks to exploit in Afghanistan.

Aslam Farooqi’s revelations of the IS-KP hydra with the Haqqani network, JeM, and LeT weaves a complex tapestry of collusion and cooperation between several terrorist organizations, criminal entities, and the Pakistani military that has dire implications for the security of Afghanistan and the world. Despite Farooqi’s capture, the relationships between IS-KP, the Haqqani network, JeM, and LeT seem likely to grow in the future as their aims continue to align.

This article gives the views of the authors, and not the position of the South Asia @ LSE blog, nor of the London School of Economics. Featured image: Network Connections; Geralt, Pixabay.

David Winston, is a Senior Research Fellow with the Asia-Pacific Foundation and researcher on the connections between organised crime and transnational terrorism. David received an MSc in History of International Relations in 2015 at the LSE. 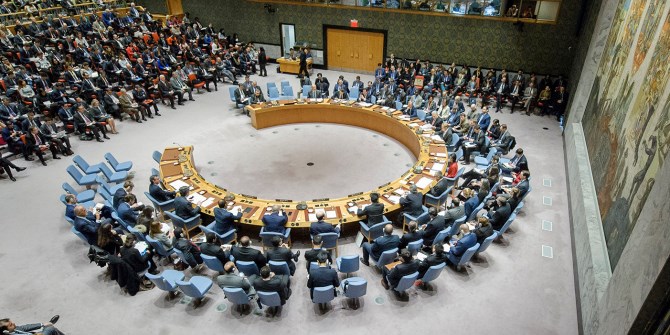 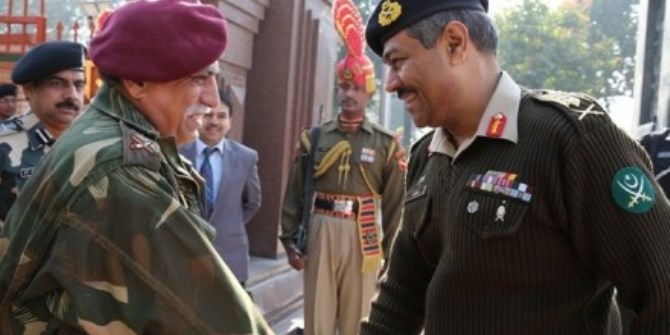 Bad Behavior has blocked 3857 access attempts in the last 7 days.