Greening the Growth in Nepal and Bangladesh While Achieving LDC Graduation

Greening the Growth in Nepal and Bangladesh While Achieving LDC Graduation

The impact of the COVID-19 crisis has been particularly devastating for the Least Developed Countries (LDCs). Nepal and Bangladesh, two LDCs set to graduate out of their LDC status in 2026, may now be forced to focus much more sharply on an economy-oriented approach to achieve their imminent graduation. Environmental concerns, though widely recognised, are in danger of being sidelined. Bishal Baniya, however, suggests measures that will allow policymakers to keep greening the development efforts as they work towards their graduation targets.

Following the resolution adopted by the United Nations General Assembly on 24 November 2021 (A/RES/76/8), the two South Asian nations, Bangladesh and Nepal, will achieve promotion from the Least Developed Country (LDC) status in 2026.

The imminent graduation reflects the progress made by both countries in the last few decades across three major fronts: gross national income per capita (GNIC) , economic vulnerability index (EVI), and Human Asset Index (HAI). Together these measures reflect a strengthening of the economy sufficient to take these countries out of the LDC category.

While the COVID-19 crisis halted the progress temporarily, the two South Asian nations are expected to rebound from the economic and social damage in the next four years, which is their preparatory period for graduation.

Against this backdrop, it is understandable that national policymakers in these countries will likely emphasise economic recovery over any national commitments to deliver the goals of the Paris Climate Agreement (PCA) and the Sustainable Development Goals (SDGs). The world has been here before. In 2008, when the global recession hit, economic recovery was the top priority for most countries but green growth also  emerged simultaneously as a growth paradigm that emphasised environmental protection alongside economic growth. However, the difference this time is the widespread recognition of green growth in many developing countries and LDCs, including Nepal and Bangladesh, despite some criticism about its suitability in LDCs. The Global Green Growth Institute and the Government of Nepal, for example, collaborated to produce a Green Growth Potential Assessment country report in 2017 to subsequently deliver a Green Growth Programme at both federal and provincial levels. Likewise, the Perspective Plan of Bangladesh (2021 – 2041), an undertaking of the Government of the People’s Republic of Bangladesh, is clear on adopting the green growth strategy.

After the COVID-19 crisis, however, Bangladesh and Nepal’s policymakers face a tough balancing act between environmental and economic agendas  mainly because of the time constraints before them: they have COVID-19 recovery and LDC graduation on the one hand, and commitments pertaining to the PCA and the SDGs on the other, all of which are to be delivered before 2030. Assuming green growth binds the economic and environmental issues together, I discuss its present status and future avenues in the two South Asian nations in this context.

There are a variety of notions around green growth with nuances in conceptualisation and definitions provided by the World Bank, Organisation for Economic Cooperation and Development (OECD), and the United Nations Environment Programme (UNEP).

The OECD’s green growth definition and indicator framework applied in Bangladesh and Nepal showed that both countries are greening their growth. In the last two decades, the amount of GDP generated  per unit of resources used (energy, metal ores, and non-metallic minerals) in the economy has been increasing steadily for both countries. Despite this progress in resource productivity, the share of renewable energy in the energy mix decreased for both countries between 1985 and 2016. This trend is likely to continue as absolute resource consumption, and the associated Green House Gas (GHG) emissions, are likely to increase as the two economies expand.

The structural and inflation effects that provided  unintentional resource-efficiency gains are not part of the prescribed basket of climate mitigation actions that help to deliver national commitments on environment goals (e.g., PCA and the SDGs). Instead,

it is technological changes aimed at: increasing the share of renewable energy in the energy mix, reducing absolute resource consumption, and reducing GHG emissions that are the intended climate mitigation actions

under the PCA, and under the SDGs to a lesser extent.

There is an absence of sufficient technological changes across Bangladesh and Nepal economies, which makes the prospect for green growth appear challenging. However, moving forward, the two countries can still embrace the concept of green growth via improving technical efficiency of resource- use as this is an area where opportunities have so far been underutilised. Such a route can help to continue progress in resource productivity.

Reductions in absolute resource consumption and GHG emissions, however, are harder to implement despite the environment-focussed green growth narrative that these LDCs have embraced. In the shorter term, this narrative may need to be re-oriented towards focusing on overall economic productivity, at least  until 2026, when both countries will officially graduate from the LDC status.

Nepal and Bangladesh face structural impediments to growth (e.g., vulnerability to economic shocks, and underutilisation of productive natural resources, as well as human and financial capital). This is a pressing issue needing resolution, particularly after COVID-19 that has created more socio-economic chaos in many LDCs (including both of these countries) than in the rest of the world. These structural impediments mean that there is an insufficient diversification of economic sectors and a dependency on low-productive economic activities. These limit the effectiveness of green growth; consequently, policymakers may have to give up some possible environmental benefits in the short run.

For example, aiming for absolute reductions of the critical resource of biomass – that represents the major share of both energy and material consumption in Nepal and Bangladesh – may not be feasible. Biomass as an energy source has become even more important for rural households in the aftermath of the COVID-19 crisis, given the limited dissemination of modern renewable energy technologies in most LDCs, including in Nepal and Bangladesh.

Thus a weak green growth that Nepal and Bangladesh already possess is suggested as the best way forward during the preparatory period for LDC graduation. This suggestion is made keeping in mind that poverty reduction is the top agenda, which has now become more important than anything else because of the economic fallout from COVID-19 that had a negative impact on the per capita income, increased the number of people living below the poverty line, changed the structure of economies, and resulted in the contraction of economic output.

In this period, it is suggested to focus on policies aiming at: 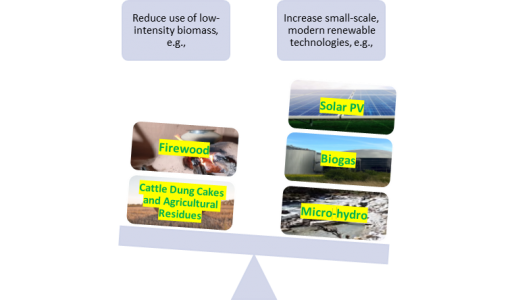 b) improving the technical efficiency of resource use (Figure 2), particularly in residential and manufacturing sectors that contribute to the majority of resource consumption and are least resource productive sectors in these countries. 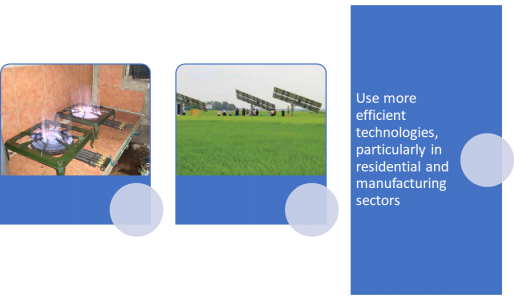 These suggestions still further green growth by impacting on consumption of biomass-based resources but only the ones that contribute less to the overall economic productivity.

Nepal and Bangladesh’s natural wealth – an economic as well as environmental asset – generates subsistence for most rural populations. It will continue to do so after the COVID-19 pandemic, as both countries rebound economically. Therefore, at the present time, overall economic productivity, which is key to overcoming the structural impediments in the economy, appears to be the correct priority for both Nepal and Bangladesh. In the longer term, however, the green growth narrative in these two countries may converge with that in developing and developed countries so that they are able to focus specifically on absolute reductions in both GHG emissions, and the use of non-renewable resources.

Bishal Baniya has a PhD in Sustainable Futures (University of Technology Sydney, Australia) and is interested in researching resource-efficient and renewable energy transition, green growth, and climate change mitigation in general.