TALES FROM THE LSE LABYRINTH LIBRARY

As I write this, it’s essay week, so along with almost all the other postgrads, I’ve been getting very well acquainted with the library lately. Am I the only one who thinks the words library and labyrinth sound eerily similar? Mere coincidence? I doubt it! Anyway, when I first started at LSE, I was warned that the library would become a second home to me. Someone else advised me to always book seats in advance. “Bookings for a study space open a week in advance, so be quick”, the same wise owl said.

Yeah, sure, I thought.

At my undergrad university, you could count the number of days the library was full on your fingers: exam days. Otherwise, you were almost guaranteed a seat, and at weekends you could take your pick! It could be that it was because we had one of the largest libraries in East Africa and the student population was not that huge, but I don’t think that really applies. Here’s something I overheard from two students walking ahead of me in the LSE Library a couple days back:

“LSE has the largest social science library in the world and the most selective student intake procedure. And library’s still always full!”

And indeed, that sounds oxymoronic, but I think it is a testament to the drive and dedication of LSE students.

I remember deciding to come to the library one Sunday, feeling particularly virtuous (read guilty). So I walk in like a boss (an expression we use in Kenya when you’re feeling very confident) only to find the place full! I kid you not; I couldn’t find a seat!

It is not surprising that the library is always full – after all, the LSE library is truly a thing of marvel. The building is beautiful – well-lit, spacious and with really comfy chairs. The staff are friendly and helpful and the library is as efficiently managed as I could have imagined.

But for me, taking a step into the library is always like taking a step into a repository, because I suppose that is what it is – a boundless source of knowledge. There are copies of all the leading journals and periodicals and special collections. I was excited to hear that LSE has an archive – I was transported into visions of papyrus scrolls and magnifying glasses (need I say that this is not the case?). And do not get me started on the e-library!

There is something amazing about walking by shelves lined with old books, rare books and first editions of some of the most celebrated classics. Sometimes all you can do is take a step back, take a deep breath and revel in the joy of being surrounded by the words of masters, and the ideas of legends. To have access to so much knowledge is, for me, like having access to the greatest treasure.

But moving back to the more pragmatic hassles of finding a seat in the library! Come with me on a journey through the process.

You have to pass through the automatic doors (which for some strange reason, only close automatically, not open) and the turnstiles (much fumbling for IDs here). This is probably the easiest part of it all.

Given that the lifts are usually quite full, I often take the stairs (it also gives me an illusion of fitness), so I have become well acquainted with the stairs and the perilous ascent up to the fourth floor. Let me expound further.

We have this lovely spiral staircase that winds up all six floors. It looks amazing and is carpeted. But that is not the salient feature of the stairs – what is interesting is that they are really large in terms of width! One step per stair is just not enough, unless your legs are really long. So, most people end up doing a kind of goose-hop up the stairs, trying to decide whether to make two small steps on each stair, or one extra-large step. Heaven forbid you are uncoordinated like me, or are carrying a heavy backpack or lots of books (also, like me). You will probably do this hop-march routine with added features, such as the trip or the stumble! Or, you might just brave the queue for the lift.

Now on to the seating arrangements:

My favourite part of the library is the basement, where these really cushy beanbags line the floor; perfect for slumping in when you have a mind-freeze or for lazing around (sleeping) in after a particularly gruelling session, or just for chilling out. The group study rooms are pretty cool, and they come with whiteboards and markers, which I think are really helpful. There are also the quiet zones where whispered conversations, coffee cups and the sound of fingers of keyboards reign supreme over the stacks of notes and the yellow-tipped highlighters.

And then, there is the silent zone, which is fittingly marked in red. Oh, that sacred shrine of silence, that sanctum of learning, where breathing loudly is as bad as blaring music. I sometimes worry about entering the silent zone with my headphones on for fear the music will still be heard. I will now dispense some pearls of free wisdom here and advise everyone not to study in the silent zone for extended periods on an empty stomach. Trust me; you don’t want to pull any eight-hour sessions here without a break for food.  Reason: if your stomach growls (and let’s face it, they do after six hours of starvation) … it WILL be heard! Your hunger will be exposed! Such is the silence that a faint rumble is loud enough to be heard by the entire table! In fact, I was once sitting at a table and I think we were all hungry, considering how frequent the faint tremors and rumbles became, and how audible. So watch out, lest you be serenaded by (or serenade others with) the symphony of the rumbling stomachs. And do not think about sneaking food in here; the crunch on an illicit biscuit is as audible as a foghorn.

But anyway, there’s not always a choice about where to sit. Sometimes, you just sit where you get a place, and try to go with the flow. If you’re in the silent zone, you let your fingers glide over the keyboard instead of pounding away, and if you end up in the group zone on the top floor, you pull out your headphones and try not to eavesdrop on the guys next to you who are discussing the movie they saw over the weekend. 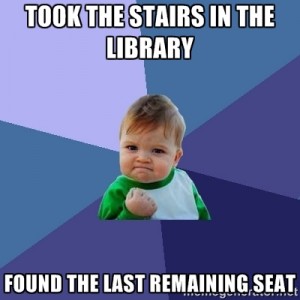 Once you have managed to find a seat, you sink into the chair, relieved, wiping the sweat from your brow. The battle is won. But then the real war is still to be fought: the paper/essay/reading that brought you there on a Sunday afternoon!

The journey back “home” 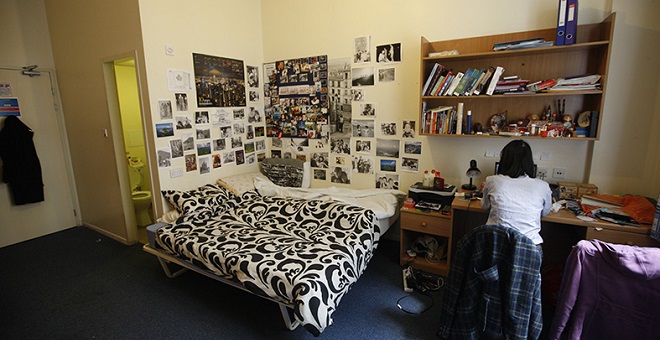 How to Pick Your Student Accommodation