Miguel de Beistegui on the changing role of desire

Desire is everywhere—everywhere recognized, displayed, discussed, and drawn upon. It is so much part of our lives, so deeply entrenched in our bodies and minds—so ‘hard-wired’ into our brains, some would say—that we cannot imagine a life without it; indeed, we cannot imagine what it could mean to live without experiencing its force and appeal, but also the conflicts and struggles it gives rise to. The law of desire is one by which we live. Of course, erotic desire and sexuality immediately come to mind. But look a bit further afield and you will realise that our experience of desire is not limited to the sphere of sexuality. It is also a basic mechanism of our economic machine, if not the very force that propels it. This view—this economic and cultural programme—is one that Paul Mazur, a banker working for Lehman Brothers, expressed very clearly, almost one hundred years ago, in an article published in the Harvard Business Review: ‘We must shift America from a needs- to a desires-culture. People must be trained to desire, to want new things, even before the old have been entirely consumed […] Man’s desires must overshadow his needs’. As we now know, this goal was fulfilled beyond Mazur’s wildest dreams. Contemporary capitalism, it would seem, is increasingly in the business of capturing our existing desires, and generating new ones. And then there is popular culture. There is this obsession with obsession, with primal, violent desires, which seek to exploit or abuse others, often sexually. There is our fascination with serial killers, sexual predators, and moral monsters. There is our endless curiosity for deviant and abnormal types, for what we call ‘perverse’ desires and ‘abnormal’ instincts. This is the ugly face of desire, its dark—we like to say ‘monstrous’ or ‘evil’—side.

As for desire itself, we seem to take it for granted. Its ubiquity, we claim, is a sign of its rootedness in human nature. We readily admit that it is a force we need to reckon with, and that it governs us, often beyond our own will; but we do not question that we are creatures—and not just subjects—of desire. What are we to make, in that context, of the somewhat elliptical and puzzling remark that Michel Foucault made in the course of a discussion at the University of Berkeley in 1983, according to which western civilisation is the civilization of desire? We might find this suggestion needlessly provocative. To the extent, as we tend to believe, that desire is a constitutive feature of ‘human nature’, aren’t all civilizations by definition civilizations of desire? Isn’t desire so bound up with who we are that the very suggestion that civilization itself—any civilization—not be its expression, that is, not recognize it, integrate it, organize it, in short, deal with it in some way, can only come across as fanciful?

Following Foucault’s provocation, I want to suggest that our culture of desire has an origin and a history, and a very western history at that. In a lecture course at the Collège de France from 1981, entitled ‘Subjectivity and Truth‘, Foucault traces it back to the Hellenistic and early Christian period. His main claim, which I won’t explore here, is that in matters relating to what we would today call sexuality, a crucial transformation took place: an ethics of pleasure—based on certain acts, and the circumstances in which and the partners with which they were carried out—progressively gave way to an ethics of desire, focused on the intention preceding the act, the degree of resistance or complacency with which it was met, and the intensity with which it was felt. Naturally, this shift required new technologies of the self: techniques of self-examination and interpretation, as well as new ways of relating to, and disciplining, one’s body.

But I feel that, beginning in the eighteenth century and coextensive with the birth of liberalism, our civilization of desire underwent a new turn: from an object of government, it became a key mechanism or instrument through which subjects learned to govern themselves and others. In fact, I suggest that desire became a cornerstone of what Foucault calls ‘modern governmentality’. Minimally, governmentality coincides with a system of norms, or a normativity, which needs to be distinguished rigorously from the order of interdiction and the power of the law, around which, so often and for so long, the problem of government and, more generally, that of power were (and still are) articulated. Traditionally, power is understood as the prerogative of the sovereign, and according to a division between the licit and the illicit. My claim, then, is that in a period that stretched between the eighteenth and nineteenth century, desire was normalized, that is, inscribed within new rationalities aimed at distinguishing a normal behaviour from an abnormal one and at inventing techniques (including therapeutic) of normalization, operating at the level of the individual. What rationalities do I have in mind?

There is, to begin with, and most obviously, the science of sexuality, which generated most of the typology through which we continue to identify ourselves as sexual beings today. It is a remarkable fact that we identify who we are, our sense of self, and our intimate identity on the basis of concepts and categories that were initially defined as clinical deviations (also known as perversions) from a normal (and ideal) sexual type (heterosexual, genital, procreative). These categories and concepts gave birth to techniques of education and discipline, to an entire orthopaedics of desire that is intrinsically normative. We need to ask about how we arrived at the situation in which, to use Foucault’s own words, ‘the constitution of the self is largely determined by the way in which people relate to their own sexuality’, and the manner in which ‘desire’ and ‘sexuality’ became closely identified. We need to analyse the manner in which desire was naturalized and normalized (normalized through its naturalization), that is, how it was integrated into the analytics and mechanism of sexuality to the point of making sexuality eminently desirable.

Besides sexual desire, we need to acknowledge the central role and status of desire in the equally normative discourse of political economy—which predates the emergence of the scientia sexualis, but not by much—and, more importantly still, in the transformation and expansion of the market. We need to recognize the manner in which, under the liberal, market-driven paradigm, desire was rehabilitated and recognized as an irreducible and necessary engine of agency, but only in the form of economic self-interest, motive, and utility.

With the advent of a liberal political economy, and the transformation of the role of the market, the nature of the relation between ‘desire’ and ‘government’ changed quite radically: contrary to what happened under the specifically Christian problematic of the flesh, concupiscence, and sin—which saw desire as the object of government or as that over which one needed to exercise one’s sovereignty and will—the force of desire is now seen as the very mechanism of government itself. One no longer governs oneself (or others) against one’s own desires, but with them, by allowing them to flourish within the very specific, yet constantly expanding, space of the market. Desire is no longer a force to be controlled, dominated, or punished, but mobilized, used, or channelled, as Mazur understood very well. From an essentially therapeutic strategy of domination and control, we have moved to a strategy of enhancement and maximization, that is, of management. Desire is naturalized, and seen as a form of positive energy, that is, as a spontaneous mechanism generating its own norms. But it also requires its technicians, which make sure that desires are created, organized, and distributed according to economic coordinates.

The third and final rationality that, I suggest, constitutes us as subjects of desire can be traced back to a period that stretches from Rousseau to Hegel, and led to the social and political struggles, as well as the new legislation, which have shaped our own present. This is the rationality that connects desire with recognition—with the desire to be acknowledged and count for something, to be recognized as a being or a group with a certain worth or dignity. It is the desire to be recognized not as, say, brave, honourable, or magnanimous, but as intrinsically worthy of respect. It is the desire for universal recognition. My claim is that recognition constitutes yet another normative framework within which subjects of desire govern themselves today, one that often operates through the law and takes the form of a struggle for equal rights, but also, and perhaps even primarily, through other more symbolic mechanisms, oriented towards self-esteem. While contemporaneous with the birth of the physiocratic and utilitarian liberalism of self-interest and utility, this regime of desire actually constitutes another parallel, and possibly more ‘continental’, form of liberalism, at least originally. In many ways, the desire for recognition is the bridge between liberal economics and liberal politics, that is, between the rationality of self-interest and that of the struggle for self-esteem, self-worth, and dignity.

Image credit: Georg Scholz, ‘I shop – therefore I am‘

This essay is based on the chapter ‘The Government of Desire’ by Miguel de Beistegui, in Foucault and the Making of Subjects, edited by Laura Cremonesi, Orazio Irrera, Daniele Lorenzini, and Martina Tazzioli (Rowman & Littlefield, 2016).

Miguel de Beistegui is a Lecturer in Philosophy at the University of Warwick. His research focuses on twentieth-century French and German philosophy, but also attempts to bring together the various branches of philosophy and other disciplines in order to better engage with the issues of our time. 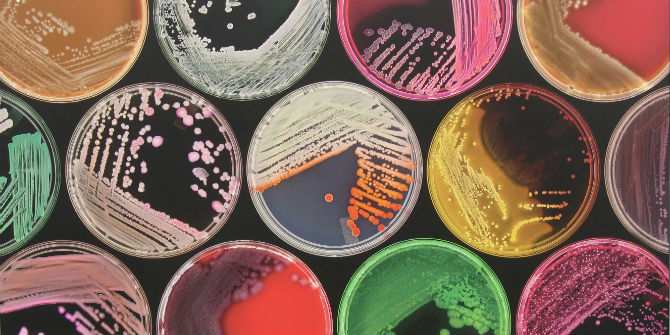