Crime remains a persistent challenge in many cities in the United States and worldwide. Solutions to this problem require a multi-faceted approach. Recent studies conducted in cities across the United States suggest that urban greening, including planting more trees and other vegetation, could be a relatively low-cost contributor to reducing crime.

Traditionally, law enforcement agencies thought vegetation contributed to crime, by obstructing surveillance and providing cover for criminals. However, recent studies using crime data from police reports and other sources have found the opposite may be true. A 2001 study of a public housing development in Chicago was the first to link vegetation with actual counts of crime from police reports. Greater vegetation surrounding apartment buildings, as measured via aerial and ground-level photographs, was associated with fewer reports of total, property and violent crimes, even after controlling for confounding factors (e.g., number of apartments per building, vacancy rate, building height). Recent studies in Baltimore, Maryland, and Philadelphia, Pennsylvania have replicated the Chicago results using high-resolution aerial imagery to measure vegetation and more sophisticated statistics to account for spatial dependency since crime tends to cluster around nearby neighborhoods.

We set out to see if earlier research is generalizable to medium-sized cities by examining the association between vegetation and crime in New Haven, Connecticut, a city with a population of 130,000 people and a crime rate of 65 crimes per 1,000 people, or 2.7 times the state rate and 2.0 times the national rate. Known as the Elm City, New Haven is home to 32,000 street trees and parks covering 2,200 acres. Approximately 38 percent of all land is covered by tree canopy, slightly higher than the average tree canopy cover for US cities of similar size. Our study draws upon the advanced statistical and spatial methodologies used in Baltimore and Philadelphia and is the first to apply these techniques to crime reporting from the Federal Bureau of Investigation’s Uniform Crime Report (UCR). Our crime outcomes include property crimes (burglary, theft, motor vehicle theft and arson) and violent crimes (murder, rape, robbery and assault) and provide a nationally replicable measure of crime that is consistent with criminology and economic literature on differential incentives and deterrents to property and violent crime.

Results from our analyses showed that for every 10 percent increase in tree canopy cover there was a 15 percent decrease in the violent crime rate and a 14 percent decrease the property crime rate. We controlled for socio-economic factors, including neighborhood-level educational attainment, median household income, racial/ethnic composition, population density, vacancies and renter-occupied housing, suggesting that our results are not confounded by higher socio-economic neighborhoods having more trees. Maps of tree canopy cover and crime (see Figure 1) clearly showed that neighborhoods with more tree canopy cover tended to have less violent, property and total crime. While we did not identify a causal relationship between trees and crime in our study area, prior research suggests that vegetation may offer crime-reducing benefits through three main mechanisms. First, green spaces attract people for recreation and other activities, leading to more “eyes on the street,” which provides actual surveillance. Second, trees offer attractive landscaping that acts as implied surveillance or a “cue to care” by demonstrating to potential criminal threats that residents pay attention to and care about their neighborhood. Third, trees and the presence of nature has been shown to reduce mental fatigue, a precursor to violent behavior. 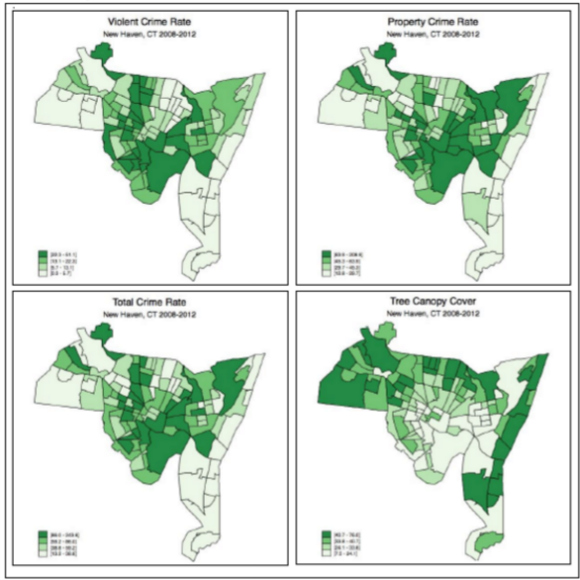 Notes: Darker shading indicates more crime or more tree canopy cover;  Crime rates represent average number of crimes annually from 2008-2012 per 1,000 residents;  Tree canopy cover is measured as the percent of ground that is covered by leaves and branches of trees when viewed from above.

Our study expands previous research on trees and crime in major cities to a medium-sized city known for its high crime rate. We found strong evidence that more trees are associated with lower rates of both violent and property crime. We can confidently add crime-fighting to the growing list of benefits associated with urban trees such as air pollution removal, cooler temperatures, and capture of rainfall thereby reducing storm water runoff. City residents often express far more concern about crime and quality of life issues rather than issues of environmental quality, suggesting that our new evidence can play an important role in swaying voters- as well as proponents of urban greening, law enforcement officials and city leaders to plant more trees to benefit both crime prevention and urban ecosystems.

Future studies should examine changes in tree canopy cover and crime over time and test for potential mediators, including social cohesion and park use, to help to clarify the relationship between trees and crime. In addition, looking at the relationship between the quality of trees (e.g. street trees versus park trees or tall trees versus shrubs) and crime could provide insight into the most effective ways to use urban greening to reduce crime. Such studies could bolster support for urban greening as a crime reducing strategy.

This article is based on the paper, ‘Greater tree canopy cover is associated with lower rates of both violent and property crime in New Haven, CT’, in Landscape and Urban Planning.

Spencer R. Meyer – Yale University
Spencer Meyer is NatureNet Fellow in the Yale School of Forestry and Environmental Studies, and collaborates closely with The Nature Conservancy. He is a conservation scientist and forester, whose current research explores how innovative conservation finance and economic incentives can be used to advance conservation strategies that protect nature and the ecosystem services on which humans depend. His publications cover a range of conservation topics including land use scenario planning, spatio-temporal patterns of land protection, stakeholder engagement, and conservation finance. He tweets at @SpencerRMeyer.