The most important political orientation for citizens in a democracy is their partisanship.  Partisanship is the orientation that nearly all citizens possess, and powerfully shapes vote choice, influences the adoption of issue positions, and shapes perceptions of the economy and foreign policy events.  American Indians are an understudied population in the US with regard to their partisan orientations.  In recent years survey researchers have given attention to the political orientations and behaviors of Hispanics and Asians, conducting surveys with samples of sufficient size to permit the application of rigorous statistical techniques to analyze their political attitudes and behavior.  No such effort has been directed American Indians.  In new research, I find that American Indians are less likely to claim a partisanship compared to other racial groups, and that when they do they align themselves with the Democratic Party.

American Indians hold a special place in American history, but have a complicated relationship with American society and government.  US law guarantees American Indians sovereign status, providing them with special protections and provisions that allow them to maintain a degree of separateness from US law and society but at the same time lowering their level of assimilation into American society.  Some scholars argue sovereignty signifies preservation of Native American cultural distinctiveness, and some activists claim that laws passed by the US and state governments do not have standing on Indian reservations.  Income taxes and sales taxes are not collected for work or transactions conducted on US Indian reservations.

Prior research suggests two expectations for the partisanship of American Indians.  First, given they are a minority group living in impoverished conditions (high rates of poverty, low levels of educational attainment) one expects American Indians to identify with the Democratic Party as that party generally portrays itself as holding policy positions that benefit the disadvantaged.  Second, given that sovereignty calls for American Indians to maintain some level of separation from American society they should be less likely to adopt identification with a major American political party compared to Caucasians and African-Americans, and perhaps even more so than Hispanics and Asians.

An obstacle to examination of partisanship and non-partisanship among American Indians is the absence of surveys of sufficient size. Here I utilize survey data from the 2004 and 2008 National Annenberg Election Studies (NAES).  These surveys include a large number of respondents (81,422 in 2004, 57,967 in 2008).  While American Indians constitute one to two percent of the US population, when combined these two surveys yield a sample of 1616 American Indians who claim US citizenship, permitting the application of rigorous statistical techniques for analysis of their partisanship or lack thereof.

NAES utilizes the standard seven-point measure of partisanship developed by the American National Elections Studies.  Respondents are first queried as to whether they consider themselves a Democrat, Republican, Independent, or something else (referred to here as “other non-identifier” to distinguish them from pure independent status).  Respondents who indicate they define themselves as an independent are then asked whether they lean Democrat or Republican; those who identify themselves as Republican or Democrat are asked whether they consider themselves strong or weak with respect to their partisan identification.  These data are shown in Figure 1 below: 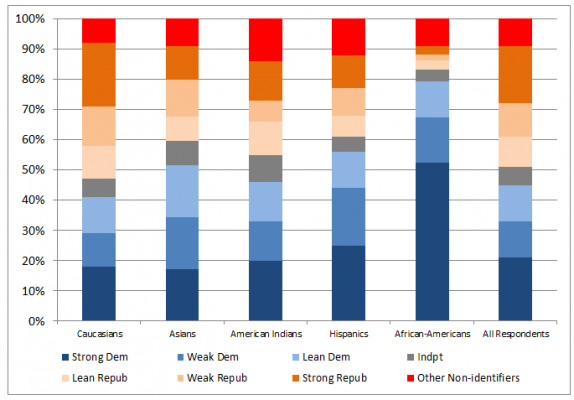 In a multinomial analysis, and controlling for other factors that might influence partisanship, I found that being an American Indian increases the likelihood of claiming Democratic identification rather than Republican identification by 6 percent, an effect equivalent to being female or Hispanic.  Similarly, after controlling for other demographic variables, being a Native American increased the probability of not identifying with a major US political party by 5 percent, greater than the impact of being Hispanic or Asian, 1 percent and .5 percent, respectively.

The lower levels of partisanship among American Indians is most likely attributed to their limited incorporation into American society.  The lack of assimilation is partly by choice as American Indians, like many other immigrant groups to the United States, have sought to maintain their cultural distinctiveness,  and have likely been aided in that quest by the reservation system.  At the same time, one can question the willingness of mainstream American society to accept Native Americans; a history of racial discrimination also likely contributes to separateness, and the corresponding lower levels of partisanship and political participation.  The lower rates of assimilation are reflected in lower rates of voter turnout.  The turnout rate for American Indians according to the 2008 US census for that year’s presidential election was 47.5 percent, while the national turnout rate was 63.9 percent.

This blog post is based on the article “Partisanship and Non-Partisanship among American Indians” forthcoming in American Politics Research.