In the lead up to the 2016 election, many commentators argued that Donald Trump’s personality and actions would encourage many voters to cross party lines or to stay home. That was emphatically not the case, with Republicans generally voting for Trump as they would any other GOP candidate. Using data from a Voting Advice Application, Diego Garzia and Lorenzo Cicchi write that while partisanship was important in the election, their initial results show that policy issues – such as the repeal of Obamacare – were important to voters as well.

The 2016 election has been widely described as the most unusual US Presidential elections of modern times. The two major candidates selected in the primaries, their campaigning strategies and – most notably – the final election outcome surprised many. However, as preliminary exit-poll data shows, the results did not deviate from customary voting patterns in US elections. At the end of the day, most partisans seemed to come home to vote for their party, virtually regardless of the candidates. Calling into question the role of party identification as a viable guide for meaningful voting choice, scholars like Russ Dalton advanced the possibility that such long-standing feelings of closeness to a party can, at occasions, turn into “blinders that keep voters from seeing events and the candidates objectively”.

But to what extent did Americans actually vote along partisan lines regardless of their own policy preferences in 2016? Was candidate choice merely based on the enduring ability of partisanship to shape short-term feelings about candidates regardless of their actual political stances? While an answer based on ANES (American National Election Study) data – the traditional workhorse of public opinion scholars – will have to wait until spring 2017 due to data restrictions, we are able to rely on the data generated by Societly, an online Voting Advice Application (VAA) that served over four hundred thousand American voters in the campaign leading to the 2016 US Presidential election.

VAAs are, in a nutshell, online tools that support users in their voting choice through a comparison between their policy preferences and the policy positions of the candidates (a more detailed discussion of VAAs, their historical trajectory and their political relevance in Europe can be found here).

The questionnaire administered to users comprised twenty concrete policy statements (e.g., “Access to abortion should become more restricted”; for the full list, see Table 1). For each of these statements, users had the chance to position themselves on a 5-point scale ranging from “Completely Disagree” to “Completely Agree”, plus a “No Opinion” option. Besides the detailed issue positions of the users, the Societly dataset features background information about their socio-demographic profile, their favorability towards the Presidential candidates as well as the strength of their party identification.

The statistical analysis of these data highlights a number of interesting findings. First of all, we are able to confirm the importance of partisanship, as half of the variance in candidate support is accounted by party identification alone. This, however, does not appear to be the end of the story…

If we add users’ issue preferences in the regression model, the explanatory power rises by twenty percent, with virtually all issue preferences’ parameters achieving conventional levels of statistical significance. In terms of the magnitude of their impact on candidate support, Figure 1 plots the marginal effect of issue preferences on the support for each of the candidates. Values have to be interpreted as the percentage increase in the predicted probability of supporting each of the two main candidates moving from “Completely Disagree” to “Completely Agree” on each of the issues included in the questionnaire. Values relative to Clinton are presented in blue, while those relative to Trump are shown in red. 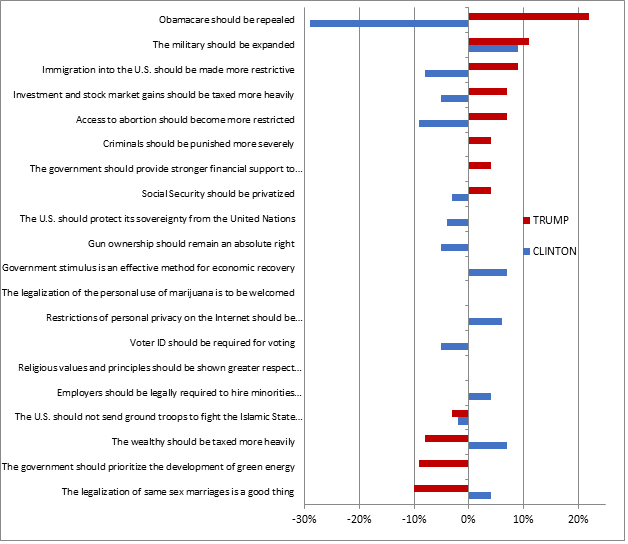 According to our results, the issue that seems to have mattered the most is undoubtedly the proposal to repeal the Affordable Care Act (Obamacare). Net of their pre-existing partisan predispositions, users marking their complete agreement with the proposal were 20 percent more likely to support Trump and about 30 percent less likely to support Clinton. Other issues that emerge from our analysis as extremely divisive include a more restrictive immigration policy, a pro-life change in abortion laws, and an adverse take on the idea that the wealthy should be taxed more heavily. In all three cases, support for these policies resulted in a circa 10 percent increase in the support for the GOP candidate and a comparable decrease in support for the Democratic candidate.

While awaiting for the release of traditional representative survey data to validate these preliminary conclusions, we cannot avoid highlighting that the issues that mattered the most for US voters during the campaign also correspond to those that Donald J. Trump placed on top of the agenda for the first week of his presidency. His very first act as President on January 20th was, indeed, the signing of an Executive Order directing federal agencies to begin preparing “to ease the burden of Obamacare”, and the subsequent (extremely controversial) one on January 27th halted travel from seven Muslim-majority countries and suspended the country’s entire refugee program, including those covering work visas. To future empirical research goes the task of disentangling the likely pattern of reciprocal causation between socio-cultural attitudes and partisanship in the 2016 presidential election. If anything, these preliminary results will be helpful in underlining the independent importance of issues on top of the (still enduring) centrality of party identification in American voters’ choice.

Diego Garzia – University of Lucerne, Swizterland
Diego Garzia is Senior Research Fellow at the University of Lucerne, Switzerland. His research interests include elections, political leadership and voting behavior in comparative perspective. His most recent books are Personalization of Politics and Electoral Change (Palgrave Macmillan, 2014) and Matching Voters with Parties and Candidates (co-edited with Stefan Marschall, ECPR Press, 2014).

Trump may be behind in the polls, but the 2020 election is far from over