While it is often overshadowed by concerns about climate change, air quality is still an important issue which affects a large number of Americans. Luke Fowler looks at the role of government in managing air quality, writing that while large scale state and federal programs and partnerships exist, there are often gaps in their coverage. Local governments, in turn, can feel pressure from their citizens to step in and fill those gaps. He finds that smaller municipalities often struggle to have an impact on air quality, especially if their coverage area is geographically large.

Though traditional environmental issues have taken a backseat to climate change, air quality is still a contentious policy concern in both developed and undeveloped nations;   President Trump’s first budget proposes slashing the budget for the Environmental Protection Agency (EPA) by more than 30 percent. In the US, the Clean Air Act (CAA) of 1970, and subsequent amendments in 1977 and 1990, constitutes a significant portion of the environmental mission of American governments.  According to a 2011 EPA study, the 1990 amendments cost taxpayers an estimated $65 billion but yielded an estimated $2 trillion in economic benefits.  Like most federal environmental programs, it relies on an intergovernmental partnership where the EPA sets the National Ambient Air Quality Standards (NAAQS) and states implement and manage day-to-day operations in order to bring all Air Quality Control Regions (AQCR) into compliance.  Based on the NAAQS, the air quality index (AQI) is a standardized measure of pollutant concentration for each AQCR, ranging from 0 to 500 with six color coded categories associated with threat levels. 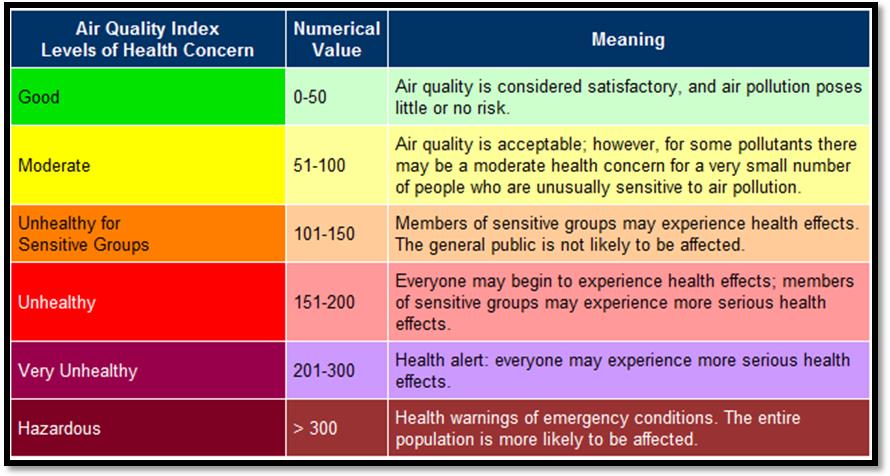 The intergovernmental partnership is generally considered effective in improving air quality as it allows implementation plans to be curtailed to social, economic, and political needs of localities.  While local governments play a major role in the modern era of federalism, they have been overlooked when it comes to air quality by both policymakers and scholars.  Local government roles tend to be highly variable, and depend largely on State Implementation Plans (SIPs).  Nevertheless, many local governments are now taking on innovative policies to address local air quality, outside the traditional framework crafted by the CAA decades ago.

The impetus for local innovation comes from two sources: 1) in response to competitive pressure; and 2) to the fill the gaps in state efforts.  While competition in a federal system is complex, local governments innovate in response to initiatives from neighboring cities or to mimic larger cities.  In the last several decades, environmental quality is a growing quality-of-life issue due to both health impacts and more eco-friendly beliefs.  To stay competitive, local governments innovate to maintain environmental quality, or risk losing environmentally conscious citizens and businesses to neighboring areas.  Additionally, in the US, states are the linchpins in providing public services.  However, states are not always effective in creating locally desired policy outcomes, so local governments are pressured to compensate.  There is a virtual library of research exploring how state-level political, socio-economic, and institutional arrangements affect CAA implementation, and in essence attempt to explain why some states are better at it than others.  When states are less effective in managing air quality, local governments feel pressure from citizens to step into that role and take on more responsibility.  The result of these two non-mutually exclusive impetuses is that local governments are playing a more active role than ever in managing air quality, even though they are rarely recognized in this capacity.

Figure 2 – States With and Without Local Air Quality Agencies 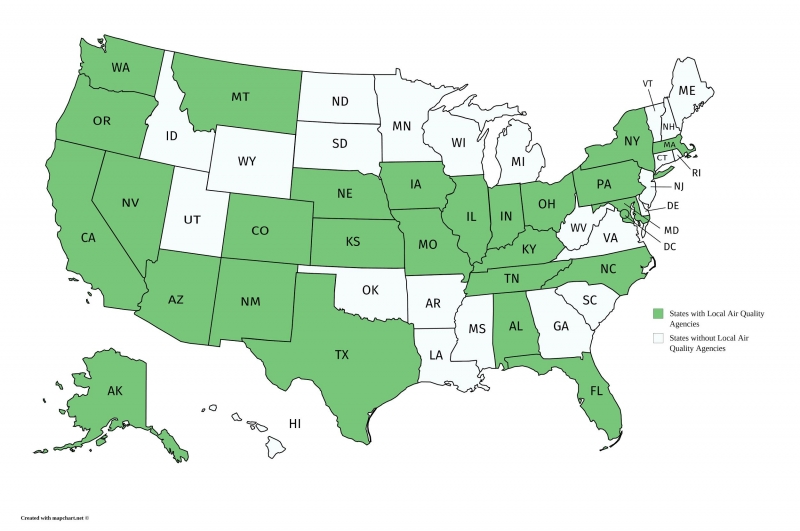 Using a dataset of 369 Metropolitan and Micropolitan Statistical Areas in the US that serve as AQCRs, I was able to test the effects of local policy innovation on air quality outcomes.  My findings indicate that local governments are generally effective in reducing the portion of days each year in which the AQI exceeds 100.  However, effectiveness is driven largely by their scope of operations.  Principal municipalities (i.e., incorporated local government with the largest citizen population in a metropolitan area) have a more substantively and statistically significant impact on air quality outcomes than non-principal municipalities.  In effect, smaller local governments simply do not have the capacity to impact air quality across a metropolitan area.  There is after all a reason why states are vested with the primary responsibility for managing air quality, since it requires a regional approach to manage an environmental problem that does not conform to jurisdictional boundaries.

Larger local municipalities, though, have the requisite capacity in many cases.  For instance, Lincoln-Lancaster County in Nebraska utilizes municipal engineers to work with private businesses to reduce emissions.  Within their jurisdiction is more than 95 percent of the non-farm earnings in the metropolitan area; or in other terms, 95 percent of air pollutant stationary sources.  While there are nearly a dozen other communities in the area, none have the scope of operations to have any impact on regional air quality.  This is a familiar story in many metropolitan areas where the largest cities have within their jurisdiction and regulatory control the lion’s share of pollutant sources.

Local governments are hidden but important partners in air quality.  While largely overlooked by policymakers and scholars, municipalities are undertaking a wide range of initiatives that are creating better policy outcomes.  Being able to innovate based on local social, economic, and political needs is a powerful tool in serving the public.  In fact, it is the entire basis of the CAA partnership framework.  Capacity is key to being effective, though.  It is impossible for local agencies serving a small portion of a regional area to unilaterally combat a “wicked problem” such as air quality.  Larger local governments or states are best poised to do so.

However, smaller local agencies can still play a role.  For them, cooperation is necessary to expand capacity and effectively encompass the problem.  An example of these type of cooperative arrangements is the Dane County (WI) Clean Air Coalition which is a public-private partnership between businesses, schools, state and local governments, and other organizations to coordinate clean air awareness outreach programs, vehicle emissions reduction projects, and energy efficiency initiatives.  The Chicago (IL) Clean Air Task Force and Forysth County’s (NC) Mobile Source Group use a similar arrangement to coordinate efforts across regional governments and economic sectors in order to maximize impact.  While my research has added to a growing body of scholarship on networks and policy innovations in environmental governance, there are still many questions to be asked about local government roles in environmental management.