In the Indian Ocean, Australian border patrols intercept 41 Sri Lankan asylum seekers and return them straight back to their home country. In the Mediterranean, the Italian navy rescues more than 2,600 migrants over one single weekend as the number of tragedies and disappearances at sea keep mounting. At the US-Mexico border, the arrival of thousands of unaccompanied minors is creating a moral panic and a headache for Obama. What on earth is happening at the rich world’s borders? And why do the migrants and refugees keep coming – despite the enormous investments in tougher controls over recent years?

In the mainstream media, so-called “illegal” migration across sea and land borders appears as a recurrent spectacle, a blip on the evening news. The visual cues are now familiar: boats heaving with human cargo, coffins in port, migrants blankly staring out through a fence. Some citizens and politicians, distressed by these images, call for an end to the suffering; others see in them a menace, and want ever tougher and more militarised controls. Still others turn a blind eye and prefer to forget, the misery safely contained by the borders. Or as Pope Francis said last year on the tragedy-haunted Italian island of Lampedusa: “We have become used to the suffering of others…It doesn’t affect us. It doesn’t interest us. It’s not our business.”

Irregular migration may not be our “business”, yet as I show in my book, Illegality, Inc., it is certainly the business of others. A range of sectors are fast at work at the European southern borders – among them, European and African border forces, NGOs and international organisations, defence contractors and policy institutes. And this “illegality industry” at the border feeds on the two wildly different reactions provoked by the evening news – that is, compassion and horror – while being shielded by the wider indifference to the misery at the frontiers.

In less emotive language, advanced border control initiatives of the kind seen in Europe, Australia and the United States of America are simultaneously supposed to save people’s lives and stop or push them back. Increasingly they achieve this double goal by recourse to two potent tropes: humanitarianism and human smuggling.

Spain, the focus of my research and long in the vanguard of European border controls, illustrates these two-faced controls well. In the past decade, Madrid has carried out joint patrols with West African states in order to intercept migrant boats. The motivation? To “prevent people from leaving” and so avoid them putting their lives at risk. At the same time, in both West and North Africa, Spanish police collaboration has also been justified as a battle against the “mafias” presumably bringing sub-Saharan migrants across the seas or towards the towering border fences of Spain’s North African enclaves, Ceuta and Melilla.

Elsewhere, similar patterns repeat. Australia’s draconian military-led Operation Sovereign Borders, which intercepted and handed over the 41 Sri Lankan asylum seekers well beyond Australian waters, is advertised as a means to “stop people smugglers and stop further loss of life at sea”. In the United States, the arrival of Central American children has been billed both a “humanitarian crisis” and a security problem centred on human smuggling, leading to calls for even tougher controls. In Italy’s Mare Nostrum patrolling operation off Lampedusa, search-and-rescue is the ostensible aim – winning plaudits for the country’s navy – yet it has also allowed for the targeting of suspected smugglers and extending controls into ever larger areas at sea. In this it mirrors Europe’s new external border surveillance system (Eurosur), which has the triple aim of fighting migration, combating cross-border crime and saving human lives – three tasks that in practice amount to much the same thing: intercepting or rescuing migrants while detaining their supposed smugglers.

It is true that many border guards have carried out difficult rescue efforts, often together with the Red Cross, national sea rescue agencies, and fishermen or commercial vessels. It is also true that increasingly vicious breeds of smugglers are profiting from the sea passage, and have to be prosecuted. Yet while the double motivation for border controls – to stop smugglers and save lives – may work as public, legal and financial justification for further controls, it crumbles under scrutiny. For the controls lead to precisely what they are supposed to prevent: more smuggling and further misery.

The Spanish case is again instructive here. The Spanish-led patrols along the African Atlantic seaboard halted the boats, yet by doing so displaced routes towards longer and more dangerous crossings. In North Africa, the intense co-operation with Moroccan forces and Spain’s installation of an advanced coastal surveillance system has had a similar effect. These measures have also thrown a lifeline to smugglers, who see increased demand for their services as crossing without professional assistance becomes too difficult. Sensing a new business opportunity, some smuggling rings have even resorted to taking the stranded migrants hostage, much like has happened in Mexico and beyond Israel’s frontiers. In short, “unscrupulous smugglers” that officials invoke are multiplying, thanks to the very controls supposed to fight them. Border controls are in this sense productive, constantly creating new and more dangerous forms of entry, along with new roles for migrants and smugglers alike.

Amid the ensuing spectacle at the frontiers, two simple points are usually forgotten: only a tiny fraction of all migrants enter Europe by sea and land, while the vast majority of the world’s refugees remain in poor countries, not at the rich world’s gates. Yet it is not the statistical but the political and media impact of arrivals that defines the official response. In fighting smugglers and saving lives, the two-faced controls at the border in this sense have one rather simple overarching aim: to halt the migrants well before they become a spectacle on the evening news, pushing them back towards oblivion.

In this, needless to say, they are also failing, and spectacularly so. Yet their very failure triggers calls for even more investments in the illegality industry from the media, politicians and the industry’s actors themselves. Defence companies lobby for new technological “solutions” in Brussels; border guards put forward flashy new surveillance projects; North African states, by subtly turning on and off the “tap” of arrivals, put pressure on their European partners; and the aid sector scrambles for whatever funds remain. Seen from this perspective, the principal “product” of the illegality industry then becomes, quite simply, its own perpetuation – with dire consequences at the rich world’s borders.

Illegality, Inc.: Clandestine Migration and the Business of Bordering Europe by Ruben Andersson is published by the University of California Press ISBN: 9780520282520

Ruben Andersson is a postdoctoral research fellow at the Department of International Development, London School of Economics and Political Science. 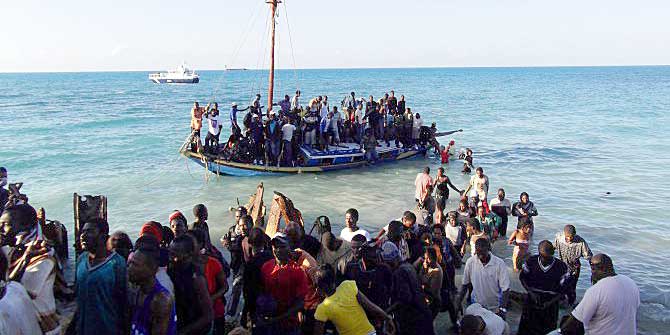 Bad Behavior has blocked 4256 access attempts in the last 7 days.