Ensuring soldiers have legal access to financial resources is crucial for the state to fulfil its primary mission: retain the monopoly of violence. As seen in the Democratic Republic of Congo, difficulties providing soldiers with adequate resources may result in deteriorating discipline, corruption, defection, and human rights abuses.

Rwanda after the genocide faced the difficult task of paying its soldiers. The post-1994 situation made this challenge inescapable. The Rwandan Patriotic Front (RPF) took power in a ruined country. The economy was entirely destroyed, and fleeing officials of the previous regime had emptied state coffers. The resources to pay soldiers were virtually non-existent. In addition, following the RPF victory, many families returned from exile to Rwanda. Consequently, soldiers of the Rwandan Patriotic Army (RPA, the armed wing of the RPF) were not just guerrilla fighters anymore: they became fathers, husbands, or brothers again. This new financial burden on soldiers’ shoulders created a form of indiscipline largely unknown until then in the RPA’s ranks. In addition, the meagre salaries were made in cash, transported by intermediaries from the Ministry of Defence to soldiers, which multiplied the opportunities for embezzlement and the creation of ‘ghost soldiers’. Worse, the opportunities for soldiers to borrow money were extremely limited at the time. Many had no property in Rwanda and consequently no collateral to offer to the few banks still functioning.

Indiscipline was not an option given the critical security situation in Rwanda. The RPA had to stretch its organisational capacity to the limit, waging war in Congo twice between 1996 and 2001 and fighting an insurgency in the Northwest of Rwanda in 1997-1998. As a consequence, it had to quickly integrate a large number of former enemies into its ranks: the ex-FAR (Force Armées Rwandaise, the army of the former genocidal regime) and different fighting militias. The inability to provide for these newly integrated recruits could have dire consequences.

The Rwandan response to these challenges was innovative and effective. It laid the foundations of an effective welfare system for soldiers. It also constituted a crucial, although largely ignored, factor in reintegrating different armed factions into the post-genocide national army.

The Rwandan innovation: a military bank

To address the difficult situation of soldiers’ welfare, the Ministry of Defence came up with an innovative solution. Inspired by the saving associations that emerged spontaneously in battalions as a response to soldiers’ financial difficulties, the Ministry instituted a microfinance cooperative called Zigama Credit and Savings Society, or Zigama (‘savings’ in Kinyarwanda) CSS. To this day, the system has worked as followed. All soldiers in the army are equal shareholders in Zigama-CSS. They all have an account where their salary is deposited each month. Savings are compulsory and take the form of a percentage directly deducted from pay each month, a kind of “save as you earn” model.

The advantages of such system are many. First, soldiers are provided with comparatively cheap loans. Whilst they might not be well paid, at least, thanks to the compulsory savings, soldiers have a decent access to finance from Zigama-CSS. The main benefit from the state point of view is it increases soldiers’ welfare while limiting the burden on the state budget.

Second, thanks to Zigama-CSS, Rwandan soldiers are paid on time. Even when the Ministry of Defence takes time to disburse money, the bank is able to pay soldiers by tapping its own reserves. This buffer was especially useful in the early 2000, when financial resources of the Rwandan state were low and irregular.

Thirdly, payments via bank accounts reduce embezzlement and graft, which were significant in the immediate years after the genocide. It removed middle-men in payment, consequent opportunities for embezzlement, and the possibility of creating ghost soldiers.

Lastly, and more importantly, Zigama-CSS has been a key tool in promoting financial literacy in the Rwandan army. One has to keep in mind the sociology of the RPA at the time: its members were predominantly young adults, if not teenagers, that had never had a salaried job, let alone taken out a loan. The sudden access to loans from Zigama-CSS in 1997 is an abundant source of anecdotes even today: one soldier spent a year’s loan on rounds of drinks in one night; another used the entirety of their salary to repay their loan from Zigama-CSS to buy his family a house, forgetting to reserve money for his wife to survive while he was at the front.

In consequence, the military leadership quickly made Zigama-CSS as much as about educating soldiers in the use of money as lending it. The personnel of CSS tours the army twice a year to sensitize soldiers to the importance of saving and managing money. The bank also has a crucial role in helping soldiers devise sound business projects, unlike any other bank in Rwanda, especially for such a low-revenue clientele. If a soldier wants to build a house, Zigama-CSS will help him to write a budget,and plan the size of the house and material to be used.

Zigama-CSS is an undeniable success. In January 2013, the bank had 72,000 members and its assets totalled 90 billion Rwandan francs (about $145.5 million). Its credit recovery rate exceeds 98%. It has a network of 16 agencies in the country and communicates with soldiers through SMS and toll-free numbers. An impact study conducted in 2010 showed that over half of the soldiers bought or constructed a house with a loan from Zigama-CSS.

A key driver to reintegration in the new Rwandan army

Zigama-CSS is not just a clever system to pay soldiers on time and give them loans. In the exceptional situation of Rwanda following the genocide, it turned out to be a formidable instrument of soldiers’ integration in the new national army.

First, it created a de facto community of interest between soldiers, regardless of their rank or their origins in the RPA, the FAR, or other militias. As the capital of Zigama-CSS comes only from its members’ shares and savings, each soldier is a stakeholder in the smooth running of the bank. In addition, the bank creates a space for exchange and reinforces military esprit de corps. Devising a business project to be examined by Zigama-CSS becomes a shared experience between soldiers.

The second way Zigama-CSS helped integrate former enemies was by creating trust among ex-FAR and militia members. Mistrust toward the RPA was extremely high – many thought they would be cannon fodder for the RPF in Congo. Being able to pay these newly reintegrated fighters was key in building trust. After six months of fighting, a reintegrated soldier on leave would find his bank account with his full six months of salary. This soldier, when back with his family, would not been seen as the defeated fighter he once was but as a man still alive, wearing a uniform, with a sizeable sum of money. The ability of the Rwandan government to pay these people consistently turned these potential spoilers of peace into not bread earners and stakeholders in the new Rwandan army.

The story of how Rwanda was able to pay its soldiers on time and give them access to finance is not only a nice story about the Rwandan military. It is a story of state- and nation-building, possibly a best practice for other post-conflict situations. Zigama-CSS created de facto solidarity between yesterday’s enemies. It was a gateway to a normal life, to a monetized life for many young fighters, whether from the RPA or the militias. This highlights something superficially treated in the theories of peace-building and Security Sector Reform (SSR), which focusses on procedural aspects or the nature of governance bodies presiding over the security sector. Less is indeed written about soldiers’ financial welfare and how, when integrating fighters into a national army, to help them to adapt to a new life wildly different from the bush. The Rwandan case shows that part of their success lay in the capacity of the state not only to provide fighters with sufficient resources but also to teach them how to use these resources efficiently.

This post is part of a special series, ‘Violence and the State in Central Africa‘ on the Politics in Spires blog.

Benjamin Chemouni (b.h.chemouni@lse.ac.uk) is a PhD candidate at the department of International Development at London School of Economics and Political Science (LSE). His research is comparing Rwanda and Burundi state building trajectory. His recent publications include Explaining the Design of the Rwandan Decentralisation: elite vulnerability and the territorial repartition of power in the Journal of Eastern African Studies. This post is an overview of a paper soon to be submitted in a peer-reviewed journal. 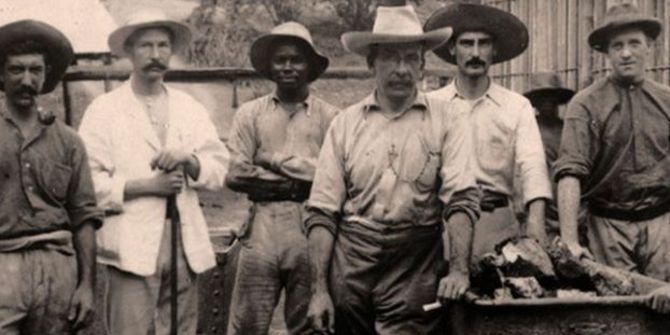 Bad Behavior has blocked 3755 access attempts in the last 7 days.