Though the issue of anti-foreigner violence in South Africa is receiving more attention, foreign nationals continue to be attacked while government practices make them increasingly vulnerable to victimisation at a time when anti-foreigner sentiment is rife, writes Alexandra Hiropoulos.

This post is part of the series African Perspectives on Migration looking at the theme of Intra-Africa migration.

While people around the world were making New Year’s resolutions and plans for 2016, migrants in South Africa were hoping for a year without victimisation. Resentment and mistreatment of foreign nationals are widely known in the West and especially Europe. Less well-known are anti-foreigner hostility and violence occurring in South Africa, the continent’s economic powerhouse.

But national and international attention is growing since South Africa’s large-scale outbursts of violence against foreigners in recent years. In 2008, 41 foreigners were killed over two months and at least four were killed within days in 2015. Both outbursts displaced over one hundred thousand migrants (many of whom are still too afraid to return to their homes), looted foreign-owned businesses and destroyed property worth millions of rand.

Less dramatic events are not uncommon. Migrants arriving in South Africa have faced hostility ever since the country’s transition to democracy in 1994. Foreigners are regularly and increasingly victimised across the country, often subjected to brutal attacks which are not officially recorded by police as xenophobic. Apart from large-scale attacks, mob violence continues to occur, as do isolated attacks on individuals and small groups of foreigners. Intimidation or looting campaigns targeting foreign-owned businesses also regularly occur and service delivery protests expressing grievances with the government’s provision of basic services such as water and electricity frequently involve the targeting of foreigners’ shops.

Since 1994, South Africa has become a major regional destination for international migration, whether for work or protection from political persecution, violence or natural disasters. In fact, until 2011, it was one of the highest recipients of asylum applications in the world (though less than 15% of applicants are actually granted refugee status). Most migrants come from within Africa, predominantly from Zimbabwe, Mozambique, the Democratic Republic of Congo, Angola, Somalia, Congo, Nigeria and Rwanda. Some also come from Asia, mainly China, India and Pakistan.

Because the quality of official data on migration is poor, most believe that entry into the country is both rampant and illegal. Contributing to this belief, government officials and media regularly exaggerate how many immigrants are present. Realistic estimates show that between 2 to 3 million non-nationals currently live in South Africa, including documented and undocumented individuals and refugees and asylum seekers. This accounts for around 4-5% of the country’s total population of approximately 54 million. Whether documented or undocumented, however, foreigners are frequently treated as “illegal aliens”. Surveys find that South Africans across race, class and gender lines hold deep-seated xenophobic attitudes.

Despite publicity about recurring violence as well as the systematic exclusion of foreigners from hospitals, schools and housing, the government does little to address the issue of violence against foreigners or their inability to access justice and police protection. In 2015, the government initiated Operation Fiela (meaning ‘sweep’ in Sesotho) to decrease crime and restore order in areas experiencing anti-foreigner violence. Most resulting arrests, however, were made during night raids on hostels alongside the army. Their constitutionality is currently being challenged for disproportionately targeting foreigners. Additionally, the government’s commitment to the program was undercut when, upon releasing the annual crime statistics in late 2015, both the Police Minister and Commissioner made unsubstantiated comments linking rising crime to the presence of foreign nationals.

Under these conditions, it is highly unlikely that anti-foreigner violence will decrease any time soon. Circumstances that perpetuate the occurrence of such violence, such as social and economic inequalities and unemployment, have been increasing. Furthermore, 2016 looks as though it will be characterised by an ongoing drought, water and electricity shortages, the FeesMustFall student movement, and local elections. Since local government officials have incited anti-foreigner violence in the past, it is feared that these elections will to lead to a rise in attacks, all while the government lacks an operational framework to coordinate interventions once attacks occur.

But there is still some reason for hope. Though the government appears unwilling and unable to deal with migrants’ needs at the national level, local municipalities (cities and towns) are exploring ways to enhance social cohesion among diverse groups of people. Academics and civil society are trying to create national reporting mechanisms to alert authorities about anti-foreigner violence and other hate crimes. They continue to monitor attacks to better understand why they occur where they do and to recommend preventive measures. Also, there are currently efforts to train police and other first responders about migrants’ rights and to improve coordination between police, civil society and United Nations agencies when attacks occur. However, in the absence of political will to tackle the issues head-on, foreigners in 2016 are likely to continue to live in fear.

Alexandra Hiropoulos is a postdoctoral fellow at the African Centre for Migration and Society at the University of the Witwatersrand in Johannesburg, South Africa. Follow her on Twitter @Alexoila. 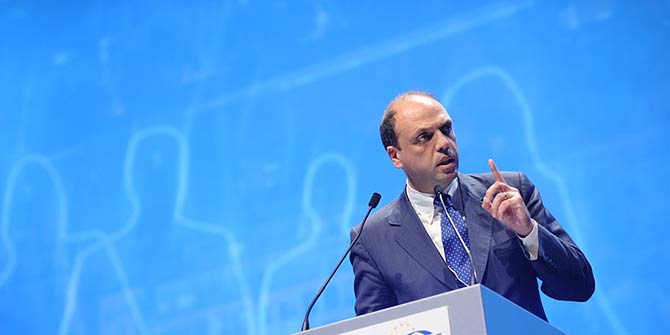 Bad Behavior has blocked 2248 access attempts in the last 7 days.