LSE’s Marc Davies analyses the state of South African politics as South Africa’s Leader of the Opposition Mmusi Maimane claims that disillusionment with the ruling African National Congress is rising.

South Africa’s ruling party – the African National Congress (ANC) – has “lost the moral high ground it once occupied, and voters increasingly view it as irredeemably corrupt and uncaring,” according to official opposition party leader Mmusi Maimane. Delivering a public lecture titled Protecting South Africa’s Fragile Democracy at LSE, the leader of the Democratic Alliance (DA) delivered a scathing assessment of political and institutional degeneration under President Jacob Zuma, arguing that voters may opt to shift their votes to alternative political parties in the country’s upcoming municipal elections.

Maimane claimed that personality and “big man” politics remain prevalent in “young and fragile” democracies like South Africa, and accused the incumbent president of leading a “systematic assault on democratic institutions” during his term in office which commenced in 2009. “We all see the risk looming of a kind of shell state, in which power is exercised as theatre merely to perpetuate the image of power. Behind the dark tinted windows, it’s just a hollowed out, parasitically-corrupt mess,” he said.

Constitutional rule and the power of the executive

While asserting the “critical importance” of building resilient democratic institutions in weak or precarious democracies, Maimane amplified the necessity of principled leadership in building those institutions which he says is the “defining variable” for young democracies. He said the problem of poor leadership in South Africa captures a fault in the country’s Constitution which grants immense power to the Executive. “It was a constitution authored for a President of the calibre of Nelson Mandela, not for one as dishonourable as Jacob Zuma, and we have learnt that a constitution should be framed to withstand the worst leaders, not assume the best,” he remarked.

Despite the ‘threats’ to the country’s democracy, Maimane was emphatic that he has “never been more positive about the future of South Africa” than at present. Alluding to a judgement made in March against the President in the Constitutional Court  – which found him in violation of his oath of office and the Constitution relating to the construction of a large private homestead in Nkandla at the public’s expense – Maimane said the judgement reflected a Constitution capable of enacting checks and balances.

Is the DA a viable opposition force?

The DA, then the Democratic Party, attracted a meagre 1.7 per cent of the national vote in South Africa’s landmark 1994 election in which the ANC with Nelson Mandela at the helm triumphed with 62 per cent. Twenty years on, the DA achieved 22% at polls in the 2014 national election and has governed the Western Cape province since 2009, accumulating a dominant 59 per cent of the 2014 provincial vote.  Notwithstanding its substantial growth in support within the electorate, the ANC by contrast remains the dominant political party in South Africa by leaps and bounds, consistently maintaining above 60 per cent of the national vote.

While struggling to expand its footprint especially in rural areas and most of the ANC’s historical strongholds, the DA has fought to unseat the ANC in at least three major urban metros:  Tshwane, Johannesburg and Nelson Mandela Bay. An independent poll conducted by Ipsos SA in June suggests these three key metros are well within reach for the DA, and indeed its past performance in Nelson Mandela Bay suggests such an outcome is possible there. Political analyst Steven Friedman, however, has noted previously that election predictions – through polls or ‘back-of-the-envelope guesses’ by analysts – have been largely unreliable and tend to overstate the challenge opposition parties pose to the ANC.

Youth politics and the radical turn

Describing the country’s newest political party, the Economic Freedom Fighters (EFF), as a “government in waiting”, charismatic leader Julius Malema has remarked that the EFF would unseat the DA as the official opposition by 2019. Malema – formerly the President of the ANC Youth League before his expulsion in 2011 for “sowing divisions” in the party – led the EFF to obtain 6.3 per cent of the national vote in 2014. Though approximately three million votes short of the DA’s 2014 tally, the EFF had come into existence only 10 months prior to the election while the DA’s growth historically has been much more gradual. As South Africa’s extremely high levels of unemployment and inequality persist seemingly unabated and compounded by weak economic prospects, the EFF may grow from its relatively marginal (numerical) position in the national legislature into a strong contender given its strategy to attract primarily young and marginalised Black voters. The August municipal elections will demonstrate whether the ‘Marxist-Leninist-Fanonian revolutionary movement’ can sustain swift growth and – most pertinently – convince voters it offers a credible approach to governing at a municipal level.

Beyond the potential challenge of the EFF, the emergence of a new student and youth politics in South Africa perhaps presents an even larger long-term challenge for the DA. As young people increasingly demonstrate disenchantment with party politics and opt for other forms of political organisation, according to a 2014 Institute for Security Studies voter participation report, political parties may struggle to grow youth support in the medium to long-term. Large-scale rolling student protests and occupations at tertiary institutions in 2015, most notably the #FeesMustFall protests against university tuition increases culminating in a Presidential intervention, appear to vindicate this claim and suggest political parties may have to re-strategise to win over young voters. Former Democratic Alliance Youth Leader Mbali Ntuli remarked in January 2016 that many young people “don’t have faith in political parties” and that the latter would need to “speak to their needs which are education and the unemployment crisis”.

The messages emanating from youth protests in 2015, however, demonstrated much deeper disillusionment in South Africa than just towards extremely high youth unemployment and poor access to quality education although these are evidently key sources of frustration and despair. Issues brought to the fore included the call to decolonise tertiary education institutions; the eradication of structural racism and structural exclusion of the majority of Black people from South Africa’s economy, the scourge of gender-based violence and rape, and historical injustice with respect to land ownership, among others. Whether the DA as a self-proclaimed ‘liberal’ alternative can improve its electoral position among young voters after this radical shift in youth politics in 2015 may be a key litmus test as to the appeal of their purported politics of ‘equal opportunity’ over the restlessness from below for systemic transformation and redistribution.

In response to a query on economic transformation, specifically the content of the DA’s Broad-Based Black Economic Empowerment (BBBEE) philosophy, Maimane retorted that there is “no debate in the DA about the need for redress and race as a proxy for disadvantage, but we need to oppose BEE being captured by politically-connected individuals”. The DA’s Johannesburg Mayoral candidate and business magnate Herman Mashaba, however, had previously attracted criticism over “flip flopping” on the issue, having initially said that government had used their Black Economic Empowerment policy to “divide people along racial lines” and that he “did not want to be regarded as black, but as South African” before back-tracking on the issue. Political analyst Dr Mcebisi Ndletyana previously said these comments feed on the DA’s inconsistency on issues of race. Whether Maimane as the first Black leader of the party offers sufficient clarity on issues of race in the DA’s policies to satisfy young voters craving multiple and related societal transformations is likely to impact its long-term viability as an opposition in a country deeply scarred by colonial and apartheid legacies.

‘What would Mandela do?’

Prior to closing, the Director of the LSE Africa Centre and Head of the Department of International Development Professor Tim Allen challenged Maimane as to whether he thinks Nelson Mandela would have voted the new DA leader. “I don’t believe he [Mandela] was a man who would stand for corruption and racial mobilisation,” Maimane retorted. “Nelson Mandela went to Davos, came back and really articulated an economic policy to make it easier for markets to thrive,” he said. Reiterating with clarity the DA’s ‘pro-market’ position, often dubbed ‘neoliberal’ by critics, Maimane said the “only place where those values exist today are in the DA and not in the ANC”. On this basis, Maimane argued that he is “convinced Nelson Mandela would vote for the DA”.

Watch or listen again to Mmusi Maimane, Leader of the Opposition in South Africa’s National Assembly and the Democratic Alliance’s Federal Leader, speaking at LSE on 21 June.

Marc Davies is a Masters student in the African Development programme at LSE. Follow him on twitter @MarcDDavies.

#DRCongo: where a decade of failed democracy has exposed the electoral fallacy 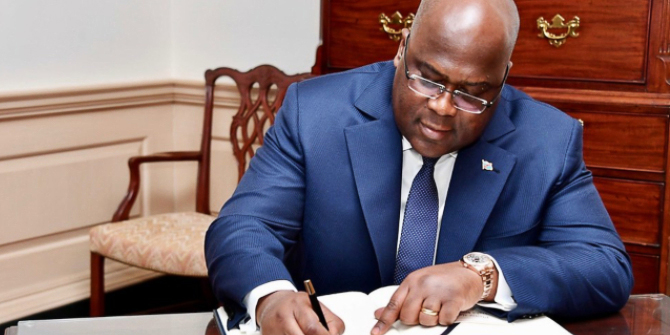