Fabien Cante says this book is an exciting and  hopeful compendium of urban struggles across the Global South.

Urban Revolt is an edited collection bringing together case studies of grassroots mobilization in cities of Africa, Latin America and South Asia. Two of the editors, Trevor Ngwane and Luke Sinwell, are based in South Africa, and the South African context acts as a kind of reference point for the book’s overall argument. Together with Immanuel Ness, the third editor (based in the United States), Ngwane and Sinwell are concerned primarily with workers’ movements, though they attempt to connect workplace struggles with struggles over homes, infrastructure and government accountability. The editors’ strategic preoccupation with working-class consciousness and organizational effectiveness imbues the book with an activist energy that is mostly insightful and convincing.

One of the book’s key contributions is thus to show that “people’s movements,” as the editors call them, are alive and multi-faceted in cities of the Global South. This contrasts with a tendency in the literature on Southern cities to portray the poor – which often constitute a majority – as a uniformly downtrodden mass, deprived of political agency and even consciousness by the crushing jaws of global capitalism. Urban Revolt also addresses a tendency of the literature on urban social movements to focus on European and North American cities, and derive theoretical generalizations from this relatively specific context. One of the book’s aims, then, is to provide the beginnings of a theory of urban social movements grounded in the varied experience of postcolonial cities.

Urban Revolt‘s broad range of case studies is the book’s strength and simultaneously its weakness. Most chapters are nicely contextualized. The chapters by Sinwell and Ngwane on South African mining peripheries offer particularly vivid descriptions of recent protests and political reconfigurations following the infamous massacre of striking miners at the Marikana platinum mine in 2012. The chapter by Claudia Delgado Villegas on “new landscapes of indignation” in Mexico features a detailed panorama linking urban protests, provincial histories and indigenous voices. Patrick O’Hare’s discussion of unionism and mobility in Montevideo’s largely informal recycling industry provides a stimulating blend of thick description, history and organizational questions. The closing chapters on Kolkata and Jakarta both offer analyses of recent changes in urban governance regimes and planning ideologies, as well as the resistance movements that they sparked. Throughout the book, the publishers have done a fantastic job including photographs for almost every chapter.

The case studies presented in the book clearly resonate beyond the context that they describe. Simone da Silva Ribeiro Gomes’ consideration of what it means to be politically active in a violent periphery of Rio, for example, raises some questions that would be relevant in other marginalized urban spaces, such as the Paris banlieues. However, these connections – starting with those between the book’s different chapters – are not always evident. In large part, this is because the theory is lacking to make individual stories converge, or at least to offer a basis for comparison. My point is not that research on people’s movements in Southern cities requires a unifying frame, but that there would be much to gain from a more in-depth discussion of the book’s core concepts – starting with those in the title.

The urban, for example, might have been more productively interrogated. What do cities have to do with the movements described? And why? In some cases, such as Claudia Villegas’ chapter on Mexico, the city appears merely as a backdrop to grievances stemming from the provinces. In Ngwane’s and Sinwell’s South African chapters, the mining compounds and the informal settlements that surround them, on the remote periphery of Johannesburg, offer a very particular vantage point on the city, one that would have been fascinating to discuss in relation to broader urban theory. Furthermore, informality, a key concept guiding urban research in the Global South (for better or worse), is not systematically worked into the book’s overarching reflections on poverty, activism and power.

Equally, the concept of urban social movements has been the object of much theoretical debate over the last decades, a debate which is not fully referenced in the book. This is unfortunate because Urban Revolt would have much to contribute to the existing theory, including a challenge to Eurocentric conceptualizations. Here again, the South African chapters do make strong theoretical propositions, especially about how new struggles on the urban peripheries bring together workplace and domestic grievances (starting with housing and infrastructure provision). Yet these reflections could have been more encompassing, and could perhaps have served to explain more clearly how South Africa can act as a kind of pivot for comparison across the Global South.

Last but not least, the book’s subtitle mentions “state power” as a counterpoint to grassroots urban movements, but the authors’ understanding of the state and its urban manifestation are too rarely expanded upon (with some exceptions, like Patrick O’Hare’s detailed discussion of politics in Montevideo). As a result, the struggles of the urban poor are too often pitted against an abstract and all-encompassing notion of global neoliberalism, presented as a natural and efficient collusion between global capital, state and local authorities. Yet there is strong debate in urban studies over whether neoliberalism can and should serve as a unifying frame to understand what is happening in Southern cities. There is also a growing literature on the urban poor’s relations with, and perceptions of, the state, that might be productively drawn in.

In the book’s introduction, the editors note that Urban Revolt is only “the beginning of a much more thorough political research project that aims to link isolated struggles in urban areas more integrally to each other” (p. 11). The book provides an exciting and (to some extent) hopeful compendium of urban struggles across the Global South. It does a great job highlighting some of the questions that need to be most urgently addressed for the future, and showing that the stakes surrounding grassroots mobilization in Southern cities are higher than ever.

Urban Revolt: State Power and the Rise of People’s Movements in the Global South, edited by Trevor Ngwane, Luke Sinwell and Immanuel Ness 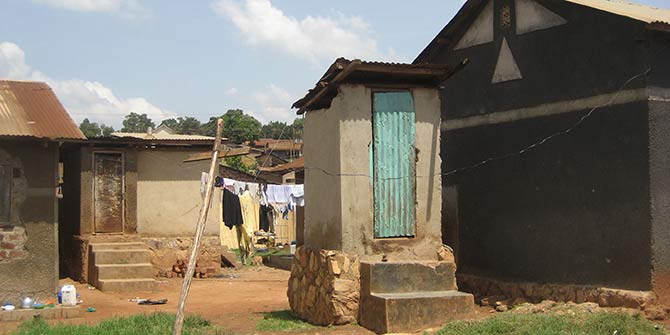