In the imagination of Tunisian youth, emigration has become synonymous with emancipation. Research conducted on the attitudes of young Tunisians finds links with the country’s political-economic conditions, with political disenchantment following the ‘Arab Spring’, combined with high unemployment, revealed as a significant factor.

In 2011, Tunisian youth revolted against the political establishment and started what observers called the ‘Arab Spring’. These popular uprisings were held against the dictatorship of Ben Ali and the repression and marginalisation suffered by Tunisians. Despite the prominent role the youth played in leading to the ousting of the regime, eight years later new leaders are failing to answer to young people’s needs and aspirations.

I conducted a qualitative study with young Tunisians under 35 years of age from Tunis, Douz and Kébili in spring 2019, focused on young Tunisians’ experiences eight years after the revolution. It underscored the younger generations’ widespread disenchantment with the revolution’s outcomes, and the fact that their lives continue to be as hard and difficult as they were before. In some cases the situation has worsened. Young Tunisians who participated in the study stated that although the 2011 uprising brought them civil liberties, it has also led to the deterioration of country’s economic and social conditions, especially for them.

In this context, migration has become an important strategy for overcoming these hardships. In fact, emigrating in the imagination of Tunisian youth has become synonymous with emancipation. The interviews highlighted the links between such attitudes towards migration and young people’s views on their country.

Migration phenomenon in Tunisia is commonly known as Harka, a term that simultaneously means to risk the prohibitions on migration, largely driven by the European Union’s security agenda, and to burn items of identification to avoid repatriation should they be caught.

A European Commission study, conducted from 2014 to 2015 with young people between the ages of 14 and 35, showed that about 53 per cent of young Tunisians are willing to migrate, mainly to Europe, North America and the Gulf. Similarly, according to a study conducted in 2016 by the Tunisian Forum for Economic and Social Rights, about 31% of young people are ready to migrate in a way that is ‘non-regulatory’ (illegal), given the barriers to obtaining a Schengen visa and the frequent refusals by European consulars based on permitting only the most highly qualified candidates. The desire to leave the country reached a new peak in 2017.

Many young people we interviewed stated that their desire to migrate was driven by a lack of institutional support for training to enter the Tunisian labour market. Ahmed, a 21-year-old from Kébili, said:

‘Despair suffocates us! Faced with the impossibility of realising [our dreams] or even thinking about a life project, the only solution for us is emigration’.

‘Young people [in this country] live in a prison without walls.’

‘They are cutting our wings … we cannot grow and fly in this country.’

The education environment and unemployment

On the one hand, the education system no longer meets young people’s aspirations and fails to promote upward social mobility. It is largely based on theoretical models, which do not offer adequate practical skills for the market. This partly explains a school drop-out rate of 100,000 per year, according to figures released by the Tunisian Ministry of Education. These young people generally become candidates for illegal emigration.

On the other hand, many young people who expressed an interest in migration are highly educated. The structures of the Tunisian economy continue to be unfavourable to job creation, and there is a big gap between the expectations of the labour market and graduate skills. Indeed, a large proportion of young Tunisians who pointed to migration as a solution to their situation include all those who are unemployed, students, non-graduates, graduates and those with precarious jobs.

It was unsurprising that the majority of our interlocutors during the study cited unemployment and economic hardship as the main factors pushing them to leave the country. As a young Tunisian from Tunis explained:

‘Our major concern in Tunisia is the lack of work. I did everything to find a job! In vain! My parents spent a lot of money on my studies to get a good job. But it’s impossible!’

We asked a young respondent in Douz ‘why many youths risk their lives to go to Europe’. He answered:

‘It does not matter if I die; the main thing is to try the crossing. For us, young people, the status of unemployed frustrated for a long time is a slow death, which is why we are resorting to risking everything and try[ing] the crossing.’

Many of the young participants acknowledged the dangers they can face, both during the sea crossing and in the country of destination. However, they were adamant that migration, and most likely illegal emigration, was their only hope. Since 2011 more than 35,000 young Tunisians have migrated illegally to Europe.

The country’s political situation was also a concern for the young interviewees. After the revolution, they had hoped for a wider representation of the youth in national politics. However, the older generations’ power grab marginalised the same social group that played a major role in the revolution. Despite their numbers, their exclusion by large from formal political processes is attributed to continuing age-based systems of authority, evident in adult-centered public policies, social norms, visions and values.

Asked whether young people continue to play an active role in the transition and have greater visibility in government as a result of the political changes, a respondent from Tunis said:

‘Unfortunately, it was the opposite. There are more old people in power, that’s what leaves us demobilised.’

‘Our president is 92 years old, so how can he be attuned to the needs and aspirations of young people?’

While young people’s motivations for emigration appear to be similar, their origins and socio-economic backgrounds are varied and complex; yet they all consider themselves marginalised. They are victims of the absence of youth-centered politics and development policies based on investment into training and conditions for a greater job market, for young people both qualified and unqualified. This accentuates their socio-economic exclusion and reinforces such a desperation and readiness to leave in search of better futures, even when it risks their lives.

Understanding the reasons and the consequences of young Tunisians’ illegal migration may, in the long-term, provide an opportunity to develop policies that create better employment conditions internally, while offering mechanisms that facilitate young people’s access to decent work abroad. Efforts to address this phenomenon should not be reduced to the government’s current repressive measures, such as the criminalisation of illegal migration and the detentions of illegal migrants.

The respondents emphasised that any solution must be part of a comprehensive and integrated approach that takes into account their right to freedom of movement, and takes measures to confront the discrimination they face from European countries in terms of access based on their socio-economic origins. For young people, these are fundamental principles of democracy, a respect for human rights and dignity.

The research was conducted with Centennial Professor Alcinda Honwana at LSE’s Firoz Lalji Centre for Africa.

Hajer Araissia holds a PhD in Demography and is currently a postdoctoral researcher at the Faculty of Humanities and Social Sciences at the University of Tunis. She has conducted substantial field research and published several articles on the topic of international migration. Araissia is also a civil society activist holding different positions, such as project developer and project coordinator. 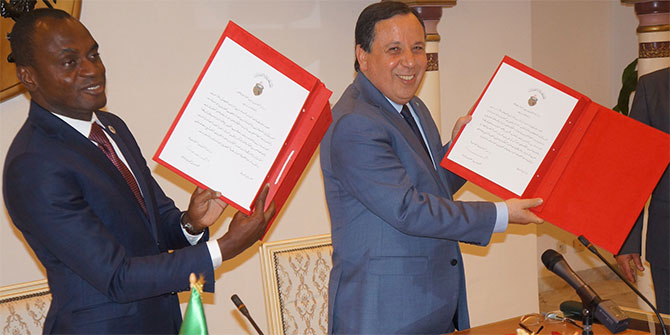 Bad Behavior has blocked 5719 access attempts in the last 7 days.