Recent calls to increase mental health interventions in post-conflict settings omit crucial evidence on their social impact. Indeed, Western narratives around trauma and PTSD can obscure the needs of its recipients. Research on ex-LRA combatants in Uganda highlights why health interventions should engage critically with the lived realities of those it seeks to assist.

Based on a paper in Anthropology Today, this is the second in a two-part series on the anthropology behind ‘trauma’ in war-affected and post-conflict settings.

Treatments for post-traumatic stress disorder (PTSD) and trauma play an important role in advocacy for financing in global mental health, called upon frequently by non-governmental organisations (NGOs) and governments to scale up mental health interventions. Our research in northern Uganda has analysed the social impact of such interventions addressing PTSD, and the social ramifications of introducing trauma discourses and conceptions of suffering based on Euro-American notions of the ‘traumatised individual’.

The research took place in the wake of a twenty-year war between the government and the Lord’s Resistance Army (LRA) – a rebel group that abducted over 50,000 people, about half of whom were children, forcing many to become soldiers or, in the case of young girls, ‘wives’ to the commanders.

A common narrative has vaguely described the population as being collectively traumatised, while specific projects targeted groups who are expected to manifest a range of symptoms or behaviours. Interventions range from counselling, mostly delivered by untrained local staff, to various poorly monitored psychological therapies and the distribution of psychiatric drugs, usually without prescription by qualified professionals.

Promoting externally defined conceptions of war trauma in northern Uganda has had considerable socio-economic ramifications on returnees and wider society. While people are obviously deeply affected by traumatic experiences, external conceptions rely on a Western cultural and moral approach to extreme suffering, ringing immediately familiar to Euro-American ears and conveying a specific image of an emergency.

Speaking the ‘right’ kind of trauma

Narratives of victimhood that strongly resonate with such Western ‘trauma discourse’ have become a form of currency in the region. Their frequent appropriation and heavy marketisation by NGOs and charities seeking to justify their operations has created social hierarchies with serious impacts on people’s lives. As the possibility of receiving support heavily depends on individual narratives fitting donor-backed conceptions, those who can capitalise on their own narratives of suffering gain access to benefits and social leverage, becoming unlikely winners in a post-conflict setting where rebuilding lives is challenging.

Based on research since 2004 on the effects of the war, we have found a disparity in access to the largely material benefits associated with trauma narratives. Our work shows a substantial cohort of those who achieved command positions in the LRA or the status of senior wives have strategically adopted preferred modes of describing experiences, and thereby secured better livelihoods, including skills training and school fees.

Specifically, this means that they speak about their experiences in ways that fit trauma paradigms expected by aid-funded projects. Their accounts are often openly refined and shaped in peer support meetings so that the ‘right’ kinds of things are emphasised. Those in the group have usually spent long periods of time with the LRA and almost invariably live in urban locations. Their lives are not easy, and they may well remain profoundly troubled by the lives they led with the LRA, but they are unlikely to be openly stigmatised by neighbours and rarely report affliction by cen, a form of spiritual affliction associated with those who have been in contact with violence and death.

In contrast, most of those returning from the LRA who are not former commanders or senior wives give accounts that are often more nuanced, and do not necessarily follow anticipated trauma narratives, thereby making them less interesting to trauma advocates. They are acquiescent and adhere to social norms, desperate to move on with their lives and not to be treated differently. Yet, we found many of them are deeply troubled. They are much more likely to suffer acutely from stigmatisation and cen, often experiencing dire and traumatic suffering many years after their return. The disparity in opportunities to capitalise on internationally-conceptualised trauma narratives to secure resources and practical assistance often results in their marginalisation. Less able or willing to craft their story to fit the ideas of NGOs and therapists, and now living far from the towns, they remain largely invisible to such well-meaning actors.

Arguments for urgently upscaling mental health interventions of the kinds highlighted by the new review in The Lancet should be treated with caution. Anthropological engagement with universal trauma discourse seems to have had no significant effect on what is being promoted so vigorously as best practice and the model for future trajectories of interventions in war zones and regions post-conflict. On the contrary, evoking anthropological contributions that work within the hegemonic paradigms largely serves to reinforce existing agendas. Thus, The Lancet review alludes to unhelpful aspects of assuming the universality of diagnoses and treatment as a way of ticking a box, while asserting an urgent need for rapid upscaling of current arrangements.

Our research suggests that instead there is an urgent need for humanitarians and clinical practitioners working in this arena to critically reflect on normative assumptions, and to adequately engage with understanding the lived realities and livelihoods of the people they seek to assist. We have found no social benefits from promoting internationally-generated (and debated) classifications of war trauma, and few positive effects for individuals. Where positive effects occur, they are likely to be in terms of livelihood support. In practice, we find that current externally supported approaches to mental health systematically elicit the symptoms of affliction they purport to address, and may actually exacerbate problems.

Costanza is a PhD candidate at the London School of Economics studying mental health and psychosocial interventions in complex emergencies, with experience in researching social suffering in post-conflict settings, and in providing consultancies on psychosocial humanitarian aid.

Sophie Mylan is a medical doctor by background trained in General Practice. After obtaining an MSc in Medical Anthropology at Brunel University, Sophie conducted fieldwork in an Internally Displaced People’s camp in northern Uganda in 2010 where she developed a specific interest in the contribution of ethnographic methods to global health. 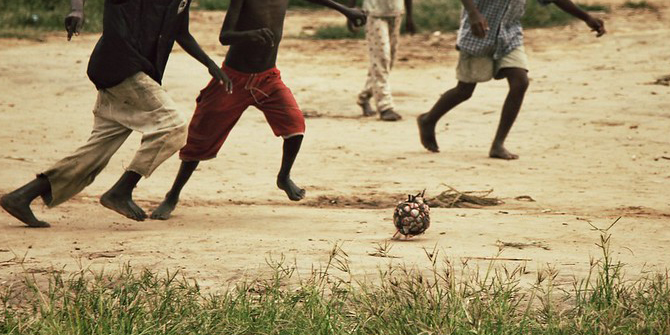