Fin-tech platforms like M-Pesa have revolutionised finance in Kenya. At the same time, they have put innumerable livelihoods at peril and pushed many into poverty. African countries seeking to adopt similar platforms should be careful to avoid Kenya’s pitfall, by regulating predatory lending and gambling while allowing access to capital critical for development.

To a global audience, the story of mobile money service M-Pesa is un-African. It is a story of technology meeting creativity in an arena that is expected to be devoid of either. So unique is the narrative around M-Pesa that it has gained a cult global following, earning mentions in every development forum and cementing its place in international development textbooks. In practice, the service allows for branchless banking through SMS, effectively leapfrogging the need for internet connection or conventional banking infrastructure.

The M-Pesa platform has been around for a little over a decade and received great acclaim among development practitioners, touted somewhat as a panacea to poverty challenges. As a result, there have been efforts at replicating the platform across developing countries, from Afghanistan to Romania, with different degrees of success. An article in the journal Science by Tavneet Suri of MIT and William Jack of Georgetown – two development stalwarts – went as far as claiming that the platform increased per capita consumption levels and lifted 194,000 Kenyan households (2% of all households) out of poverty in only a few years.

With such metrics at play, it would seem somewhat preposterous to insinuate that M-Pesa could be detrimental to financial inclusion and poverty eradication efforts. However, since the debunking of Suri’s article amidst concerns of glaring errors and omissions, there is a need for a closer look at the impact of M-Pesa on financial inclusion efforts in Kenya. It is crucial that other countries trying to adopt the M-Pesa model to further financial inclusion learn from its shortcomings.

M-Pesa has been hailed for making it possible for poorly collateralised low-income borrowers, especially from remote rural areas, to access financing and short-term lending. This niche group has traditionally been out of reach, until tapped into by mobile network operator Safaricom, M-Pesa’s parent company, and other small lenders. With few other alternative avenues to access loans, this market segment is highly vulnerable to exploitation.

In January 2019, Safaricom launched an overdraft facility, Fuliza, which targets poor customers who have run out of digital credit. In the first month of its promotion, more than $60 million was borrowed at a minimum cost of 30% of value borrowed per month, with some bands attracting costs as high as 60%. The value of these loans shot up to $800 million in the first half of 2019.

Another popular service offered is M-Shwari, a micro loans lending facility where borrowers can borrow as little as $1. Within its first two years of operation, this service disbursed $2.3 billion in loans at more than 100% annualised interest. The company refers to its interest rate charges as ‘facilitation fees’, which stand at 7.5% of the loan borrowed and payable within 30 days. This nomenclature helps the firm avoid regulation as a financial institution. Any balance past the 30 days rolls over to the next period and another fee of 7.5% is slapped onto the cumulative debt. Finally, the company’s airtime credit platform Okoa Jahazi charges 10% of credit borrowed with repayment expected within five days.

When annualised, the interest rate for such loans can be as high as 500% compared to the 12.8% average rate advanced for commercial loans in Kenya. These rates, akin to usury, make Shylock the villain in Shakespeare’s The Merchant of Venice seem woefully amateurish. Since no real value add is likely to come from micro loans as low as $1 with full repayment expected between 5 and 30 days, the loans push borrowers deeper into debt. The Kenyan government in its wisdom has shied away from regulating Safaricom’s forays into finance, arguing for the need to foster innovation. This has in turn attracted more fin-tech firms such as California based Tala and Branch which ride on the M-Pesa platform. These firms charge around 20% interest per month.

With 50% of borrowers in Kenya paying their loans late, unscrupulous lenders are raking in obscene returns. A report by The Consultative Group to Assist the Poor (CGAP) shows that while the case for digital lending has mainly focused on credit for daily cash-flow needs and emergency liquidity for micro enterprises, digital loans are mostly used to cover discretionary consumption. Consequently, by 2017, more than 2.7 million Kenyans had been blacklisted by the credit reference bureau (CRB) for default on these micro loans. A listing on the CRB can be debilitating with employers often requiring clearance certificates from the CRB before any employment consideration.

Another major beneficiary of the M-Pesa platform in Kenya is the gambling industry. According to the Kenyan government, online betting companies drew in $2 billion in 2018, a hundred times more than they did five years back. About 76% of Kenyan youth concede to having tried gambling and, compared to other African countries, Kenyans gamble more frequently, encouraged by the ease with which bets can be placed and payments made using mobile money. According to a report by GeoPoll, 96% of all gamblers in Kenya do so using their mobile phones.

Sportpesa, the most prominent of the betting firms in Kenya, was so profitable that it had taken on sponsorship of English football clubs, a first for an African company. The company funnelled its profits outside Kenya into horse racing and Formula 1 teams, pointing to how removed its Bulgarian investors are from their Kenyan clientele. After a government clampdown on gambling in late 2019, the company has since terminated its operations in Kenya.

Next steps for fin-tech in Kenya

Proliferation of fin-tech in Kenya and sub-Saharan Africa cannot be reversed but, going forward, it should be harnessed to improve people’s lives and ameliorate the damage it causes. Now, fin-tech is being used to extract value from poor households through high interest loans and gambling. This extraction script has been used before, leaving lands bare and countries reeling from poverty. As we hail the penetration of fin-tech to areas traditionally sidelined by mainstream finance, we must also realise that this same ‘progress’ could undermine poverty eradication efforts by taking away the few resources that these communities have accumulated.

To this end, African governments should learn from Kenya’s case and step up regulatory capacity in order to protect vulnerable citizenry. Treating such fin-tech platforms like M-Pesa the same way as they treat financial institutions would mean stricter oversight through central banks and, subsequently, fewer avenues for exploitation. As an aside, no single platform should be so critical to a country’s financial infrastructure as to annually process the equivalent of 50% of its GDP – as does M-Pesa. Overreliance on such a platform could bring an economy grinding to a halt in the event of a hick-up. An outage lasting a few hours in December 2018 is said to have cost the economy billions of shillings.

In addition, these platforms should be closely monitored to avoid abuse. While access to financing and capital is critical for development, exploiting SMEs and individuals through exorbitant rates is akin to enslavement with debtors, forcing them to work all year round to repay the loans while the owners of capital appropriate any gains. The large profits that are often repatriated abroad, moreover, soak away discretionary expenditure and ultimately wring dry domestic consumption. It is incumbent upon African governments to make sure that their citizens are not exploited in pursuit of financial inclusion.

Photo: ‘Wikipedia on a basic phone’ by Wikimedia Commons is licensed under creative commons (CC BY-SA 3.0).

Elijah Kimani is a Kenyan economist based in Washington DC specialising in debt and revenue mobilisation. His regional focus is on sub-Saharan Africa and he is a frequent contributor at the African Center for Economic Transformation (ACET). Mr Kimani is a graduate of Princeton University's Woodrow Wilson School of Public and International Affairs.

Has ethnic favouritism in public sector hiring in Kenya and Uganda been exaggerated? August 1st, 2019 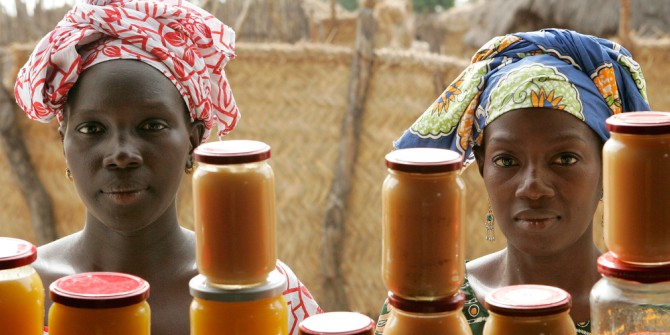 Hyperinflation and distrust in Zimbabwe

Bad Behavior has blocked 3712 access attempts in the last 7 days.