Government lockdown measures to prevent the spread of COVID-19 will heighten mental health issues and increase domestic violence. Women and girls in particular are at increased risk of crimes committed by co-inhabitants. Lovejoy Mutongwiza talks to organisations in Zimbabwe seeking to support women’s and children’s rights during the current health crisis, and their ongoing work to tackle gender based violence.

One by one, countries facing lockdowns and movement restrictions due to the COVID-19 have been reporting an alarming surge in Gender Based Violence (GBV) cases. Although GBV has been widespread before the pandemic, it has, however, worsened in the last two months worldwide.

Today, domestic violence, especially against women and children, seems to be worsening as families struggle with anxiety, economic stress and live in close physical proximity to one another. With 28 cases of COVID-19 already confirmed in Zimbabwe by 23 April 2020 and three deaths, the government’s fight against the global pandemic is expected to mean more days of enforced social isolation, which poses a huge threat of more cases of GBV being reported.

The National Peace And Reconciliation Commission (NPRC) said the increase in GBV cases was worrying, issuing the statement:

‘The NPRC noted a marked increase in Gender Based Violence (GBV) and implores families to take advantage of this lockdown to build sound relationships, mend broken ones, appreciate one another and live in peaceful coexistence. … The State is urged, as prescribed by the law, take all reported cases of GBV seriously and protect all victims and survivors of GBV during this period.’

A pandemic within a pandemic

Tafadzwa Meki, Founder of Someone Always Listens Toyou (SALT) told me the ongoing lockdown due to the coronavirus pandemic has not made the issue of GBV any easier; it has created a pandemic within a pandemic.

‘The socioeconomic effects of the pandemic coupled with living in the same space for a continued period of time have seen an increase in GBV cases … The mandatory lockdown has seen many victims being trapped with their abusers and not knowing where to go or how to get help during lockdown.’

She implored the government to provide resources to mental health practitioners to enable them to work in partnership with other essential services during the lockdown and beyond. ‘This will curtail the mental meltdown that is likely going to be witnessed beyond COVID-19,’ Meki further stated.

So often mental health services are not available for survivors of violence in Zimbabwe and, where available, they are rarely integrated into the primary health care system.

The difficulty of reporting incidents

Because the abuser and victim share the same space, it becomes very difficult to report such issues as the former may overhear the report, which further puts the victim’s safety at risk. During the lockdown period, a phone call to seek help can prompt aggression.

According to Ekenia Chifamba, Founder of Shamwari Yemwana Sikana (SYS), an organisation that advocates for the rights of young girls, one in every three women in Zimbabwe between the ages of 15 and 49 are abused in their lifetime, and now cases are quickly rising.

‘As SYS, since the lockdown began, we have addressed more than 12 cases of GBV. This is largely due to the home setups … For most of the young girls, they are spending most of their times confined in spaces with people close to them … and perpetrators are usually those close to the victims. Also, most women who were previously abused by their husbands are now spending time with their abusive spouses in the same houses.’

Prolonged periods of abuse will often cause the victim’s mental breakdown. Chifamba added:

’Imagine being with your abuser 24/7 and you haven’t had support in terms of counselling, mental support, legal advice and you are not in a safe shelter. That is very traumatic and painful because there is a high chance of the same thing happening regularly since it will not have been reported.’

Fatima Mapuke, a Community Psychologist, said there is a danger that the lockdown will likely expose those with underlying mental health issues, who might not handle the new situation well, to abusive crimes, both as a victim and perpetrator.

‘The reality of COVID-19 is stressful in itself; the longer people have to share the same space, the more likely they are going to step on each other’s toes. There is general panic which might exacerbate mental health symptoms to everyone also causing others to become abusers while others become victims … More so, it will probably heighten symptoms of those with underlying mental health challenges, so we would encourage people in these times to be more gracious to each other, let’s try to be better people.’

She said it is imperative for people to know who to report to should they encounter these problems. ‘As the Zimbabwe Psychological Association, we have put in place an initiative where people can actually call in right now during the lockdown. We have psychologists who are willing to offer their services for free,’ she said.

Child rights expert Maxim Murungweni takes the view that the socio-psychological impact of GBV on children is overwhelming because children will be confined to their family environment.

‘During lockdown we have seen increased risks to child abuse: physical, psychological distress and neglect. The fact that the majority of perpetrators of child abuse are people known to the child makes homes high risk places and once this abuse happens whilst children are confined within this same space they might not be able to report … This then impacts their mental health since they cannot receive the emotional and mental support they should get.’

He added that there is also risk of continued traumatisation since the children will be still be staying in the same abusive environment. ‘So child helplines then become important since children can access those and receive online over the phone emergency counselling and referral services,’ he said.

For Meki, providing both women and men with comprehensive and gender-sensitive mental health services that can allow them to take back control of their bodies, sexuality and lives after the lived experiences of gender based violence is key.

‘Efforts have been made by organizations such as MUSASA and Shamwari Yemwana Sikana to alleviate and offer assistance to survivors. But the question still remains; when the wounds heal does the mind heal just like that too?’ Meki said. The repercussions of the COVID-19 pandemic could be long-lasting, and organisations that provide support to women and girls, in particular, should be properly supported.

Photo: The Voices of Rural Women event on gender based violence in urban and rural areas on 15 March 2018, organised by the Permanent Mission of Zimbabwe. Credit: UN Women/Ryan Brown. Licensed under creative commons (CC BY-NC-ND 2.0).

Lovejoy Mutongwiza is a Zimbabwean award winning photojournalist for 2019 and senior reporter for one of Zimbabwe’s leading media organisation, 263Chat. He has interests in human rights issues and political stories. Besides writing, Lovejoy is a top photojournalist who tells his stories through the lens, which won him the Photojournalist of the year in 2019. He can be contacted on lovejoymtongwiza@gmail.com. Twitter: @ljaymut10 Facebook: Lovejoy Ljay Mtongwiza 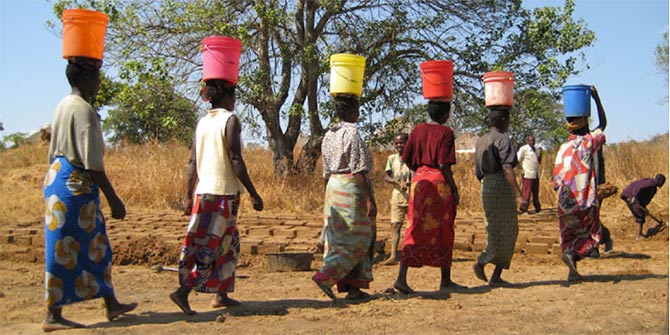 Bad Behavior has blocked 4080 access attempts in the last 7 days.